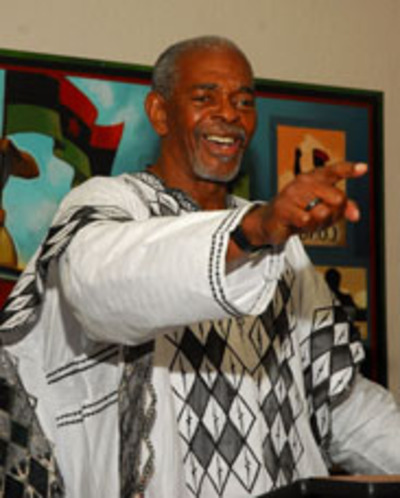 Be prepared to take action! Call in to the US, British and Sierra Leone embassies—numbers below! Watch Uhuru News for timely updates on this situation.


St. Petersburg, FL. Omali Yeshitela along with a delegation of five other citizens of the U.S. and Britain are leaving for Sierra Leone today joining four others for a historic conference of African workers despite the fact that martial law is in force in that country with checkpoints and curfews.

Omali Yeshitela is Chairman of the African Socialist International, leader of the Uhuru Movement and Chair of the Black Is Back Coalition for Social Justice, Peace and Reparations.

Yeshitela is traveling to Sierra Leone less than a week after the successful Black Is Back demonstration in Washington, DC on November 7 challenged the Obama administration on its war policies against oppressed peoples around the world and inside this country.

The purpose of the trip is to participate in the founding of the African People’s Socialist Party-Sierra Leone, the first registered socialist party of African workers to challenge the anti-democratic government.

Other activities on the 13-day trip include the launching of a community fishing project and radio station.

Yeshitela and delegation have determined to proceed with the trip in the face of the martial law because African workers are struggling for justice in Sierra Leone. The West African country is one of the most impoverished countries in the world even though it has vast natural resources including diamonds and oil.

Diamond workers in Sierra Leone are paid an average of 30 cents a day and the country has the highest maternal mortality rate in the world.

Yeshitela and his group will not be deterred from their plans because the struggle for justice, liberation and reparations for African people must be supported around the world and the conditions for Africans on their own land must be exposed.

For 500 years, since the first assault on Africa and the enslavement of African people by Europeans, Africa has been under colonial and neocolonial domination in which the land, labor and mineral resources are plundered at the expense of Africa’s rightful owners.

While the government of Sierra Leone has instituted checkpoints and a curfew for African people in the country currently, it is well known that African people have no democratic or civil rights normally.

The brutal colonial conditions and the struggle for liberation in Sierra Leone are similar to the struggle of the Palestinian people for control over their own stolen land.

Even without martial law Africans in Sierra Leone face repressive, anti-democratic measures including prohibition of meetings of more than two people without a permit.

Uhuru News is calling on supporters and friends of justice for African people to be on alert to call the following numbers:

Hands off Omali Yeshitela, the Uhuru delegation and the African People’s Socialist Party in Sierra Leone

Defend the democratic rights of African workers in Sierra Leone.