After his arrest this week for taking part in anti-war protests against military orders, York showed its support to Lance Corporal Joe Glenton, a son of the city, by queueing to sign a petition during a massively successful stall. 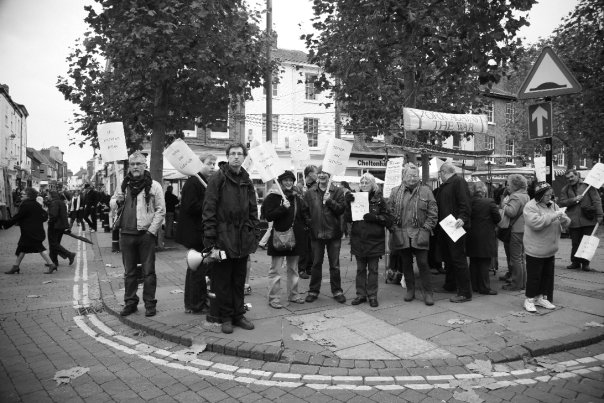 As the stall set up at 1pm, as it has done for almost 8 years, Joe Glenton's supporters were out in force. An email from the imprisoned soldier's mother informed us that she was conveying our protest to Joe after leaving York at 5.30am to reach Colchester, visit him in jail and return later that day.

At a rate of almost 2 a minute for 2 hours, people pushed there way to the stall to sign in support of a man few of them could ever have met. Joe returned a tour of duty inAfghanistan vowing never to return, and when he refused to travel back, was charged with desertion. Making a massively brave stand, and knowing he faced more potential jail time, he led Stop the War Coalition's national march in October. He is now behind bars for speaking out.

Stalls rarely gather press attention, but 2 TV crews and the local rag came to check out the support. The message was clear: Joe is our hero. He may have fought in the war against Afghanistan, but to then have the balls to stand up to his superiors, receiving abuse for "deserting his friends" (many of whom he says are quietly supportive and would do the same but for the penalty). The British government might be going to jail him, but it can be made massively embarrassing to them if the public are prepared to show their support.