Protests against the NATO parliamentary assembly in Edinburgh culminated in its the disruption on Tuesday morning [ Summary report ]. Six Trident Ploughshares activists were arrested when blocking the entrance to the Edinburgh Conference Centre. On Saturday, hundreds of protesters, including some NATO delegates, marched to the Edinburgh conference centre under the banner of the Stop the War coalition [ report ], whilst antifascists resisted a SDL rally in Glasgow.
The NATO Welcoming Committee called for action at the opening of the NATO meeting on Friday, but first the group was kettled by police before the protesters individually and spontaneously rallied in front of the assembly's meeting place.

About a week beforehand the access to the G20 finance meeting in St Andrew's was blockaded by five students and later in the day more than a hundred protesters marched to the Fairmont Hotel against the G20's policies.

The City of Edinburgh Council has also seen a lot of different grassroots groups campaigning against their policies, such as the privatisation of health and support services [ latest update], a bin workers "work-to-rule strike and overtime ban" [ 1 | 2 | 3 | 4 ], manual workers dispute, parents group resisting the closure of schools, fight against funding cuts for community projects and opposition to the regeneration of the lower part of the UNESCO World Heritage Site [ Save our Old Town ] and the initiative to Save Meadowbank . 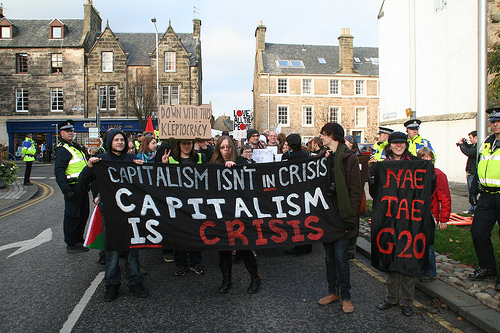