In the last few days Fruit of the Loom/Russell have agreed to meet People & Planet’s campaign demands to reopen the Honduran factory, re-hire all 1200 workers who have been without jobs for 10 months or more and make historic steps towards respecting union rights in the future. View details of the agreement 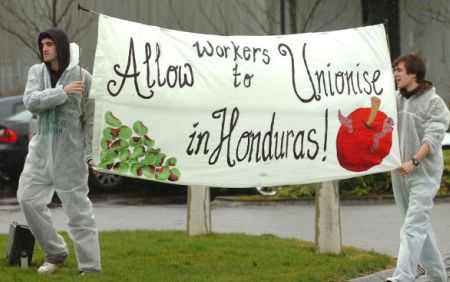 Honduran Union sign historic agreement with Fruit of the Loom/Russell.

In the last few days Fruit of the Loom/Russell have agreed to meet People & Planet’s campaign demands to reopen the Honduran factory, re-hire all 1200 workers who have been without jobs for 10 months or more and make historic steps towards respecting union rights in the future.

Nearly a year ago Fruit of the Looms subsidiary Russell Athletic illegally closed its Jerzees de Honduras factory shortly after workers formed a trade union. The closure left 1800 people with families to feed and provide for, jobless. Reports from the Workers Rights Consortium and the Fair Labour Association concluded that the motive in closing the factory was, at least in part, to stop workers organising for fair conditions.

Students in the UK, USA and Canada responded by campaigning in solidarity with workers by pressuring their universities who sold branded Fruit of the Loom and Russell Athletic garments to boycott the corporation. 9 UK Universities and over 100 universities worldwide boycotted Fruit of the Loom/Russell, making it the largest garment boycott campaign in history. Now the campaign has come to an end in a huge victory.

This is a historic victory for workers rights and for students. Never in history have people forced a multinational corporation to re-open a factory. It has shown that as students we can fight back against exploitation and the race to the bottom.
We can campaign in solidarity with workers and WIN!

The New York Times 2 days ago said:
"This was in no way an overnight victory — it came after 10 years of building a movement that persuaded scores of universities to adopt detailed codes of conduct for the factories used by licensees like Russell. In addition, the students, sometimes through lengthy sit-ins, pressured their officials to create and finance an independent monitoring group, the Worker Rights Consortium, that inspected factories to make sure they complied with the universities’ codes."

A joint statement from Fruit of the Loom subsidiary Russell, the WRC and the CGT Union in Honduras said:
"This agreement represents a significant achievement in the history of the apparel sector in Honduras and Central America"

The fight continues
---------------------------
The Boycott Fruit of the Loom campaign has now set a president; we should build upon our monumental win and continue to fight for the abolishment of exploitation in the garment industry and others.

People & Planets new Buy Right campaign demands that human rights are upheld throughout all of our universities’ supply chains.

Join the campaign and build on this historic victory at your university.

Boycott Fruit of the Loom Campaign