Dying for Crooks: US Troops in Afghanistan

Transparency International reported yesterday that Afghanistan is the most corrupt nation in the world – except for Somalia. ... Heckua achievement, if the only nation on earth that is more shady is one that is full of pirates… Karzai is making Marion Barry look like Mother Teresa. ... The Washington Post reported today that one of Afghanistan’s top ministers took a $30 million bribe to give a special deal to a Chinese mining company. The New York Times reported: “Everything seems to be for sale: public offices, access to government services, even a person’s freedom.” .... So what do Army recruiters say these days? Why in Hades would any American agree to risk his neck to prop up this band of thieves? 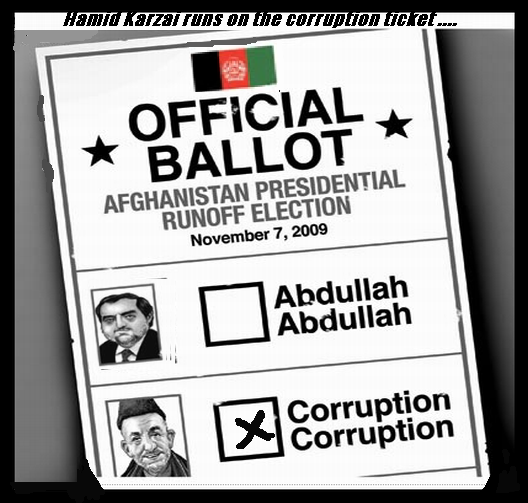 AFGAN WAR IS FOR HEROINE TRAFFICKERS:

http://www.rense.com/general87/d3.htm Italy Ex-President – CIA And Mossad Ran 9-11 "All the [intelligence services] of America and Europe know well that the disastrous attack has been
planned and realized from the Mossad, with the aid of the Zionist world in order to put under accusation the Arabic countries and in order to induce the western powers to take part in Iraq [and] Afghanistan."

http://www.presstv.ir/detail.aspx?id=110130&s... Occupiers involved in drug trade: Afghan minister
General Khodaidad Khodaidad said the majority of drugs are stockpiled in two provinces controlled by troops from the US, the UK, and Canada, IRNA reported on Saturday.
He went on to say that NATO forces are taxing the production of opium in the regions under their control.
Meanwhile, The New York Times reported on Wednesday that Ahmad Wali Karzai, a brother of the Afghan president, is involved in the opium trade, meets with Taliban leaders, and is also a CIA operative.

An Inside Look at Nepotism and Corruption in Karzai`s Afghanistan: An eye-opening inside look at how the system of nepotism and corruption in Afghanistan actually works .......... Pratap Chatterjee is managing editor of CorpWatch and the author of Halliburton's Army: How a Well-Connected Texas Oil Company Revolutionized the Way America Makes War .....