Representatives from London and Brighton solidarity groups picketed the Maison
Languedoc-Rousillon office in London today in protest at the LR department's plans
to build facilities for Carmel Agrexco in Sete harbour. We handed in the attached letter to the office director. 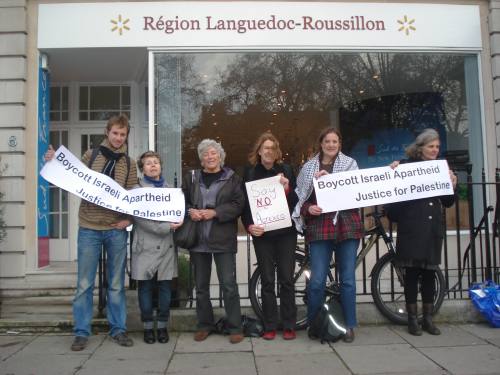 We are a coalition of representatives from UK groups and are demonstrating at the Maison du Languedoc-Roussillon  in London today to protest against the proposal of the Regional Council to establish a project for Carmel-Agrexco in Sète harbour.
Carmel-Agrexco is the Israeli national exporter of fruit and vegetables and exports large quantities of goods from illegal Israeli settlements on occupied Palestinian land.
Israeli settlements and the military occupation make life impossible for Palestinians living in the West Bank. Palestinians in the occupied Jordan Valley, where the majority of Carmel Agrexco's settlement produce comes from, are forced to live in tents and shacks due to building restrictions imposed by the Israeli military authorities. Entire communities live under threat of forced evictions and house demolitions as Israel confiscates more and more lands to annex for the benefit of the settlements and confiscates Palestinian water supplies to irrigate illegal settlement farms. Palestinian farmers are unable to access local or international markets due to Israeli restrictions on movement. Landless Palestinians are forced to work for Carmel-Agrexco, who own packing houses on every major settlement in the valley, receiving poverty wages and with no rights.

By supporting the operations of Agrexco, the regional council of Languedoc-Roussillon is complicit in Israel’s ethnic cleansing of the occupied West Bank, and is abetting violations of international humanitarian law, including the Fourth Geneva Convention. Therefore we object to the proposal of the LR Regional Council to support the racist and colonial policy of the Israeli state, a support embodied in the project for Carmel-Agrexco in the port of Sète.

We demand that regional advisers publicly disassociate themselves from this project and withdraw the proposal.