When bigots attack, we fight back!

After Liverpool City Council forced an anti-homophobia march to stick to the back streets, an angry group set off on an alternative, unapproved, route through the heart of Liverpool's shopping centre 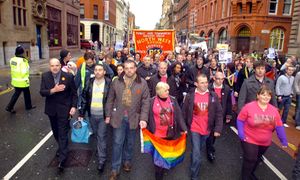 “WHEN BIGOTS ATTACK, WE FIGHT BACK!!”

There was a second anti-homophobia march yesterday, which happened without the permission of the council and (surprise!) went unmentioned in the Liverpool Echo report. Many of the 1500 people who took part in the main march called in response to the recent attack on Stanley Street (amongst many others) were angered at Liverpool City Council’s refusal to allow the march to go through the more populated areas of town, claiming it was too busy with Christmas shoppers (in November!!). Feeling that the march had been made to skulk around the back streets where it couldn’t be seen, an insensitive move to say the least considering the issues at stake (‘Out of the closet. Onto the streets’), a smaller group decided, after the conclusion of the rousing and inspiring speeches at the Picket, to head off into town on an entirely spontaneous and unapproved route through the heart of our city.

The police remonstrated with some of the marchers that “this will spoil everything”, showing just how in touch they are with public anger at recent homophobic attacks. Wisely, they refrained from attempting to physically stop the march. Never had the chant of “Whose streets? Our streets!” been more appropriate as the noisy group walked through Liverpool One and up Church Street and Bold Street, to general astonishment from shoppers, many of who showed their support.

All involved were thrilled at our ability to ignore attempts by the council to tell us where we can walk in our own city (which it still is, despite their best attempts to sell it off to rich property developers). This participant left the march at the Egg for a long-delayed roast dinner but the march continued on its merry way in the direction of the bombed out church and on to who knows where (a brighter future??).

Gay Liverpool councillor Steve Radford said: “It was great to walk through the main shopping area of the city and show that gays and lesbians will not be treated as second-class citizens in our city, and that an injury on one is an injury on all of us. He also read out a message of support for the (official) march from the Bishop of Liverpool, the Rt Rev James Jones, on behalf of all the denominations in the city.

A great and inspiring day, best summed up by the words of one speaker, a councillor who came out very recently and had been so taken aback by the onslaught of homophobic abuse she had encountered since that she had been considering that she might have to leave Liverpool, until she saw the large turnout at St George’s Hall for the march and was reassured that there are lots of good and supportive people here too.

But there is still a long way to go, judging from the experience of other people who feel Liverpool is more unsafe today than it was 20 years ago and the deeply disturbing fact that the worst homophobic hatred today is coming from young people, such as those 12-14 year olds who attacked a young man on Lord Street only last week. The battle continues.