Order Out of Chaos: CIA, Blackwater Responsible for Bombings in Pakistan

CIA bombing campaigns and assassinations, conducted by the mercenary group Blackwater (Now Xe Services), are part of an effort to keep the “barbarians from coming together” and create a situation requiring a continuation and expansion of the contrived global war on terrorism. 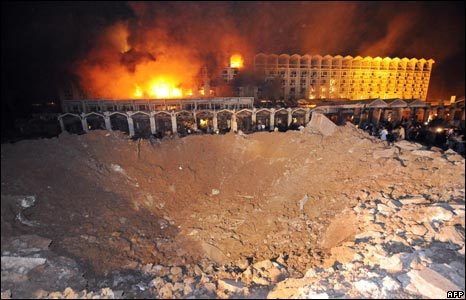 Newspapers in Pakistan have accused the United States of using Blackwater and other agencies to conduct bombings and targeted assassinations in the country, according to MEMRI translations. MEMRI is a neocon propaganda outfit with connections to Israeli intelligence.

“Evidence of the private U.S. security firm Blackwater’s involvement in the targeted killings of high-ranking Pakistani military officials has been found,” reports Haftroza Al-Qalam, a Pakistan weekly published in Urdu, one of the two official languages of Pakistan. “According to a report in the Urdu-language magazine Haftroza Al-Qalam, the recent killings of Pakistani military officials represent an old method used by Blackwater in Iraq and South American countries.”

Journalist Jeremy Scahill reported on the CIA-Blackwater assassination program in August, 2009. See the second part of the report.

Pakistan media and other sources have reported on a Blackwater presence in Pakistan since 2008. “The notorious US security firm Blackwater has reportedly established a presence in the restive tribal belt on the Afghan borders to help the FBI and CIA track down Al-Qaeda and Taliban militants allegedly hiding there and protect USAID projects,” Aamir Latif reported for IslamOnline.

USAID is a a documented CIA front. The fact USAID is essentially a CIA dummy corporation was largely confirmed when the CIA released its ‘Family Jewels’ documents in 2007.

On Saturday, The Daily News in Pakistan reported that Tehreek-e-Taliban Pakistan (described as the main Taliban militant umbrella group in Pakistan) blamed recent bombings in the country on the ISI (Pakistan’s intelligence agency), the Awami National Party, the Pakistan People’s Party and Blackwater. “All these killings by the infamous Blackwater are aimed at maligning the Taliban,” TTP spokesman Azam Tariq told the Daily Times. “The TTP does not believe in killing of innocent citizens, and we will hold those who are doing this accountable.”

In August of this year, The New York Times reported on a Blackwater assassination program. “The Central Intelligence Agency in 2004 hired outside contractors from the private security contractor Blackwater USA as part of a secret program to locate and assassinate top operatives of Al Qaeda, according to current and former government officials,” Mark Mazzetti reported.

The CIA’s highly compartmentalized covert program was not reported to Congress. “According to current and former government officials, former Vice President Dick Cheney told C.I.A. officers in 2002 that the spy agency did not need to inform Congress because the agency already had legal authority to kill Qaeda leaders.”

Senate Intelligence Committee Chairwoman Dianne Feinstein said the CIA broke the law by failing to notify Congress about the secret assassination program. Director of National Intelligence Dennis C. Blair, however, said the CIA did not violate the law when it failed to inform lawmakers about the program.

Beginning in 2002, the CIA conducted numerous strikes against al-Qaeda targets in Pakistan using unmanned aerial vehicles like the MQ-1 Predator and the larger MQ-9 Reaper. The Obama administration not only continued the strikes but dramatically increased the pace.

Journalist and author Douglas Valentine says the CIA program in Iraq constituted a “new Phoenix Program.” The original Phoenix program was used in Vietnam to assassinate communist leaders and terrorize the population into submission. In Iraq, according to Valentine (who references journalist Seymour Hersh), the CIA’s assassination program was used “not just Ba’ath Party members, but anyone who gets their name on the CIA’s blacklist of political and ideological enemies.”

“The recent bomb explosions in Pakistan are of the same nature previously conducted by Blackwater in Iraq,” Haftroza Al-Qalam reports. “The same people are involved in all the terror attacks, including the assassination of Benazir Bhutto and the explosions in Peshawar.”

Cheney had former Pakistani prime minister Benazir Bhutto killed because she decided to back out of a deal not to return to the country after nine years in exile.

“Beg stated that the former Pakistani prime minister was killed in an international conspiracy because she had decided to back out of the deal through which she had returned to the country after nine years in exile,” the Times reported.

Self-made billionaire and business tycoon Hariri was assassinated on February 14, 2005, when his motorcade was bombed in Beirut. Seymour Hersh has accused Cheney of being involved in the Hariri assassination. After the assassination of Hariri, the U.S. accused Syria, although conclusive evidence has never been presented proving Syrian involvement in the murder.

During the election, Obama declared his intention of striking Pakistan if elected. “If we have actionable intelligence about high-value terrorist targets and President Musharraf won’t act, we will,” Obama said. He said he would be willing to attack inside Pakistan with or without approval from the Pakistani government.

Obama’s Secretary of State, Hillary Clinton, indicated during her Senate confirmation hearing that the new administration would “not relent in holding Pakistan to account for any shortfalls in the continuing battle against extremists,” The Washington Post reported in January.

The “extremists” in Pakistan and neighboring Afghanistan, the Taliban and al-Qaeda, were created by the CIA and the ISI.

“Obama has made it clear that his administration’s response to the growth of insurgent Afghan forces and the worsening security situation facing the US and its puppet regime in Afghanistan, as well as the growing strength of anti-US and anti-government insurgents in Pakistan, is an expansion of American military violence both in Afghanistan and Pakistan. The White House and the military are treating both countries as part of a single military theater,” Barry Grey noted in February.

Obama has escalated the “protracted political chaos” in Pakistan and Afghanistan. Chaos is designed to create a political vacuum and allow the U.S. to dominate the region.

Rockefeller minion Zbigniew Brzezinski admitted as much in his book, The Grand Chessboard: American Primacy and its Geostrategic Imperatives. “To put it in a terminology that harkens back to the more brutal age of ancient empires, the three grand imperatives of imperial geostrategy are to prevent collusion and maintain security dependence among the vassals, to keep tributaries pliant and protected, and to keep the barbarians from coming together,” Brzezinski wrote.

CIA bombing campaigns and assassinations, conducted by the mercenary group Blackwater (Now Xe Services), are part of an effort to keep the “barbarians from coming together” and create a situation requiring a continuation and expansion of the contrived global war on terrorism.