Philippines: Abduction and killings of journalists, politicians and civilians

A group of about 45 people (latest news figure is now 57) were ambushed and abducted by about 100 armed men, according to reports. The military recovered the bodies of 13 women and eight men—some of them mutilated. 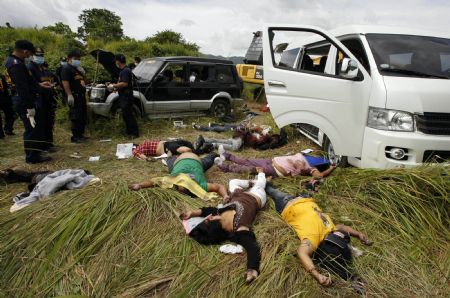 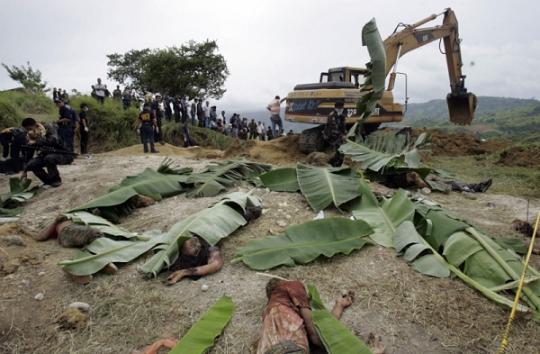 Amnesty International condemns the killings of at least 21 civilians, including journalists and members of a politician’s family, in the southern Philippines province of Maguindanao, the first reported killings linked to national elections to be held in May 2010.

A group of about 45 people (latest news figure is now 57) were ambushed and abducted by about 100 armed men, according to reports. The military recovered the bodies of 13 women and eight men—some of them mutilated.

“These killings underline the danger facing civilians in the run up to the national elections. The authorities must immediately launch an independent and effective investigation into these murders and ensure that they do all they can to prevent killings and other violence,” said Donna Guest, Deputy Asia Pacific Director, Amnesty International.

The sister and the wife of Esmael Mangudadatu, vice mayor of Buluan town, were on their way to file his certificate of candidacy as provincial governor when they were attacked.

“The government must prohibit and disband private armies and paramilitary forces immediately. The authorities should also establish clear standards on human rights protection and ensure their implementation, particularly during the election period when politically-motivated killings could increase.” said Donna Guest.

Akbayan condemns in the strongest possible terms the dastardly crimes of massacre, murder, rape, and kidnapping in Maguindanao in the run-up to the coming 2010 elections in the province even as it calls on the national government to act with dispatch to head off the clan feuds or ridos in central Mindanao.

“We are aghast that such actions, committed in broad daylight with plenty of witnesses and under the very nose of the military, can happen. We condole with the families of the victims and are one with them in seeking justice,” said Rep. Walden Bello.

On Monday, some 35 supporters of Toto Mangudadatu, vice mayor of Buluan and member of a well-known political clan in Maguindanao, along with some observers, were waylaid, beheaded, and taken hostage while on their way to the provincial capitol in Shariff Aguak to file certificates of candidacy for the province’s top post. Media reports point to a son of the incumbent governor, Andal Ampatuan, as the leader of the group that ambushed the convoy of the Mangudadatus, composed mostly of women, including the wife of the vice mayor. Most of the women were not only murdered but also raped. Moreover, 13 of the victims were members of the press.

“Dapat linawin ng military kung bakit nangyari ang mga nangyari,” added Bello. “Such violence was foreseeable in a hotspot like Maguindanao. All indications were that it was inevitable if nothing was done to prevent it.”

Ridos or violent clan conflicts are a common occurrence in Muslim Mindanao. The ridos have become violent as loose firearms proliferate and clans occupying government positions are usually armed by the military through deputized militias and citizens Armed Force Geographical Units (CAFGUS) apart from the local police they control.

“We also take President Gloria Mascapagal-Arroyo to task on this issue. Her office exercises oversight functions on provincial governments. More important, Malacanang’s coddling of Governor Ampatuan as a political ally has contributed to the culture of impunity surrounding his rule,” said Bello.

“Akbayan calls on the national government to act decisively on this horrific crime while refraining from acts that will either aggravate the situation or prove ineffective. The clans must be disarmed, but the government must realize that pouring in more troops won’t resolve the issue. Akabayan calls for a political summit of influential Muslim Mindanao leaders to be brokered by independent third party mediators like the academe and media as well as some Church personalities to discuss the matter of political violence and measures to stop it,” Bello concluded.

Akbayan and other supporters, gathering at Amoranto Stadium on Tuesday Night, reiterate this call at a candle-lighting ceremony to honor the memory of those who were brutally killed, and in solidarity with the love ones they left behind. ###

Partido Lakas ng Masa (PLM) condemns in the strongest possible terms the massacre in Maguindanao. We assert that this is not only a problem confined to Mindanao, but that it’s a symptom of a festering and rotten political system. We predict that this violence will be the feature of the coming elections, as the political elite struggle with increasing desperation and ferocity for a share of the ever-dwindling national wealth and power.

The Philippine elections are veritable killing fields and the killings have begun!

We agree that the protection provided to the leaders of the Ampatuan clan by the GMA regime has granted them political immunity, to act with impunity as they will. However, the political impunity of the families and clans that control the political establishment is a permanent feature of politics in this country. It’s the mark of trapo politics (trapo means traditional politician; literally it means rug in Filipino). And lest we forget, it was the Ampatuan clan that guaranteed Gloria Macapagal Arroyo’s theft of the presidency.

The massacre happened because the rival Mangudadatu political clan was contesting the seat of power of the Ampatuans and were on their way to file their candidacy. In these clan wars, it’s the poor who are always the victims as they sacrifice themselves at the altar of trapo politics and for the interest of rotten trapo politicians. The Maguindanao massacre exposes the sham of the political system and the electoral process in this country.