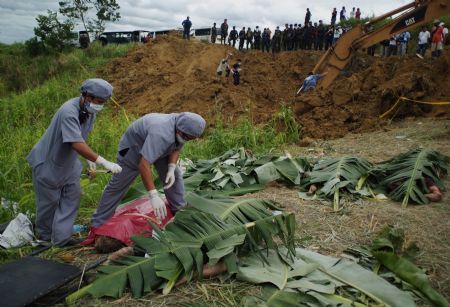 CONDEMNING even in the strongest possible terms yesterday’s slaughter of unarmed civilians in Maguindanao would not be enough as it was so gruesome and perpetrated by no less than the camp of a government official closely linked to Malacañang, and thus the masterminds and culprits must be meted out with the harshest possible punishment.

The Alliance of Progressive Labor aired this demand as the authorities have already dug up in shallow graves more than 20 bullet-riddled bodies, including at least 13 media people, a number of whom are personally known and considered as friends by APL-Mindanao.

Aside from the brutality committed, the carnage – after the euphoria and pride brought by Pacquiao’s boxing victory – has again shot the country into notoriety. The Reporters Without Borders as well as other international and local media groups have admitted that it could be the world’s “largest casualty of journalists in any one incident” and a “dark day for press freedom.”

The death toll is expected to rise as there were still many missing from about 50 people, including over 30 journalists, that accompanied the wife of Ishmael Mangudadatu, vice mayor of Buluan town, who was supposed to file in the Commissions on Elections office in Shariff Aguak town her husband’s certificate of candidacy for governor of the Maguindanao province in next year’s polls.

As of press time, 14 of the confirmed killed were women, and a number of them appeared to have been raped also. In fact, women comprised more than half of the group as aside from several female journalists, Genalyn Mangudadatu, wife of the vice mayor, had likewise brought with her some 20 women supporters. They had no security escorts at all.

Ms Mangudadatu’s convoy left Buluan at 9 a.m. and was reportedly blocked by armed men 50 kilometers away, at the boundary of the towns of Shariff Aguak and Ampatuan. She was still able to call the vice mayor and described their predicament and identified some of those who waylaid them. That would be the last time that the vice mayor would hear his wife’s voice.

Investigators revealed that all of the victims were shot at close range.

The Amapatuans are very close allies of Gloria Macapagal-Arroyo, and have delivered for Arroyo tremendous amounts of votes during the highly anomalous 2004 presidential elections, in which in one town all her rivals amazingly did not get even one vote.

Leaders of major labor formations in the country today joined the entire country and the world in condemning the massacre in Maguindanao last Nov. 23 that claimed the lives of at least 57 people (according to the latest news it is now 64), including 18 journalists and two government employees who were also union members..

he labor leaders, who belong to a new coalition called KONTRA WTO, demanded that the search for justice must not stop at arresting and jailing all the perpetrators and their mastermind, but must go hand in hand with determined efforts to dismantle the very social structures that breed violence and poverty in this country.

The Maguindanao massacre is a grim reminder of how deadly elite intramurals can be, especially when such feud involves political warlords. So long as there are political warlords who are in command of the “3 Gs” – guns, goons and gold – there will always be other massacres to come.

The labor leaders also reiterated that there must be an end not only to warlordism but also to inequitable structures that nurture and prop them up, adding that these social structures – capitalism and patriarchy, for example – are no less violent as the Ampatuans that thrive on them. In fact, they are deadlier.

KONTRA WTO stated that millions of Filipino workers continue to toil in desperation due to long-term unemployment and underemployment in the country. The jobs here are mostly contractual that are devoid of security of tenure and benefits and with very low wages, it added.

Many are pushed to find jobs abroad, only to find that they are victimized by illegal recruiters, KONTRA WTO said.

It added that women are the hardest hit as many of them are relegated to jobs that are dirty, demeaning and dangerous, and they usually earn less than men, and some even end up in prostitution and sexual trafficking.

These problems resulted from the flawed market-oriented policies that the ruling elites have pursued for more than three decades now. The increasing poverty and hunger and the worsening violence against women in the country are testaments to the dismal failure of this economic model, KONTRA WTO explained.

But rather than admit failure, market fanatics who control the country’s economic policies are hell bent on pursing more “free trade” as the solution for, rather than cause of, the current economic mess. Worse, their market-oriented “solutions”, like “carbon trading”, have dominated debate on how to solve climate change. Rather than cut carbon emissions, these false solutions have only succeeded in providing rich countries more rights to pollute our planet.

If the economic structures consign the majority of our workers to poverty, the political structures trap them in a situation of powerlessness. Thus, to keep their hold on power, the ruling elites are corrupting the electoral system. Money-politics have rendered elections in this country almost meaningless.

Warlords, like the Ampatuans, thrive in a situation where there is poverty and powerlessness, their brazenness intensified by the climate of impunity created by the Arroyo regime when it unleashed total war against political dissent.

KONTRA WTO believes that it is high time for Filipinos, especially the organized labor, to push forward for more transformative policies.

These issues will be highlighted by KONTRA WTO during their march to Mendiola on Nov. 30 to coincide with the 146th birth anniversary of Andres Bonifacio, the Filipino working class hero, as well as the start of the WTO’s 7th Ministerial Meeting in Geneva.

KONTRA WTO is a labor-led multisectoral coalition calling for the “sinking or shrinking” of the World Trade Organization and for the country to abandon its decades-old adherence to failed market-oriented policies.