http://www.anti-omc2009.org/?lang=en) as part of a week of action and debate around the WTO Ministerial which runs from 30th November to 2nd December(see

This afternoon clashes broke out as parts of the crowd attacked property smashing windows of banks and shops and setting a number of cars on fire. Police used tear gas, concussion greandes and water cannon. Further protests are scheduled with the WTO meeting starting on Monday 30th November, ten years exactly since the famous Seattle WTO protests. 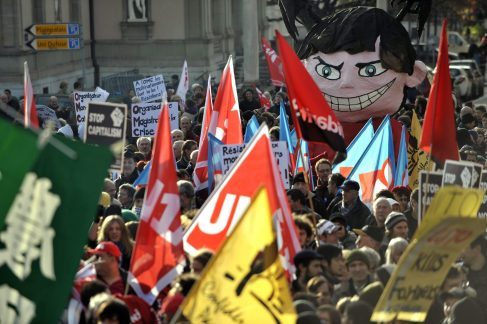 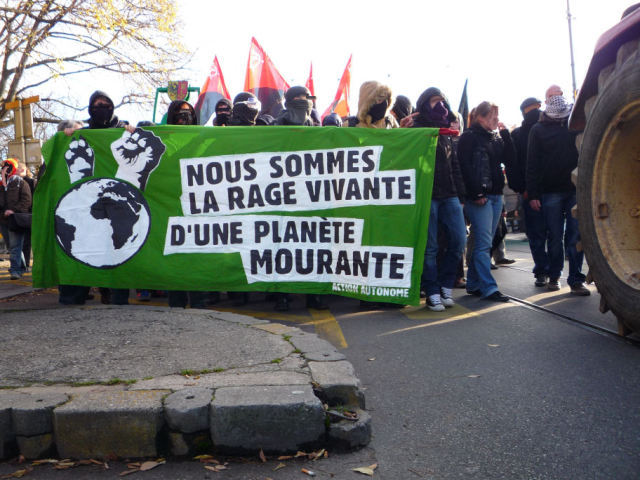 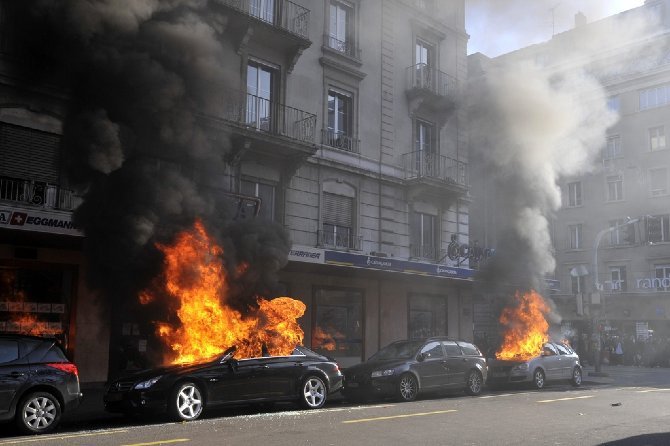 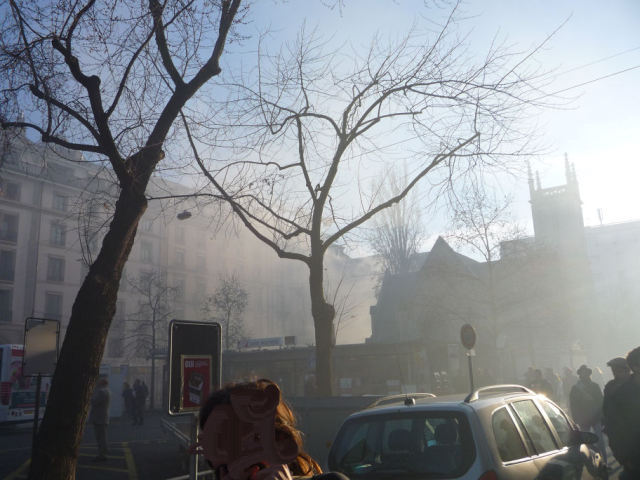 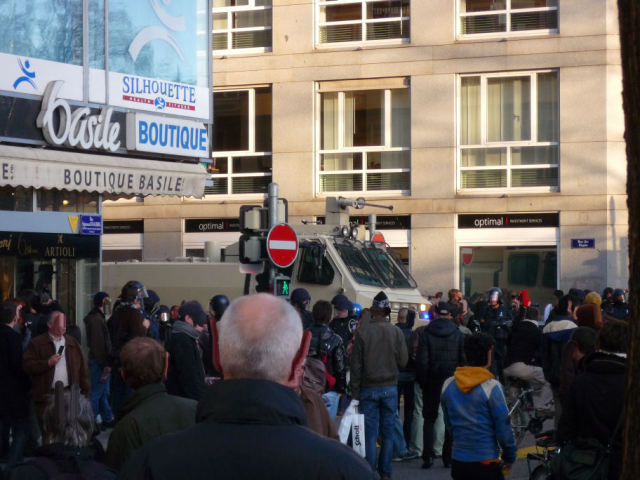 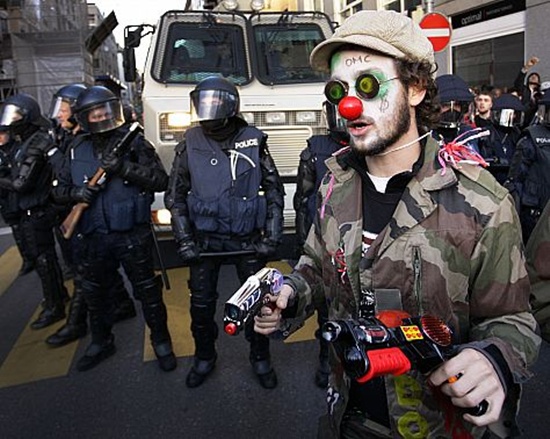 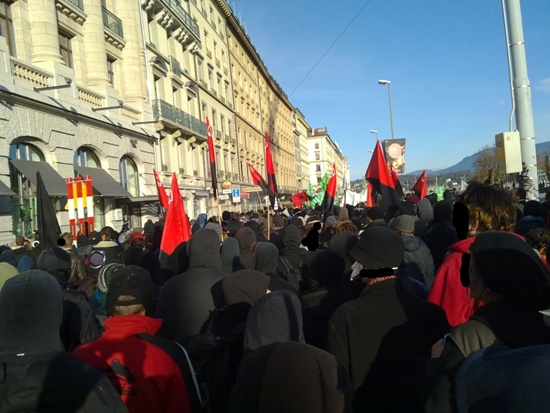 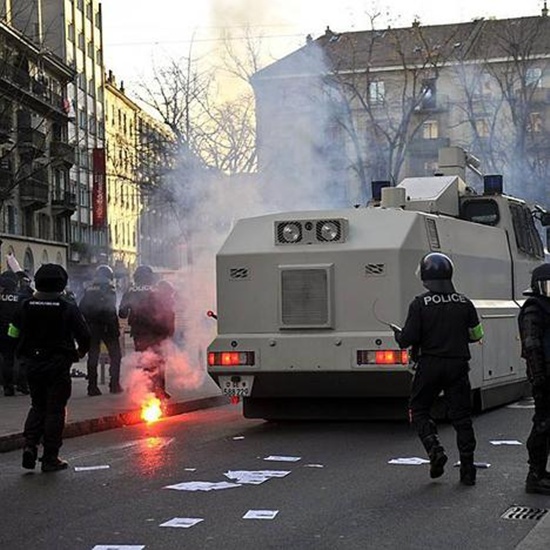 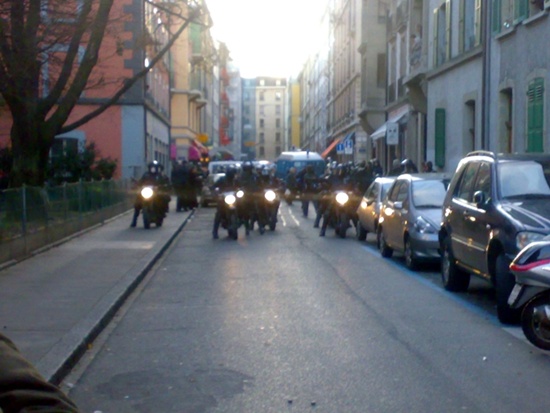 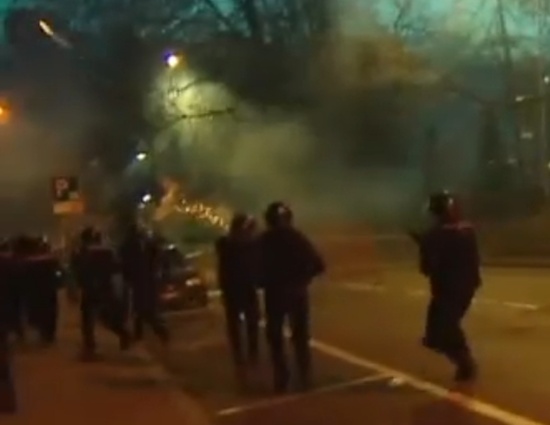 Pics taken from this displayed in article.

From 30th November through 2nd December, a WTO ministerial conference will be held in Geneva, a week before the climate summit in Copenhagen. Concerning both trade and the climate, policies that have been pursued in the past have failed catastrophically. Yet our leaders have not questioned them!

Thirty years of neoliberal globalisation policies and fifteen years of the WTO have done nothing but increase poverty in the South and inequality, unemployment and job instability in the North. In the end, these policies have plunged us into the worst capitalist crisis since 1929. The WTO promises to get us out of it… by beating the same drum: “liberalise” trade. This would benefit no one except transnational capital; it would impose fierce competition that would further accentuate pressure on jobs, working conditions, social security and public services.

Trade versus the environment

Those same policies have also had disastrous consequences on the climate. They have bankrupted millions of small farmers by promoting industrialised agriculture, even though the latter – highly dependent upon fossil fuels – is a major source of greenhouse gases. They have caused disastrous deforestation in the largest rainforests, the planet’s lungs and the habitat of indigenous communities. They have created a globalised production network with high energy-consuming means of transportation, simply in order to exploit labour to the highest degree. Unfortunately, in Copenhagen the players will be the same, and the same interests and false “market solutions” will be on the agenda, though their failure is patently obvious. Twelve years after Kyoto, the CO2 emissions of developed countries have risen to higher levels than ever before.

Tempted by the Titanic?

Neither the socioeconomic crisis nor the environmental crisis will be resolved by the same logic that created them. The current economic system has brought about poverty, inequalities and wars; it has thrust us into the worst crisis since World War II. Today we are confronted with the ever more pressing need to give up on the absurd idea of infinite growth on a finite planet. But our leaders, whether in thrall to the well-to-do or debilitated by tunnel vision, are not looking for a way out. For the sake of our children and grandchildren, the interests of society and the environment must trump blind profit. We can live well – and actually live better – if we do away with the unsustainable waste of a system in which the pursuit of profit forces us to either seek unlimited growth or go bust trying.

Hundreds of representatives of grassroots movements from all over the world will be in Geneva and then in Copenhagen to demand a radical change of direction. Let’s all meet in Geneva and…

Mobilise against the WTO, because building a better world is an urgent issue! Demonstration: Place Neuve, Saturday 28th November, 2p.m.

Other action will be taken during the summit.

Geneva mobilisation : where is the real violence? La Via Campesina

Via Campesina was present with an important delegation at the protest of Saturday 28 November against the World Trade Organization (WTO). The mobilization was strong with around 5000 people in the streets of Geneva. The objective of these people, as well as that of Via Campesina, was to demonstrate in a non-violent manner, but with a strong and radical message regarding the WTO.

Because of the dramatic consequences of liberalization on peasant agriculture around the world, we ask that the WTO get out of agriculture. We regret that material violence did not allow us to express this message in front of the WTO building in Geneva. Without minimizing yesterday's events, we remark nonetheless that another form of violence - social, political and economic - is directed on a daily basis towards a large part of the world population, including farmers. Let us not forget that one billion people do not have access to sufficient food. That violent political decisions criminalize certain unions on a daily basis: this was the case for our three Korean delegates who were not able to join us for the various mobilizations and who have been detained at the airport since Friday November 27th, 11 pm.

Our delegates traveled several thousand kilometers to come testify here in Geneva and propose alternatives. Since they were not able to do this during the demonstration, we invite journalists to take advantage of their presence in the coming days.

Complementary position of Uniterre on the Swiss aspects of the demonstration of 28 November:

* We wonder whether it is opportune to welcome international organizations of this scale if the only response to yesterday’s violent incidents is – for some people – the plain and simple prohibition to protest. This could lead to the impression that the authorities are not capable of dealing with events of this size while at the same time letting democracy express itself.
* We are also surprised that the Swiss authorities were able to obtain the names of three Korean delegates and detain them before a demonstration but that they are not able to identify 200 possible “rioters".