On Saturday morning (28-11-2009), I saw something so stunningly simple, and yet so effective and epic in it's scale as a work of activism that it blew my mind. 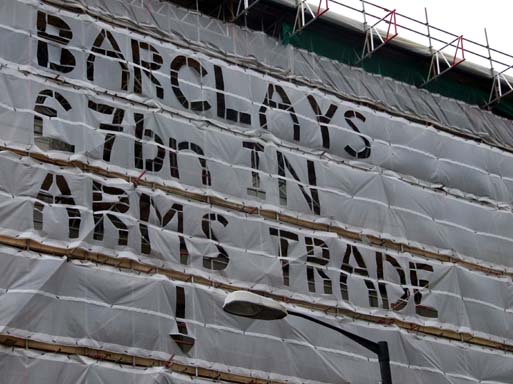 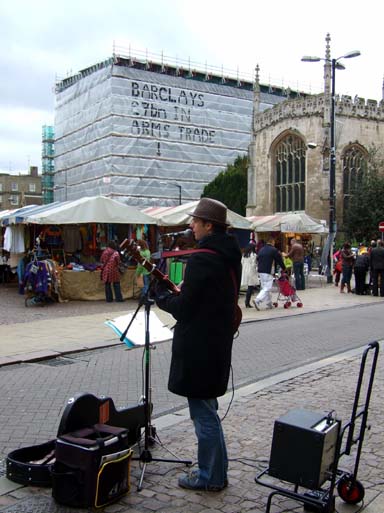 They sang 'Hallelujah'. Shame it wasn't for activism. 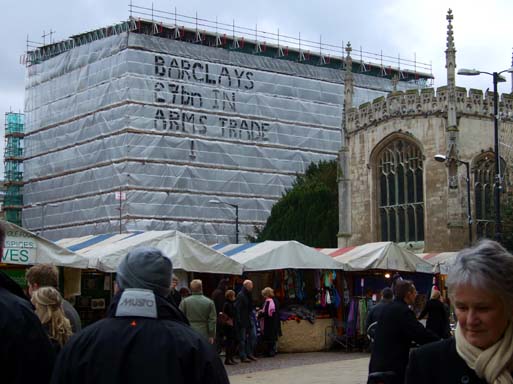 In The Market for a message!

Someone had gone to the Market Square in Cambridge, climbed the scaffolding surrounding the Barclays Bank there and cut out several holes in the plastic wrapping surrounding it that were about seven foot high. Except these were no ordinary holes, as these holes told the truth about the bank in a very simple and direct way.

As meme warfare goes, it is extremely successful, as even for the few minutes I was there, several people as well as myself were taking pictures, commenting on it and talking about this magnificent piece of artivism. One person I spoke to said they were going to send a cameraphone picture of it to London, meaning it's message is going to spread far and wide.

And the simple truth these holes cut out of plastic spoke..?

These are just seven billion of the many reasons I shall never have an account with any of the so-called 'big five'. These institutions are so morally corrupt (nay, bankrupt) that they actually don't seem to care what the person on the street thinks of them, unless it's written out like this - in a thirty foot high arrangement of letters for everyone to see.

The truth is always worth telling, whatever heights you have to scale to tell it.