PETA Classified as a “Terrorist Threat” by the USDA

People for the Ethical Treatment of Animals has been classified as as a “terrorist threat” in a document created by the U.S. Department of Agriculture.

The USDA created a new “APHIS Facility Security Profile” form [see PDF] to send to animal experimentation facilities. Recipients were asked to answer about their experiences, and return the form to the government so the USDA can better meet their needs 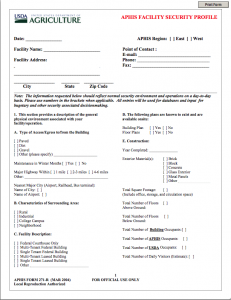 In one section of the form, on p4, item #2 B and C, PETA is listed as a “domestic special interest terrorist”:

B. Terrorist Threat. What terrorist activities have occurred in or around your building/facility in the past 5 years (documented cases)? Please check all that apply.

I have written extensively on this site about how the ELF and ALF have become the number one domestic terrorism threat, even though they have targeted property and not people. [1] And Stop Huntingdon Animal Cruelty activists were convicted on “terrorism” charges for running a website that vocally supported the actions of those groups. [2] The listing of PETA and the Animal Defense League is something else entirely.

PETA is perhaps the most recognized organization in the animal rights movement. They are known for their undercover investigations, and their use of celebrities and outlandish media stunts to draw attention to factory farming, fur, circuses and animal experimentation.

Regardless of how you feel about PETA and their tactics, they are a lawful, above-ground, national non-profit.

So why in another section of the USDA form, are they listed as a possible answer under “Greatest Threat or Danger. What do you consider the greatest source of danger to your organization and/or fellow workers?”

Because they expose what goes on behind closed doors.

Justin Goodman, research associate supervisor for PETA, had a fantastic oped in The Sacramento Bee about the Animal Enterprise Terrorism Act and the misuses of the “terrorism” label against non-violent activists. [3] In California, four activists are facing terrorism charges for protesting at individuals homes and allegedly creating fliers with names and addresses on them.

This should give all Americans pause. People who engage in nonviolent protests and civil disobedience are sitting in jail cells, stigmatized by one of the most politically charged and discrediting labels of our time, while people who wake up every morning and go to jobs in which they torment and kill animals in laboratories continue to enjoy their freedom, paychecks, social lives and families.

Animal industries are quite open about their desire to use terrorism laws to keep their practices out of the public spotlight. I recently posted about the Animal Agriculture Alliance calling for federal prosecution of undercover investigators. [4] It’s not because the investigators are violent. It is because they pose an even greater threat: educating the public.

As Goodman wrote: “To shield them from public opinion and discussion and to protect them from peaceful and heretofore lawful pickets by locking up those who dare to challenge the suffering that occurs inside laboratories is an attack on every American’s right of protest.”

Green Is The New Red