To defend the right of social protest!

* From Venezuela, a group of social organizations and human rights, students and academic groups as well as different individuals, launch this call for a campaign to defend the right to protest, which today is being systematically violated by the government of Hugo Chávez. This document was originally published in Spanish in El Libertario newspaper, # 57 (www.nodo50.org/ellibertario). 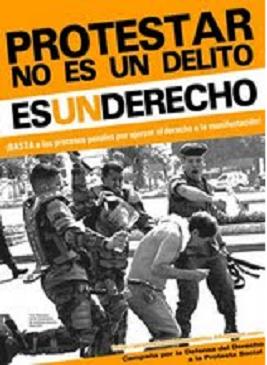 According to figures revealed by trade unions, peasants and student leaders, there are currently 2200 people in Venezuela under schemes of presentation in court for exercising the constitutional right to protest for their basic demands. The vast majority of people suffering from these processes belong to workers unions, peasants, students and people communities, being the most dispossessed and vulnerable the ones who suffer the infringement of their rights. What was an isolated and eventual policy has become a state policy. On the one hand, police officers, the prosecutors and judges, on the other, hired killers led by landowners and business sectors, plus shock troops allied with national, regional and local governments regardless their political orientation, all form the triangle of repression to the social fight.

Such criminalization, encouraged by different branches of the government, businessmen and landowners, is made in a context of rising demonstrations for social rights so the government has been applying several regulations to those who occupy lands to demand their right to land and housing, to communities that close the streets to seek or improve public services, the workers that pressure to defend their source of work, achieve better wages and achieve collective hiring, to students demanding resources for their schools, users of primary health services and several other sectors in struggle for their social and political rights. Therefore, the above is an evidence of the strategy applied by the state and some private sectors to restrict legitimate protest and the enjoyment of human rights enshrined in the Constitution.

As a counterpart we have the situation of impunity for crimes occurred against social fighters, where the signs of participation of businessmen and landowners in the assassinations of workers’ leaders and peasants have not been investigated and punished at all, and neither the political responsibility of regional leaders in some of the cases. This impunity has encouraged the hired killers as a method to silence and intimidate the sectors in struggle for their rights. While in this mode there is a high percentage derived from the feuds between trade associations for the control of jobs, as happens in the construction sector, there have been several cases where the contract killing aims to fulminate and dissolve unions who dare to move for their claims and the more radical workers' struggles.

For this reason a group of social organizations and human rights, student and academics groups as well as different individuals, promote a campaign to defend the right to protest, as lies in the universal declaration of human rights and the Constitution, and condemn the opening of trials, the use of hired killers and other mechanisms against this right such as legal measures that ban the execution of assemblies and strikes within SOEs. In this regard, we want to make the present statement to raise public awareness about this serious restriction of the rights, and urge all unions, peasants, community and students organizations, as well as the alternative media to join actively this national campaign to defend the legitimate right to social protest.

1) The repeal of sections 284, 286, 297 and 358 of the Penal Code; 47, 48, 49, 50, 53 and 56 of the Organic Law of the Nation Security and Defense, 139 and 141 of the Law for the protection of individuals with access to goods and services, as well as 20, 24 and 25 of the Special Law of popular Defense against hoarding, the boycott and any other conduct that affects the consumption of food or products subject to price controls; all of which penalize the right to protest.

2) The unbiased and clear investigation of all crimes of hired killers and other crimes against peasants, workers and other social actors as well as the prosecution and punishment for the offenders.

3) The full and immediate freedom for all the social activists in detention for protesting, the suspension of the scheme of regular reporting to the courts and other measures prohibiting union work in the working centres.

4) No use of the security forces against demonstrations for social and political rights. Banning the use of firearms and tear gas by police and military during protests, and when they execute eviction proceedings against actions demanding the right to housing and public services.

More info in the blog

http://protestarnoesundelito.blogspot.com (in Spanish), and in

http://www.nodo50.org/ellibertario (in Spanish, English & other languages).