The neo-Nazi EDL have announced on their website they are to hold a violent racist gathering in Stoke on Saturday the 23rd of January 2010. 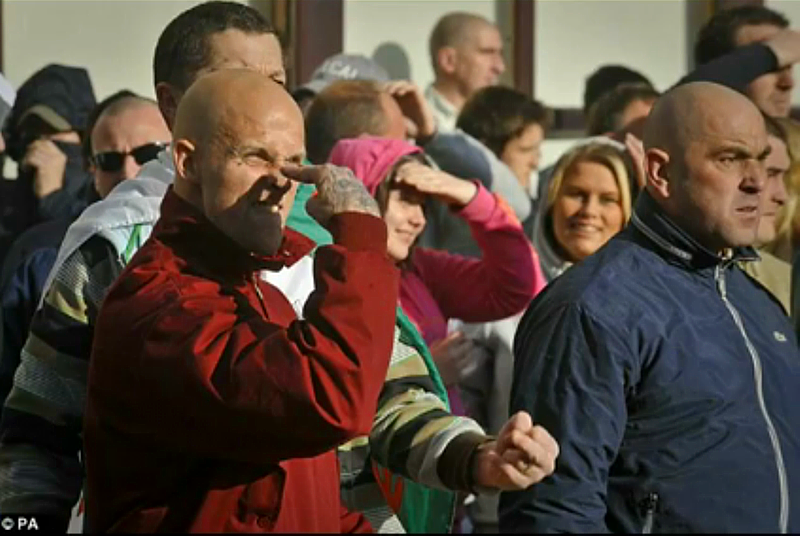 With a sizeable number of far right representatives on the council from the BNP, despite all claims to the contrary, by bringing their violent football hooligan bandwagon to Stoke, their idea is to forment rioting and conflict which the fascists are hoping will be blamed on minorities, increasing support for the BNP future elections, a tactic used by the national front nine years ago when they helped ignite racial tension in the Midlands and the North, paving the way for the BNP to progress in the ballot box.

The neo-Nazi EDL have announced on their website they are to hold a racist gathering in Stoke on Saturday the 23rd of January 2010. With a sizeable number of far right representatives on the council from the BNP, despite all claims to the contrary, by bringing their violent football hooligan bandwagon to Stoke, their idea is to forment rioting and conflict which the fascists are hoping will be blamed on minorities, increasing support for the BNP future elections, a tactic used by the national front nine years ago when they helped ignite racial tension in the Midlands and the North, paving the way for the BNP to progress in the ballot box.

Everywhere they meet, the EDL (WDL & SDL) always claim they are simply "protesting against Islamic extremism", and their army of trolls led by Trevor Kelway have conducted a major propaganda assault on online newspaper forums, posting reams of lies, contortions and misinformation centred around the rights of free speech, while playing down the obvious unpleasant facts about the organisation - the 90% plus of racist football hooligans in the EDL, it's strong but denied links to the BNP, and the many captured photos and filmreels of Hitler salutes, violence and hardcore racism.

Most damning of all, in a recent visit to Wales, EDL came out in their true colours, forty EDL Bolton Wanderers hooligans making massed Hitler salutes, capped with the theft and burning of an ANTI-nazi flag, behaving just like old-fashioned Combat18. Despite numerous photographic evidence, the neo-Nazi denied everything, just as they always do, giving hollow promises to stop their members saluting Adolf at future events.

With big-money millionaire European islamophobic backers supporting the EDL, there is plenty at stake for the racist orgnisation and its secretive aims, (whatever they may be), therefore the EDL acts like a corporation rather than a ragtag far right fighting gang in terms of PR and media spin, learning from the political subterfuge of New Labour in spinning a web of deceit and lies across the length and breadth of the internet.

However much Alan Lake and Trevor Kelway fret about the public perceiving the EDL as a neo-Nazi organisation, once their football hooligan footsoldiers are on the streets, after a dozen or so pints in fascist-friendly a JD Wetherspoons pub, the law of the jungle takes over, and their hardcore neo-nazis and dangerous soccer thugs very much please themselves, spitting at passers-by, making Hitler salutes, chanting racist slogans, throwing missiles at police and anti-racist demonstrators.

Whereas a bonafide commercial organisation can be held to account over its corporate responsibilities, like the BNP and the NF before it, the EDL time after time washes its hands of the criminal behaviour of its followers, via slick television interviews, incessant trolling, claiming time after time that the racism and extreme violence is the result of "infiltration" not just by other fascist grups but by leftwingers and anarchists, even though any anti-racist protestors of substance would much rather be run over by a ten-tonne lorry than pay homage to Adolf Hitler.

The BNP say the EDL are a state-controlled operation, and reciprocate the tokenistic "proscription" of their rival group, whilst key BNP members continue to be involved behind the scenes of the EDL. The EDL website was designed by a BNP man Chris Renton, and their website links to fake BNP charty for war veterans, Nick Griffin fundraiser "Soldiers Off The Street"

http://www.soldiersoffthestreet.com/ and plenty of experienced BNP personnel are giving them advice behind the scenes, but in public, the cherade of not linking each other continues for PR purposes.

Before the EDL visit, the BNP councillors on Stoke Council will be vying for point-scoring by speaking out against the EDL, showing just how hypocritical the BNP are, painting themselves as the good guys, and likewise the EDL will keep on reminding you via newspaper trolls that they are nothing like the BNP, as the war of propaganda reaches epic proportions.

One of the greatest lies of the EDL is that they are multiracial and antiracist, giving the impression not only that they might not be nazi, but they are an all-inclusive discussion group working with communities to tackle Islamic extremism. Alas! When the EDL's finest racist soccer hooligans leave Wetherspoons, the footsoldiers idea of speaking out against Islamic extremism is to scream and shout vile obsenity and insult against Allah and calls for all Muslims to leave the UK. As for being multi-ethnic, a handful of uncle toms reported to be five or six non-white heritage EDL members fails to lend any crediblity to this ridiculous lie. No matter how many times Trevor Kelway posts under a flurry of non-de-plumes, the sickening truth about the actual neo-Nazi nature of the EDL is plain for all to see.

Check YouTube, press photographs, blogs and EDL facebook accounts to get the true picture. Notice the extreme racism of official EDL members and organisers, and open support for Combat18, the NF and the BNP on Facebook walls, and hate remarks so sickening and extreme against Muslims, black and Asian people. Only a fool after reading all this could continue to believe that the EDL are not a violent racist,fascist organisation.

And yet the keyboard warriors from the EDL's misinformation department continue to plague not only local newspaper comments pages, the Telegraph and the Daily Mail, but Indymedia itself. Recent articles about the EDL's assault on Nottingham have been bombarded by comment after comment distorting facts and distracting threads from being critical of the EDL, inacting lies and distortions that Goebels' would have been proud of. Indymedia adminsitrators need to be aware of the tactics used by troll-in chief Trevor Kelway and chums, and to act accordingly, neutralising any infiltration of both straightforward EDl support and cryptic undermining of anti-fascist moral authority. Pitting anarchists against socialists is a regular ploy, pretending to be one or the other to destroy Indymedia through in-fighting.

Antifascists and antiracists, anarchists and liberals of must remain united against the EDL, and refuse to allow Stoke to become the national home of ignorance and race hate in a dignified and steadfast manner, informing people what the EDL are really about. Black, white, young, old, Easterm European, traveller, gay and lesbian, Christian, Muslim, Hindu, Sikh, Jewish and Athiest, student, employed, unemployed, we are everybody and all, and despite the government's stubborn refusal to inact anti-race hatred laws to curtail this bandwagon of drunken soccer hooligans from wrecking communities under the premise of "protesting against Islamic extremism", we will send the EDL peacefully packing from our diverse and thriving city.