On Monday 14th of December, campaigners from the UK Tar Sands Network and Camp for Climate Action protested outside Canada House in London and shut down Pall Mall Street in Trafalgar Square to protest against Canada’s attempts to derail the climate change negotiations in Copenhagen. 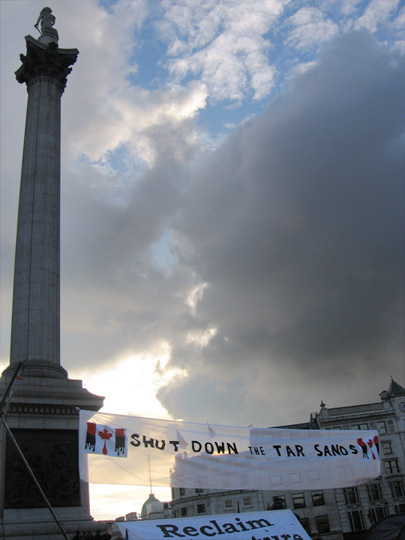 On Monday 14th of December, campaigners from the UK Tar Sands Network and Camp for Climate Action protested outside Canada House in London and shut down Pall Mall Street in Trafalgar Square to protest against Canada’s attempts to derail the climate change negotiations in Copenhagen.

Canada is one of the biggest current stumbling blocks to an ambitious and binding climate deal – because it continues extracting oil from the most destructive project on earth, the Tar Sands. [1] This protest will take place in solidarity with similar protests in Copenhagen itself and several Canadian cities.

The Tar Sands in Alberta, Canada, are one of the world’s most polluting projects and are having a devastating effect on the lives of Indigenous communities and fuelling global climate change. Currently in Copenhagen, Canada is proposing an inadequate target for reducing greenhouse emissions by only 3% by 2020 ignoring world scientists’ recommendations to commit to over 40% reductions below 1990 levels in order to avoid dangerous runaway climate change. As a result, international criticism of Canada is mounting. Last week, a group of 11 Members of the European Parliament called on the leaders of BP, Shell, Statoil and Total companies to halt production of oil from the tar sands. [2]

“Canada has already spectacularly failed to meet its Kyoto Protocol targets and has shown no signs of changing its priorities in Copenhagen. Instead of making the necessary shift to a low carbon economy, the Canadian government continues to approve new Tar Sands leases and is refusing to co-operate with international efforts to mitigate the impacts of climate change. This affects the whole world,” says Suzanne Dhaliwal of the UK Tar Sands Network, who will be at the London protest.

“The Canadian government continues to ignore its own laws, which state they must consult with Indigenous Peoples who have been trying to convey concerns about Tar Sands development. Tar Sands are killing our communities and trampling over our rights. Furthermore, the environmental destruction wreaked by the Tar Sands is directly threatening thousands of lives now and is driving our climate into chaos. The world has woken up to the fact that Canada is now Public Climate Enemy Number One. It’s time Canada did its global duty and shut down the Tar Sands,” says Clayton Thomas-Muller, an Indigenous activist with the Indigenous Environmental Network (IEN), who is participating in the parallel Tar Sands protest in Copenhagen.

UK campaigning against the Tar Sands, in solidarity with IEN, has focused on BP which plans to enter the Tar Sands through the massive ‘Sunrise Project’ and the Royal Bank of Scotland, now 84% state-owned, which has invested £8.3 billion in the Tar Sands since 2007 according to new research by the Rainforest Action Network.

The “Canada:Don’t Cop out on COP” action will start in Trafalgar Square, which has been occupied by the Camp for Climate Action [3] for the duration of the Copenhagen negotiations as a base for UK based solidarity actions. Campaigners will then move onto Canada House to deliver their message to the Canadian government.

[3] The Camp for Climate Action is a growing grass-roots movement of diverse people taking action on climate change.