“It looks like the smoking gun. This is smoking uranium.”

“Israel must decide within months on military strike.”


With the December 14th issue of ‘The Times’, the British media’s four-year-long propaganda campaign against Iran enters its final stage.

In fact, the tone and scope of this latest coverage is almost identical to those we were bombarded with in the months preceding the invasion of Iraq. 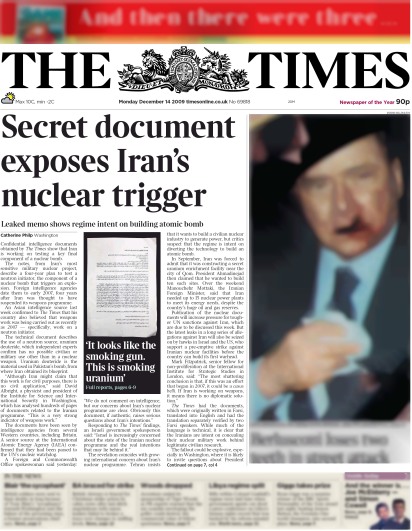 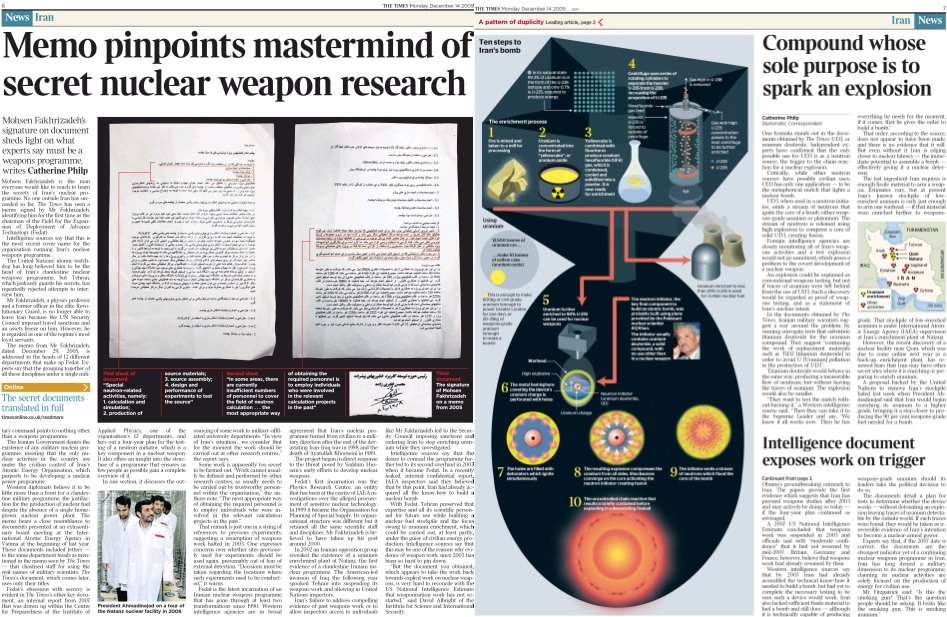 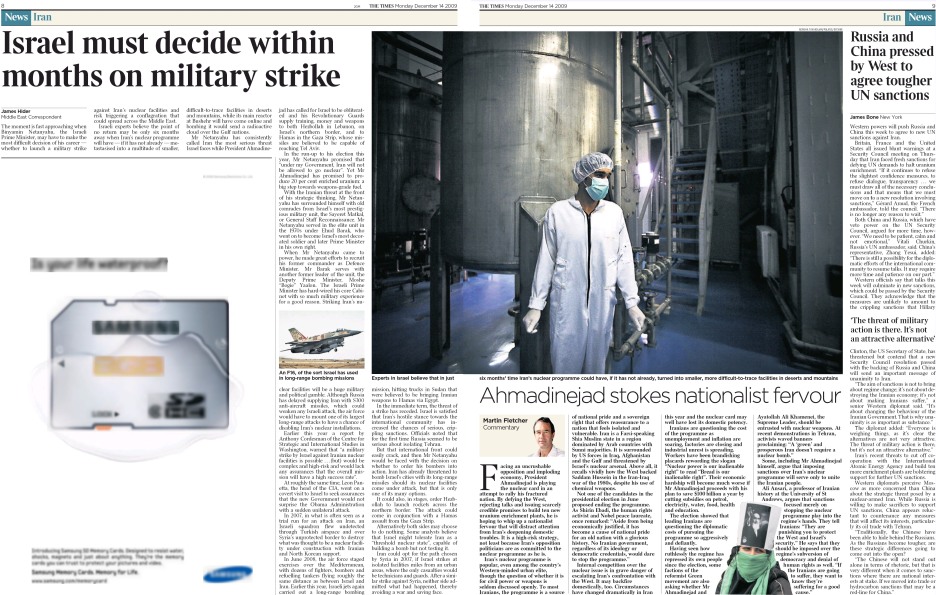 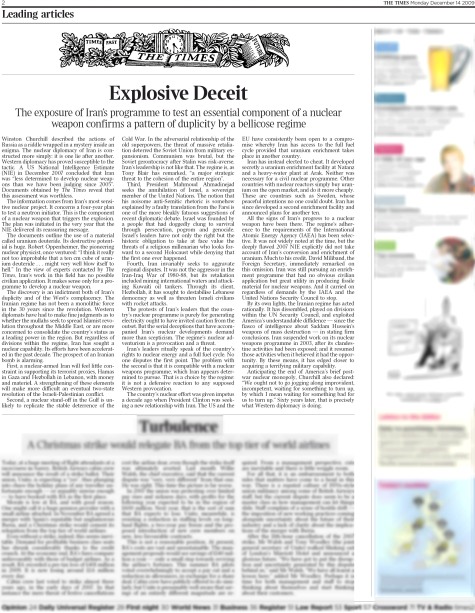 “It looks like the smoking gun. This is smoking uranium.”

“Israel must decide within months on military strike.”


With the December 14th issue of ‘The Times’, the British media’s four-year-long propaganda campaign against Iran enters its final stage.

In fact, the tone and scope of this latest coverage is almost identical to those we were bombarded with in the months preceding the invasion of Iraq.

the newspaper headline and news item "israel must decide within months on military strike" is the most hypocritical ever for obvious reasons and is highly offensive to me as a human being. is this is part of tony blairs "regime change" of countries with leaders he wants removed? who made tony and co world president? G8 = wrong, G20=wrong G192= correct all countries must have equal rights in world affairs, time for change.

is the document watermarked? Does it have any sort of seal of authenticity? No, if you look at the picture is just a plain document typed on plain paper received from secret sources. What a joke, the problem is people might believe this bullshit

... if israel or amerika decide to kill millions of Iranians for their own selfish purposes, then those connected with the production of this article[sic] will be equally guilty of mass murder.

... times running out for the times to apologise

Shouldn't that be AmeriKKKa?

source: “Iraq’s Weapons of Mass Destruction: The Assessment of the British Government”, 24 September 2002


Britain’s intelligence services say that Iran has been secretly designing a nuclear warhead “since late 2004 or early 2005”, an assessment that suggests Tehran has embarked on the final steps towards acquiring nuclear weapons capability.

(*) title of the print edition


“We are here to announce that yesterday in Vienna, the United States, the United Kingdom, and France presented detailed evidence to the IAEA demonstrating that the Islamic Republic of Iran has been building a covert uranium enrichment facility near Qom for several years. […]

Iran is breaking rules that all nations must follow -- endangering the global non-proliferation regime […] and threatening the stability and security of the region and the world.”


excerpt from: Remarks by the President on strengthening missile defense in Europe


“As I said during the [presidential] campaign, President Bush was right that Iran’s ballistic missile program poses a significant threat.”


excerpt from: Obama interview: the transcript


BBC: What the Israelis say is that they have managed to persuade you at least to concentrate on Iran and to give what, behind the scenes, they’re calling it a bit of an ultimatum to the Iranians: By the end of this year there must be some real progress.

OBAMA: Well, the only thing I’d correct on that is I don’t think the Israelis needed to convince me of that, since I’ve been talking about it for the last two years


excerpts from: Iraq and Weapons of Mass Destruction


“Today we published a 50-page dossier, detailing the history of Iraq's weapons of mass destruction programme, its breach of United Nations resolutions, and its attempts to rebuild that illegal programme. […]

The dossier is based on the work of the British Joint Intelligence Committee. […] The intelligence picture that they paint is one accumulated over the last four years. It is extensive, detailed and authoritative.

It concludes that Iraq has chemical and biological weapons, that Saddam has continued to produce them, that he has existing and active military plans for the use of chemical and biological weapons, which could be activated within 45 minutes, including against his own Shia population, and that he is actively trying to acquire nuclear weapons capability.”