Hardcore neo-Nazi EDL forum moderator, Wigan Mike has been arrested on terror offences. Real name Michael Heaton of Leigh, National Front and British Freedom Fighters member "Wigan Mike" has helped organise many EDL and WDL demos, and was photographed amongst the crowd of Hitler saluters during the WDL's recent visit to Wales. 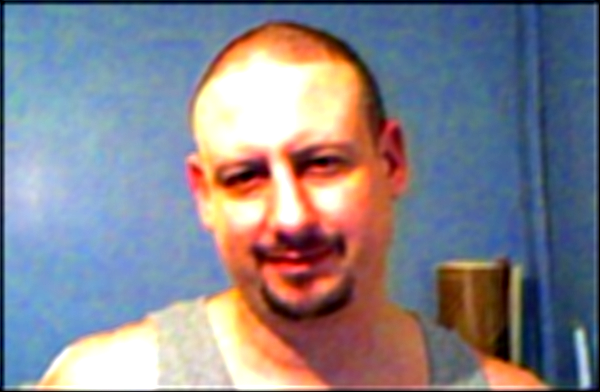 Wigan Mike is also charged with soliciting murder, which is a very serious criminal offence which if convicted, would result in a lengthy jail sentence, on-top of the terrorism charges.

Going under the moniker NSMIKE266 (NS meaning "national socialist i.e. confirmed Nazi)", although not a BNP member, Wigan Mike also attends BNP events, and was recently charged with racial harrassment this June in Blackpool after attending a BNP social piss-up at the New Kimberley Hotel, along with fash skinhead thug Liam Pinkham: -

Wigan Mike as a prominent member of the EDL, helping run the EDL's online racist football hooligan forums, has been spotted leading chants labelling all Muslims as terrorists at EDL marches in Manchester, Birmingham, Wrexham, and Leeds, and yet ironically has been charged with terrorist offences himself, which pays homage to the old adage when applied to terrorism, "it takes one to know one".

So much for the "moral high ground" of the EDL. When the proverbial shit hits the fan, we will know more about what exactly Wigan Mike was getting up to. Like it or not, the EDL is riddled with a significant number of renowned white supremacist extremists who the organisation has done nothing to contain. By allowing Wigan Mike to help rally his troops, incompetant EDL supremo Trevor Kelway has allowed his gang of loutish weak-bladdered soccer drunkards to succomb to the perils of hardcore white supremacism, becoming a welcome home to some of the most extreme lowlifes of the British far right scene, some of whom explicitely advocate white nationalist violence.

You can burn a swastika in public, and spin a fight between Chelsea and Spurs fans as an EDL versus C18 fight (which it clearly was not), and spend American Christian hard right fundamentalist cash on anti-terror publicity stunts outside mosques, however you cannot hide the sickening truth, the EDL's confirmed fascist credentials.

Pompous Pompey pantywaste Trevor KKKelway and chums forlornly troll the internet, telling the world that the EDL "are not nazis and white supremacists", but the sickening facts speak for themselves with prolific racist chanting, Hitler salutes, and now terrorism and murder plotting charges entering the public domain in a relentless flow of bad publicity for the hate-spewing soccer thug gang.

No matter how hard gormless racist dimwit KKKelway spins his pathetic web of lies, propaganda and bullshit, claiming to disassociate himself from Combat18 and the BFF, KKKelway's beloved EDL will be forever tarred with its neo-Nazi tag in indelible ink. Having half a dozen black and mixed race uncle toms, so not make the EDL any less racist. It must be remembered that when Mussolini came to power, he campaigned on nationalist rather than racist issues, and even relied on Jewish voters, only to betray them when his fascism took a racist slant, with Italy's participation in the Holocaust.

If igniting race riots is the main intention of the EDL not peaceful protest, just imagine what might happen if bombs were to go off in cities where the EDL were to gather, and were to be blamed on Islamic extremists. Don't put nothing past the warped minds of the British far right. MI5 and MI6 are on high alert for the possibilities of white supremacist terror

Many spectators on the "nationalist" scene of the far right on Stormfront VNN and Blood and Honour, view Wigan Mike as a grass. If I were Alan Lake, Trevor Kelway and the EDL, forget the drunken urge to piss in public. I'd be well and truly shitting my pants!!