As the UK financial meltdown has deepened, yet another symptom of discontent has broken through into the mainstream. A grassroots Facebook campaign to get the revolutionary song "Killing in the Name Of" to the corporately-coveted Xmas No 1 spot has succeded. 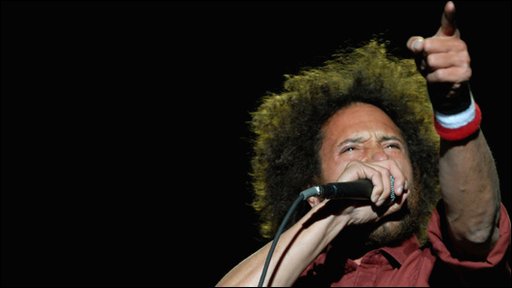 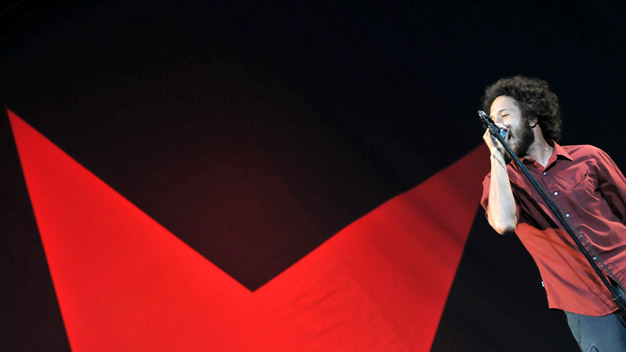 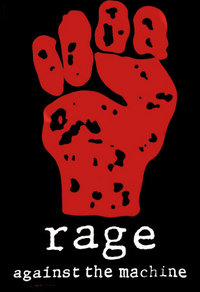 18 years after it's original release, the song was an unlikely candidate for the best selling Christmas song of 2009. It's lyrics rail against imperialism, mass media propaganda, the military industrial complex and those who benefit from it's violence against the world. As such there is a certain irony that the Sun newspaper who have backed numerous wars, and attacks on the poor formally backed the band and published quotes from Tom Morello asking people to stand up to "illegitimate authority". Whilst Simon Cowell has condemned those behind the Facebook campaign as being "Scrooge", they have successfully raised £50,000 for the homeless charity Shelter, and Rage Against the Machine intend to give profits from the sales away to a UK music charity which supports disadvantaged children.

As Rage Against the Machine are signed to Sony records, the very same label as the contending X Factor song, many have condemned the exercise as pointless and counterproductive as millionaire corporate executives and investors are benefiting significantly the campaign's success. But if these events prove anything, it is that capitalism is greedy enough to sell you the weapons to fight it.

Merry Xmas and a Happy New Fear, and Many Happy Revolutions..

I personally think no one will care in a couple of months from now.

What about Bob Dylan's "Must Be Santa" off the Christmas album?

What about Bob Dylan's "Must Be Santa" off the Christmas album?

What this shows is that the corporatized Internet new mass media is brainwashing the masses just as seamlessly as the old broadcast media. It is in fact the first seamlessly integrated act of cultural corporate-subverison carried out simultaneously in the new and old medias.

People are manipulated en mass even more effectively with social networking, data-mining, and other forms of quasi surveillance. The whole thing is a conspiracy by Sony's A&R people. It's all manufactured controversy to maximize sales and recuperate dissent. The British media is the best in the world at social control through cultural manipulation, and they know and are proud of it. In fact 90% of the activist types I've met are really just wannabe media wankers, no better than 14 year old kids wanting to be David Beckham. Because this is the kind of Society of the Spectacle we live in. Everyone has lost hope of change and just desperately wants to bullshit their way out of the anonymity of a pointless, wage-slave existence.........

The Facebook group was set up by Tracy, and Jon Morter, neither have politcal motivations for having Rage at Chritmas no. 1, for them it is solely about the music, this could be said for a lot of people who bought the track too. There are also a lot of people who bought the track because they wanted to see an anti-capitalist band and song at number 1. The arguments rage on the Facebook group page already between people who don't want to bring politics into the campaign (odd choice of band and song then!), and those who see the group as a vehicle for getting across a radical message, and for organising.

It is very off putting that the organisers Tracy and Jon are not interested in RATM's message, but see it as real music vs generic pop, and Jon is very weak in interviews, (maybe his wife Tracy would be more passionate?), he has rarely even mentioned Shelter in his interviews, let alone what Rage stand for, although, I suspect Tracy is the driving force behind the campaigns support of Shelter.

So what do we have, a nice little boxed in corporatised piece of "rebellion"? In some ways yes, in others no. aside from the obvious of people being exposed to RATM, and what they stand for (they played a big part in me becoming radicalised), we have interesting discussions on the group page; although, the groups admins were deleting posts about the war, and other issues in the run up has they deemed them "harmful to the campaign". In short the Facebook group is definately not going to be the driving force for real dissent.

However, RATM have promised to do a massive free gig next year, having seen RATM live, front man Zac is a very articulate passionate speaker, and will not hold back. Exposure on this scale to radical thinking surely can only be a good thing? And RATM will step outside of the box of "real music vs pop/RATM vs Cowell" and put very real issues out there.

In short, I am glad RATM are number 1, people are right to point out that it is recuperated plastic rebellion, but RATM have the potential to put across there very real anti-capitalist revolutionary ideas as a result, and no doubt will seize on this.

And that is a constant refrain on Indymedia: lack of radical engagement with communities. Putting Rage Against the Machine at Number One is trivial. It is trite. It is beneath the ideological purity of the activist. But it is, as Situations go, where the action is.

As much as this did make me smile it isn't really that big a political victory as some are claiming. It is nice to break the hegemony of consumer orientated manufacured culture but tat the end of the day we are rebelling in the way that a good little consumer would.

anyone heard the rage song "no shelter?"

Do you think this is why they are donating to shelter? :P

to be fair you are defiantly qualify for the anti-capitalist and revolutionary label if your signed to Sony! (maybe not)

its ashame the same people that put all the effort into persuading to buy a product didnt put that same energy into activism. but i suppose all consumerists can do is to consume.

i love the band and some of what they have done. the victory is great on on face value, but i wouldnt read any further into it than that.

come on you grumpy gits

fair enough, buy the record have your say. but we need more than that now, we need total revolution by any means! a band on sony are not anti-capitalist! the lyrics are, that dont mean the band are.......come on people. sony is one of the majors, of which there are only a few, why would any self-respecting anti-capitalist be signed to them? .......hardly anti-capitalist, is it? but still, respect to them, they have a chance to say something to young and old, a chance i dont have at the moment, so good fucking luck to them! viva la revolucion!