An open letter to Heckler & Koch

The first protest against Nottingham-based arms company Heckler & Koch took place in May 2000, but it wasn’t until May 2008 that another demonstration launched the Shut Down H&K campaign, which has been running ever since.

18 months in, the campaign has decided that it’s about time to speak to Heckler & Koch. So, the campaign has written H&K a letter summarising the people’s concerns and asking the company to come clean about its dirty business… 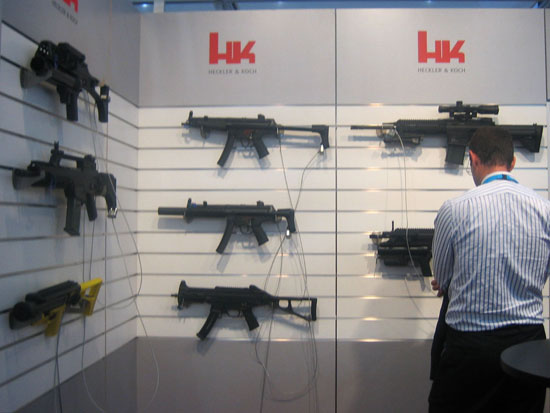 We are sure you must be aware of our campaign, Shut Down H&K. We are a group of Nottingham residents, students and anti-arms-trade campaigners who are concerned about the role of Heckler & Koch in the international arms trade.

We hope that you can appreciate that our campaign has arisen out of a genuine concern about the consequences of your trade. We are writing to request information about the recent operations of Heckler & Koch, and to ask you to address our concerns.

We are aware that:

1. Heckler & Koch weapons have been sold to many countries whose armed forces are well known to have committed serious and widespread violations of human rights in recent years, including the Philippines, Thailand and Saudi Arabia.

2. The British National Archives show how Heckler & Koch has used the UK to manufacture and sell weapons to countries such as Nigeria and Kenya when such sales were restricted by the German government.

3. Heckler & Koch has licensed manufacturers in countries such as Turkey and Pakistan to produce H&K-designed weapons. Through these arrangements, H&K has profited from sales to countries engaged in armed conflict including Indonesia and Sri Lanka during periods when direct sales to these countries were prohibited by the EU or by the governments of Germany and the UK.

4. In recent years, the security forces of Nepal, Lebanon and Georgia have been armed with Heckler & Koch G36 assault rifles after the German government had denied export licenses for those transfers amid concerns about armed conflict and human rights violations.

5. Heckler & Koch weapons have fallen into the hands of child soldiers in Africa, terrorists in the Middle East, militias in Darfur, rebels in Nigeria, arms traffickers in the Philippines, mercenaries in Iraq and organised criminals in Serbia. Heckler & Koch weapons have been used by armed forces in conflicts in which those forces have been accused by international monitors of war crimes, including Bosnia in 1991, South Ossetia in 2008 and Sri Lanka in 2009.

With H&K continuing to advertise its weapons on the international market, we would like to make sure that the company is no longer directly or indirectly supplying weapons to regimes guilty of human rights violations, war crimes or crimes against humanity. In order to ascertain this we would like to know about the business activities of the H&K Group during the period of time since its change of ownership in 2002 (hereafter referred to as the Period).

As the office responsible for “international customer sales and customer services” for non-NATO countries (according to the H&K Group website) we trust that you have the relevant information. By making this information available you would be addressing the growing concerns about Heckler & Koch, and demonstrating that the company has nothing to hide.

3. We would like to see details of any contracts that have been in effect during the Period whereby a third party was licensed to manufacture products for which the H&K Group owned the designs.

4. We would like to know the full extent of the H&K Group’s involvement in the supply of weapons (or parts of weapons) to Nepal, Lebanon and Georgia.

5. We ask H&K to provide an assurance that none of the weapons it is currently selling will pass into the hands of repressive regimes, arms traffickers, child soldiers, terrorist groups, organised criminals, or armed forces that deliberately target civilians, as so many H&K weapons have in the past. If H&K is prepared to make such an assurance, we would like to know how this can be guaranteed, given the lack of regulation of the international trade in small arms.

If you are willing, a delegation from the Shut Down H&K campaign would like to meet with representatives of Heckler & Koch to discuss our concerns in person.

We hope to hear from you soon.