On 22 December 2009, Dr Howard Fredrics, former Senior Lecturer of Music at Kingston University, London, was convicted in absentia of harassment against Sir George "Peter" Scott, Vice-Chancellor of Kingston University for having operated a website that revealed evidence of misconduct by the University. The conviction was handed down by the Kingston Magistrates Court despite a compelling police investigation report that indicated that there was no evidence that the site contained anything that could lead to such a charge. 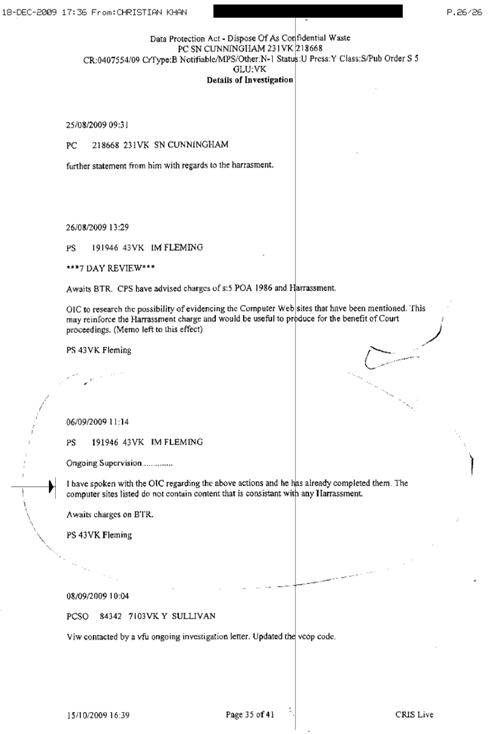 Dr Howard Fredrics failed to appear in Court on 22 December to answer charges that by virtue of operating a website,

http://www.sirpeterscott.com since July 2007, he had breached Section 6 of the Protection from Harassment Act 1997. The Act, which was devised to deter stalking, was, in this case, applied for the first time ever towards the dissemination of musical works contained on the website.

In addition to the songs and song parodies that refer to a number of widely-publicized scandals at the University in the past few years, including the National Student Survey Scandal, and the External Examiner Scandal, whereby staff were recorded pressurising students into falsifying their responses to the Survey in order to inflate Kingston University's position in the League Tables, and whereby an External Examiner in the now defunct School of Music was found by the Quality Assurance Agency to have been pressurised by School administrators into changing her damning report on academic standards.

Following that ruling, Prof Scott filed a complaint with the Kingston Police, alleging that Dr Fredrics' site allegedly constituted harassment of him personally, despite the fact that it contained no references to any matters relating to the personal or private life of Prof Scott, and the fact that the vast majority of the site did not relate at all to Prof Scott. Indeed a police report produced in September 2009 after a thorough investigation of the contents of the site, showed that there was no evidence whatsoever of any material that could sustain a charge of harassment. Despite this finding, however, the Crown Prosecution Service refused Dr Fredrics' solicitor's application for discontinuation of the prosecution, and the Court further refused an application for postponement when Dr Fredrics' solicitors were forced to withdraw from the case for reasons related to a separate professional matter on the day before the trial was set to begin.

As a result of the refusal (in breach of Article 6 of the European Convention on Human Rights) by the Court to postpone the case so that Dr Fredrics could locate suitable representation for the trial, and because both Dr Fredrics and one of his key witnesses both suffered from documented illnesses and were unable to appear, the trial went ahead in Dr Fredrics' absence. It was, however, only after the Court found Dr Fredrics guilty of harassment that the Clerk of the Court informed the presiding Magistrates and courtroom observers that Dr Fredrics' lawyers had withdrawn. By this time, however, the ruling was issued and Dr Fredrics' guilty verdict stands.

Following the trial, a warrant was issued for Dr Fredrics' arrest for having failed to appear in Court. His whereabouts are unknown, however, a spokesperson indicated that he intends to contest the verdict through the appeals process. If, however, he does present himself to authorities, it is likely that he will be held without bail pending his appeal, notwithstanding his ongoing poor state of health, and his current lack of legal representation.

Dr Fredrics is due to appear along with representatives of Kingston University at a Pre-Hearing Review on 6 January 2010 in the Employment Tribunal, followed by a seventeen-day full merits hearing in April-May 2010 of his case for unfair dismissal, whistleblower victimization, disability discrimination and wrongful/automatically unfair dismissal. The efforts by the University's lawyers to, in the name of Prof Scott, launch various civil and criminal proceedings against Dr Fredrics are seen by Dr Fredrics as thinly veiled attempts to silence his right to free speech and artistic expression, with the ultimate goal of preventing him from receiving a full and fair hearing of his ongoing Employment Tribunal case.

Right to Freedom of Expression Upheld by District Judge

Following a hearing on 23 April, 2010 before a District Judge at Kingston Magistrates' Court, the conviction of Dr Howard Fredrics on charges of harassment has been overturned and the case against Dr Fredrics is dismissed. At the hearing, Dr Fredrics' lawyer, Richard Thomas of Doughty Street Chambers argued successfully that the prosecution should not have been taken forward, and that the conviction breached his client's human rights under Articles 6 and 10 of the European Convention on Human Rights.

Dr and Mrs Fredrics will not be attending the re-trial on harassment charges schduled for 22-23 July 2010 for four reasons:

1. Immigration rules do not allow them entry to the UK
2. Dr Fredrics' poor health.
3. Lack of funds to travel to the UK
4. Threats to their safety.

In relation to 4. above, you may link to the following site to read witness statements from Dr and Mrs Fredrics outlining the documented basis for their security concerns:

On 22 July 2010, a District Judge sitting before the Kingston Magistrates' Court found "No Case To Answer" in the matter of R v Fredrics. The Judge determined that harassment laws were not intended to be used to protect the reputation of individual people. He also added that the website in question addressed purely professional matters, rather than personally criticizing Sir Peter Scott, and that in any event, there was nothing remotely harassing about the content of the site.