ZAMBOANGA CITY, Philippines – Dozens of journalists held a prayer rally Wednesday in Zamboanga City to remember and seek justice for the brutal slayings of 57 people, among them at least 30 journalists massacred last month in Maguindanao province in the southern Philippines. 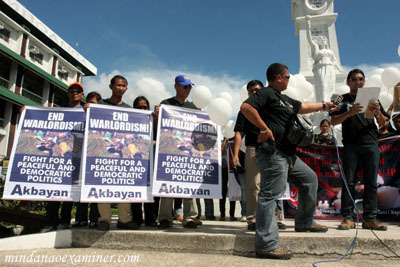 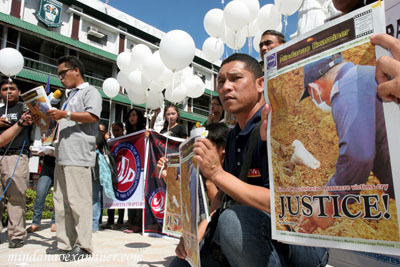 National Union of Journalists of the Philippines (NUJP)

The rally marked the first month of the murders blamed by authorities to the powerful political Ampatuan clan.

Police and military arrested the clan’s patriarch Andal Ampatuan Sr., the governor of Maguindanao, one of five provinces under the Muslim autonomous region, and his son and namesake who is also the mayor of Datu Unsay town and his brother, Zaldy Ampatuan, the regional governor and several brothers and relatives in connection to the killings.

The clan denied any involvements in the November 23 murders which police said was tied to rivalry between the Ampatuans and the Mangudadatus. Among those killed was the wife and sisters and relatives of Esmael Mangudadatu, the deputy mayor of Buluan town who is a candidate for governor in Maguindanao, a position Andal Ampatuan Jr., wanted.

Members of the National Union of Journalists of the Philippines (NUJP), the Zamboanga Press Club, the Peace Advocates Zamboanga, AKBAYAN (Citizens' Action Party) and the Kapisanan ng mga Brodkaster sa Pilipinas (KBP) trooped to the Rizal park in Zamboanga City where they held the prayer led by Spanish Catholic priest Angel Calvo.

They later released 57 white balloons to remember and seek justice for those killed in the attack.

“Today, December 23, 2009, marks one whole month since the most monstrous and evil mass killing of journalists in the history of the world, done by an equally monstrous and evil group of people – if one can call them people at all - in the province of Maguindanao. We, media practitioners in Zamboanga City, in this blackest of Christmas season in the Philippines which this massacre has made, no thanks to the current national political culture of corruption and impunity that bore it and the countless other acts of violence against the media and other defenders of democracy in the country in recent years, once again cry for justice for our 32 or more colleagues fallen in the accursed hills of Ampatuan in Maguidanao last November 23,” the NUJP said in a statement read by Darwin Wee, the group’s local chapter president.

The NUJP also lamented the slow progress of the government’s handling of the criminal charges filed against those accused in the gruesome killings.

“The legal actions taken so far against the allegedly untouchable Ampatuans are much too slow, too selective, too perverse in our collective opinion.As most citizens now, we fear that once again the proverbial justice delayed, justice denied round-around will be the eventual fate for our massacred colleagues and the other unlucky victims. If and when that happens, then it is not the suspect Ampatuans who really killed the 32 or so of our Mindanao media colleagues. Then, our Filipino journalists’ blood drips from the callous hand of a probable inutile, failed State,” Wee said.

Journalists also appealed to the United Nations to intervene in what had now become known as the “Maguindanao Massacre” and give justice to all those killed.

“Thus, we hereby appeal to the United Nations, International Criminal Court, ASEAN human rights commission, or any other honorable institutions and organizations around the world to intervene for and in behalf of the massacred victims of Maguindanao, for the sake of authentic justice for them - and eventually other politically oppressed peoples in the world. The ruthless and sustained violence against Filipino journalists today undermines and destroys not only Philippine democracy, but the whole world’s as well,” Wee said.

Similar prayer rallies were also held in different cities in the country, the NUJP said.