On the seventh day of Hanukkah, 2008, as Jews around the world were lighting the seventh candle on the menorah, commemorating the victorious rebellion of Judah Macabbee and the re-dedication of the Temple of Jerusalem 2200 years ago, a terrorist, Zionist entity, with the approval of the world’s last “Superpower” rained down death and destruction on men, women and children herded together on a sliver of the land they had once cultivated and shared with their fellow Semites. 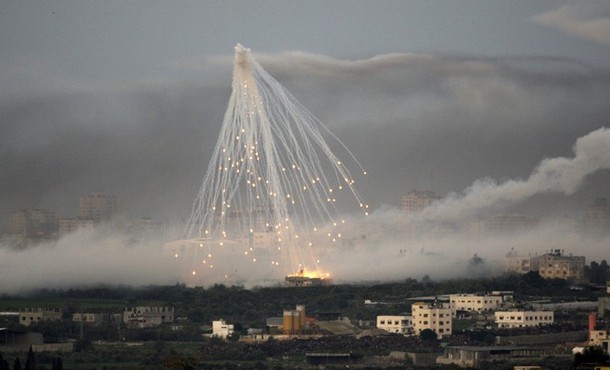 On the seventh day of Hanukkah, 2008, as Jews around the world were lighting the seventh candle on the menorah, commemorating the victorious rebellion of Judah Macabbee and the re-dedication of the Temple of Jerusalem 2200 years ago, a terrorist, Zionist entity, with the approval of the world’s last “Superpower” rained down death and destruction on men, women and children herded together on a sliver of the land they had once cultivated and shared with their fellow Semites.

Characteristically, a spokesman for the last Superpower blamed the herded people, the bombed and slaughtered, for their own miseries. It seems these herded Palestinians had had the effrontery to rebel against their Zionist masters in Tel Aviv, London, Jerusalem, New York and Washington.

For more than 60 years the Palestinian people had seen their lands taken from them, their olive groves ransacked, their children killed, their young men imprisoned, their women humiliated and beaten. During the decades that the last Superpower had fought a Cold War with the next-to-last Superpower, these people and their Arab cousins had been played and sacrificed like so many pawns on the chessboard of the Great Powers. Promises had been made, resolutions (like # 242) passed in the world body of the UN—but time passed, years passed and it was discovered that the words didn’t mean what they were supposed to mean. The Anglo-Americans and the Zionists made treaties of the kind that had been made with the native peoples of Turtle Island/North America. Treaties good as long as grass would grow and wind would blow. And the “sand niggers” of Palestine would discover, as the red man had discovered before him, sometimes grass don’t grow and wind don’t blow.

During the Festival of Lights, 2008, the lights went out all over Gaza. In two days of unabated horrors, 300 people were massacred, 900 wounded and thousands of lives of mothers, fathers, husbands, wives, children and friends were forever despoiled. During the Festival of Lights, 2008, the Zionists shamed the ancient religion of Judaism and proved to the world that theirs is not the universal religion of high-minded Leviticus: “And if thy brother be waxen poor and fallen in decay with thee; then thou shalt relieve him: yea, though he be a stranger or a sojourner; that he may live with thee.” The Zionists have shown that they are the children of a lesser God—a schizoid God who blesses and curses in the same chapter of the same text: “Both thy bondmen, and thy bondmaids, which thou shalt have, shall be of the heathen that are round about you; of them shall ye buy bondmen and bondmaids. … Of the children of the strangers that do sojourn among you, of them shall ye buy, and of their families that are with you, which they begat in your land: and they shall be your possession.”

In the films of my childhood, the “big movies” about World War II, the Nazis were easily identifiable as evil incarnate. They were stiff and military in their pressed uniforms and high, polished boots. Their gestures were stiff salutes, forearm thrust from heart to all the world in front of them, proclaiming “Heil Hitler!” But the clearest sign of their brutishness was their notion of collective punishment. If one person in an occupied town was driven to madness by the occupiers’ savagery and inhumanity; if one person struck out for the inalienable right to liberty; if one among the hundreds or thousands of villagers or townsfolk struck a Nazi officer—or killed a Nazi soldier—then the men of the occupied territory were lined up and forced to count, 1 to 10, 1 to 10, over and over and the tenth man in each group was bid to step forward and then executed.

Collective punishment. Not a new idea of modern warfare. As old as Yahweh ordering the destruction of every man, woman, child, sheep, goat and parakeet in some village in Canaan. And when the Superpower wanted to test out it’s mad-scientist weapon, its “terrible, swift sword,” it did not hesitate to collectively punish hundreds of thousands of men, women and children in Hiroshima and Nagasaki because their leaders had had the effrontery to attack a naval station that was being prepped for war against them. How dare the occupied rebel? How dare the war-trodden resist?

Occupation. After the French and Indian War (really a side-show in the World War between France and Britain) the Brits believed they had the right to quarter their soldiers in the homes of the colonists whom they’d spent blood and treasure to “defend.” The colonists, on the other hand, thought they’d be a lot better off without the damned redcoats pinching their daughters and mucking up the place.

Have we become a species too stupid to learn? HUMAN BEINGS DON’T LIKE BEING OCCUPIED. THEY WILL REBEL. THEY WILL CAST STONES. Even against a Goliath, they will cast stones. A Goliath that has spent the last six months of a “peace treaty” closing borders through a stranglehold of checkpoints, obstructing the flow of food and medicine to a malnourished and sickened population of one and a half million imprisoned souls, is likely to get a few sling-shots and home-made rockets pointed in his direction!

A century ago, Zionist zealots hijacked the little religion of Judaism, got on the bandwagon of 19th Century nationalist movements and dreamed very big. They dreamed of a homeland for the wandering Jews. Good enough … but when they cast about to see where to plant New Jerusalem they failed to see, they failed to imagine—because they could not imagine the humanity!—that other people—Semites—were living in the land, some of whom could trace their origins back to before the time of the Hebrews. And the Great Powers—Britain and America, especially—nursed the deluded dreams of the Zionists because it was in the interests of the Great Powers to challenge the old empire of the Ottomans and the emerging power of Germany.

During the Festival of Lights, 2008, before the last candle of the menorah could be lit, while the children played with their dreidles and received their Hannukah gelt, their blind and deranged parents and grandparents rained terror upon a shackled people in an open-air prison, ensuring that the children in the Holy Land and elsewhere in our tortured world would know neither peace nor joy nor light for many years to come.