Barack Obama is nothing if not a man of “firsts.” America’s first Black president has earned the dubious honor of possibly having delivered the first resoundingly pro-war speech to the Nobel Peace Prize Committee. “The new peace prize winner told the world that peace isn’t worth working for and is off the table for his consideration.” 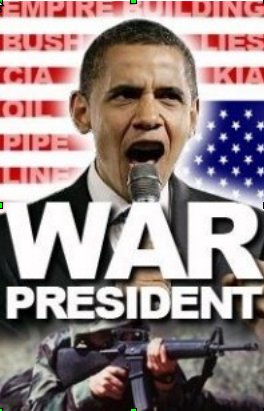 Barack Obama is nothing if not a man of “firsts.” America’s first Black president has earned the dubious honor of possibly having delivered the first resoundingly pro-war speech to the Nobel Peace Prize Committee. “The new peace prize winner told the world that peace isn’t worth working for and is off the table for his consideration.”

“Barack Obama rejected the very need for peace, mocked previous winners, and attempted to change the very definition of the word.”

The Norwegian Nobel Committee, who award the Nobel Peace Prize, created world wide feelings of dismay, shock and anger from the moment they announced that Barack Obama would be the 2009 honoree. How could the man who is waging two wars, who is responsible for the largest military budget in world history, be given the same honor that went to luminaries such as Martin Luther King, who fought tirelessly against militarism?

Barack Obama’s actual speech at the ceremony was worse, much worse than anything that could have been imagined when this honor was announced two months ago. His words were so horrific, so bereft of any of the ideals of peace makers, that he single handedly made the once prestigious Nobel Peace Prize worthless. If the winner speaks about the urgent need for military action and denigrates the very need for peace, then surely the wrong person was honored.

Obama’s acceptance speech was an offensive, sorry spectacle of lies, and trite, badly written language that came straight from a Bush era speech writer. It is fitting that he added insult to injury when he snubbed his hosts by skipping the traditional luncheon with the king of Norway. The committee’s foolish decision earned them this well deserved slap in the face.

The new peace prize winner told the world that peace isn’t worth working for and is off the table for his consideration. According to Obama, peace is kind of nice if the circumstances permit, but humans have been fighting for eons, so war is the natural state of affairs. Naïve peace lovers should allow him to do as he pleases without complaint.

“His words were so horrific, so bereft of any of the ideals of peace makers.”

“So yes, the instruments of war do have a role to play in preserving the peace.” Peace prize winners are supposed to tell the world that peace is not only a possibility, but an imperative for humanity. They usually tell us how they have overcome powerful interests to bring peace in situations where it didn’t seem possible. They tell us not to listen to the nay sayers who claim that peace is an idealistic impracticality. They give us true hope for the future and encourage us all to work for seemingly impossible goals. Instead Barack Obama rejected the very need for peace, mocked previous winners, and attempted to change the very definition of the word.

Obama could not have made these claims and twisted the meaning of language without telling a long list of whopping lies. “A non-violent movement could not have halted Hitler’s armies. Negotiations cannot convince al-Qaeda’s leaders to lay down their arms.” Both statements are untrue. Hitler could have been stopped by diplomacy if “democratic” nations like Britain and France had moved against the Nazi interventions against the elected government of Spain. They also chose to continue their capitulation when they cravenly handed over Czechoslovakia on a silver platter. Non-violent action might have stopped Hitler before his armies were ever on the move.

As for al-Qaeda, Obama has no way of knowing if they would enter into negotiations with the United States. Neither he nor his predecessor ever sought to negotiate with them. Obama gets credit for being a very intelligent man, yet he can’t manage to find a way to establish diplomatic contacts and discussions with what is essentially a small group of individuals with very few arms. Despite what Obama says, peace talks and treaties have also been conducted from time immemorial. Endless war results from choices made by the Obamas of the world. It is never an inevitability.

“According to Obama, peace is kind of nice if the circumstances permit, but humans have been fighting for eons, so war is the natural state of affairs.”

Obama’s speech was filled with falsehoods that are obvious to anyone with even a cursory knowledge of history. “America has never fought a war against a democracy, and our closest friends are governments that protect the rights of their citizens.” Jean-Bertrand Aristide, Salvador Allende, and Manuel Zelaya were all democratically elected, yet they and their respective governments fell victim to the United States and/or to its proxies. As for friends of the American government, they have been and continue to be dictators, torturers and invaders. As for “closest friends”, Saddam Hussein was a friend of the United States when he actually possessed and used weapons of mass destruction.

Having been emboldened by the peace prize committee which seems not to believe in peace any longer, Obama lost what little shame he had left. He had the gall to criticize Somalia, a nation destroyed by America and its proxy Ethiopia. “America alone cannot secure the peace … This is true in failed states like Somalia, where terrorism and piracy is joined by famine and human suffering.” The famine and suffering in Somalia is the result of terror inflicted by George W. Bush and now Barrack Obama. The United States deliberately intervened when Somalia was on the mend and recovering from years of bloodshed. It is outrageous that the faux peace maker would have the nerve to even mention Somalia in his speech. Then again, he had the nerve to accept his undeserved honor, why not make the most of it by insulting the intelligence of millions of people.

“The Obama doctrine sounds an awful lot like the Bush doctrine.”

Obama now has his own noxious “doctrine” to inflict upon the world. “I – like any head of state – reserve the right to act unilaterally if necessary to defend my nation.” It sounds an awful lot like the Bush doctrine, which means that the United States can do anything it likes wherever and whenever it likes. Of course Bush and now Obama claim they are defending their nation when they send drones to kill people in Afghanistan and Pakistan. A war never begins with a tyrant honestly announcing his tyranny. Every war is just to those who choose to wage it, no matter how specious their arguments.

It is disheartening to see the entire world fall under the sway of Barrack Obama. Is no one immune? Black Americans swoon with unwarranted feelings of race pride. White progressives forget the most basic rules of political engagement. Now a group of Norwegians get the vapors because Bush is out of office and his successor is black, and we are all subjected to loathsome speeches from an American president who says he doesn’t seek empire even as he does just that.

Perhaps the peace prize committee did the world a favor after all. We now know not to live by their pronouncements and decisions or assume they have some superior knowledge which escapes the rest of us. They are part of that class which decides who is and is not worthy of honor and special consideration. When all is said and done, we depend on ourselves and our convictions. We know what peace is and we know what it looks like. In the future, Thorbjørn Bagland and the rest of the Norwegian Nobel Committee can return to the obscurity they so well deserve and we can return to the serious business of working for a peaceful world.