US' Next War Target: YEMEN

Yemen is US' Next Target on War Against Terrorism ... Obama promised to crush Al-Qaeda in Yemen ... The US government announced its relentless commitments to crush terrorists in Yemen. Yesterday, Barack Obama promised ‘accelerated offensive’ against militants in Yemen by citing the example of a 23-year-old Nigerian who supposedly wanted to bomb a US bound airliner. The president of that North American country said he would commit ‘every element of national power’ to perform another mission in the Middle East, a region which holds huge oil and gas reserves. But many experts have questioned Washington's seemingly aggressive military drive into the Middle East as whether it is designed to destroy the Al-Qaeda militants or just making up excuses to boost military presence to control vital energy resources. 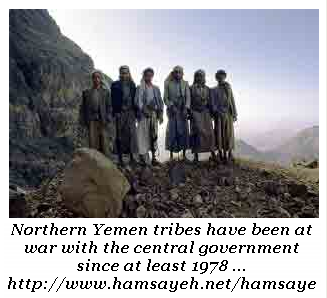 The US government decided to attack another country based on the assumption that the Nigerian bomber visited Yemen before his attempted bombing of the airliner. The main problem is where are those Al-Qaeda elements in Yemen, a country currently experiencing a factional war between Houthis in the north and the government forces since at least 1978.
US air force earlier this month launched several cruise missile attacks on suspected Al-Qaeda targets but instead killed a few civilians. The Yemeni government receives $ 70 million a year in financial assistance and more from pipeline project from Washington to join the war on terrorism.

http://www.hamsayeh.net/hamsayehnet_iran-international%20news716.htm
Al-Qaeda in the Arabian Peninsula (From Wikipedia, the free encyclopedia) Al-Qaeda in the Arabian Peninsula (AQAP) is a militant Islamist organization, primarily active in Saudi Arabia. It was named for al-Qaeda and claims to be subordinate to that group and its leader Osama bin Laden. Like al-Qaeda, it opposes the Al Saud monarchy. .....

Picture: Northern Yemen tribes have been at war with the central government since at least 1978 ...