January 1 will usher in the last year of the first decade of a new millennium and ten consecutive years of the United States conducting war in the Greater Middle East.

American troops will continue to fan out to most all parts of the world. Everywhere, that is, except to their own nation's borders 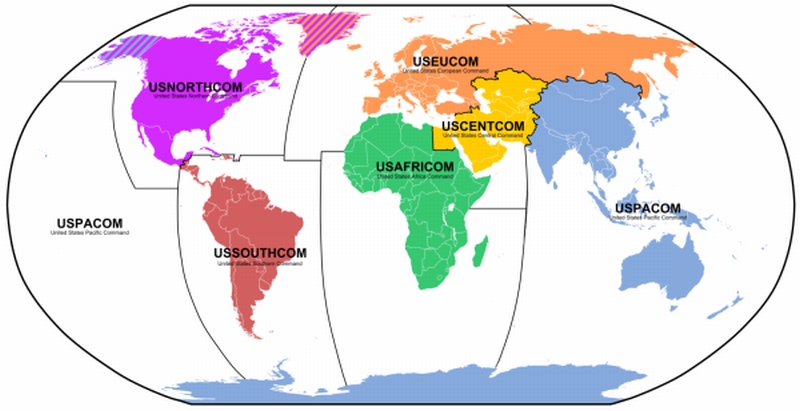 January 1 will usher in the last year of the first decade of a new millennium and ten consecutive years of the United States conducting war in the Greater Middle East.

Beginning with the October 7, 2001 missile and bomb attacks on Afghanistan, American combat operations abroad have not ceased for a year, a month, a week or a day in the 21st century.

The Afghan war, the U.S.'s first air and ground conflict in Asia since the disastrous wars in Vietnam and Cambodia in the 1960s and early 1970s and the North Atlantic Treaty Organization's first land war and Asian campaign, began during the end of the 2001 war in Macedonia launched from NATO-occupied Kosovo, one in which the role of U.S. military personnel is still to be properly exposed [1] and addressed and which led to the displacement of almost 10 percent of the nation's population.

In the first case Washington invaded a nation in the name of combating terrorism; in the second it abetted cross-border terrorism. Similarly, in 1991 the U.S. and its Western allies attacked Iraqi forces in Kuwait and launched devastating and deadly cruise missile attacks and bombing sorties inside Iraq in the name of preserving the national sovereignty and territorial integrity of Kuwait, and in 1999 waged a 78-day bombing assault against Yugoslavia to override and fatally undermine the principles of territorial integrity and national sovereignty in the name of the casus belli of the day, so-called humanitarian intervention.

Two years later humanitarian war, as abhorrent an oxymoron as the world has ever witnessed, gave way to the global war on terror(ism), with the U.S. and its NATO allies again reversing course but continuing to wage wars of aggression and "wars of opportunity" as they saw fit, contradictions and logic, precedents and international law notwithstanding.

Several never fully acknowledged counterinsurgency campaigns, some ongoing - Colombia - and some new - Yemen - later, the U.S. invaded Iraq in March of 2003 with a "coalition of the willing" comprised mainly of Eastern European NATO candidate nations (now almost all full members of the world's only military bloc as a result of their service).

The Pentagon has also deployed special forces and other troops to the Philippines and launched naval, helicopter and missile attacks inside Somalia as well as assisting the Ethiopian invasion of that nation in 2006. Washington also arms, trains and supports the armed forces of Djibouti in their border war with Eritrea. In fact Djibouti hosts the U.S.'s only permanent military installation in Africa to date [2], Camp Lemonier, a United States Naval Expeditionary Base and home to the Combined Joint Task Force - Horn of Africa (CJTF-HOA), placed under the new U.S. Africa Command (AFRICOM) when it was launched on October 1, 2008. The area of responsibility of the Combined Joint Task Force - Horn of Africa takes in the nations of Djibouti, Ethiopia, Eritrea, Kenya, Seychelles, Somalia, Sudan, Tanzania, Uganda and Yemen and as "areas of interest" the Comoros, Mauritius and Madagascar.

That is, much of the western shores of the Arabian Sea and the Indian Ocean, among the most geostrategically important parts of the world. [3]

U.S. troops, aerial drones, warships, planes and helicopters are active throughout that vast tract of land and water.

With senator and once almost vice president Joseph Lieberman's threat on December 27 that "Yemen will be tomorrow's war" [4] and former Southern Command chief and NATO Supreme Allied Commander Europe Wesley Clark's two days later that "Maybe we need to put some boots on the ground there," [5] it is evident that America's new war for the new year has already been identified. In fact in mid-December U.S. warplanes participated in the bombing of a village in northern Yemen that cost the lives of 120 civilians as well as wounding 44 more [6] and a week later "A US fighter jet...carried out multiple airstrikes on the home of a senior official in Yemen's northern rugged province of Sa'ada...." [7]

The pretext for undertaking a war in Yemen in earnest is currently the serio-comic "attempted terrorist attack” by a young Nigerian national on a passenger airliner outside of Detroit on Christmas Day. The deadly U.S. bombing of the Yemeni village mentioned above occurred ten days earlier and moreover was in the north of the nation, although Washington claims al-Qaeda cells are operating in the other end of the country. [8]

Asia, Africa and the Middle East are not the only battlegrounds where the Pentagon is active. On October 30 of 2009 the U.S. signed an agreement with the government of Colombia to acquire the essentially unlimited and unrestricted use of seven new military bases in the South American nation, including sites within immediate striking distance of both Venezuela and Ecuador. [9] American intelligence, special forces and other personnel will be complicit in ongoing counterinsurgency operations against the Revolutionary Armed Forces of Colombia (FARC) in the nation's south as well as in rendering assistance to Washington's Colombian proxy for attacks inside Ecuador and Venezuela that will be portrayed as aimed at FARC forces in the two states.

Targeting two linchpins of and ultimately the entire Bolivarian Alliance for the Peoples of Our America (ALBA), Washington is laying the groundwork for a potential military conflagration in South and Central America and the Caribbean. After the U.S.-supported coup in Honduras on June 28, that nation has announced it will be the first ALBA member state to ever withdraw from the Alliance and the Pentagon will retain, perhaps expand, its military presence at the Soto Cano Air Base there.

A few days ago "The Colombian government...announced it is building a new military base on its border with Venezuela and has activated six new airborne battalions" [10] and shortly afterward Dutch member of parliament Harry van Bommel "claimed that US spy planes are using an airbase on the Netherlands Antilles island of Curaçao" [11] off the Venezuelan coast.

In October a U.S. armed forces publication revealed that the Pentagon will spend $110 million to modernize and expand seven new military bases in Bulgaria and Romania, across the Black Sea from Russia, where it will station initial contingents of over 4,000 troops. [12]

In early December the U.S. signed a Status of Forces Agreement (SOFA) with Poland, which borders the Russian Kaliningrad territory, that "allows for the United States military to station American troops and military equipment on Polish territory." [13] The U.S. military forces will operate Patriot Advanced Capability-3 (PAC-3) and Standard Missile 3 (SM-3) batteries as part of the Pentagon's global interceptor missile system.

At approximately the same time President Obama pressured Turkish Prime Minister Recep Tayyip Erdogan to base missile shield components in his country. "We discussed the continuing role that we can play as NATO allies in strengthening Turkey's profile within NATO and coordinating more effectively on critical issues like missile defense," [14] in the American leader's words.

"Foreign Minister Ahmet Davutoglu has hinted his government does not view Tehran [Iran] as a potential missile threat for Turkey at this point. But analysts say if a joint NATO missile shield is developed, such a move could force Ankara to join the mechanism." [15]

2010 will see the first foreign troops deployed to Poland since the breakup of the Warsaw Pact in 1991 and the installation of the U.S's "stronger, swifter and smarter" (also Obama's words) interceptor missiles and radar facilities in Eastern Europe, the Middle East and the South Caucasus. [16]

U.S. troop strength in Afghanistan, site of the longest and most wide-scale war in the world, will top 100,000 early in 2010 and with another 50,000 plus troops from other NATO nations and assorted "vassals and tributaries" (Zbigniew Brzezinski) will represent the largest military deployment in any war zone in the world.

American and NATO drone missile and helicopter gunship attacks in Pakistan will also increase, as will U.S. counterinsurgency operations in the Philippines and Somalia along with those in Yemen where CIA and Army special forces are already involved.

U.S. military websites recently announced that there have been 3.3 million deployments to Afghanistan and Iraq since 2001 with 2 million U.S. service members sent to the two war zones. [17]

In 2010 they will be sent abroad in even larger numbers to man airbases and missile sites, supervise and participate in counterinsurgency operations throughout the world against disparate rebel groups, many of them secular, and wage combat operations in South Asia and elsewhere. They will be stationed on warships and submarines equipped with cruise and long-range nuclear missiles and with aircraft carrier strike groups prowling the world's seas and oceans.

They will construct and expand bases from Europe to Central and South Asia, Africa to South America, the Middle East to Oceania. With the exception of Guam and Vicenza in Italy, where the Pentagon is massively expanding existing installations, all the facilities in question are in nations and even regions of the world where the U.S. military has never before ensconced itself. Practically all the new encampments will be forward bases used for operations "down range," generally to the east and south of NATO-dominated Europe.

U.S. military personnel will be assigned to the new Global Strike Command and for expanded patrols and war games in the Arctic Circle. They will serve under the Missile Defense Agency to consolidate a worldwide interceptor missile network that will facilitate a nuclear first strike capability and will extend that system into space, the final frontier in the drive to achieve military full spectrum dominance.

American troops will continue to fan out to most all parts of the world. Everywhere, that is, except to their own nation's borders.

3) Cold War Origins Of The Somalia Crisis And Control Of The Indian Ocean
Stop NATO, May 3, 2009