Here is a report by Mathaba reporter Karen Dabrowska along with a number of photos taken by myself. 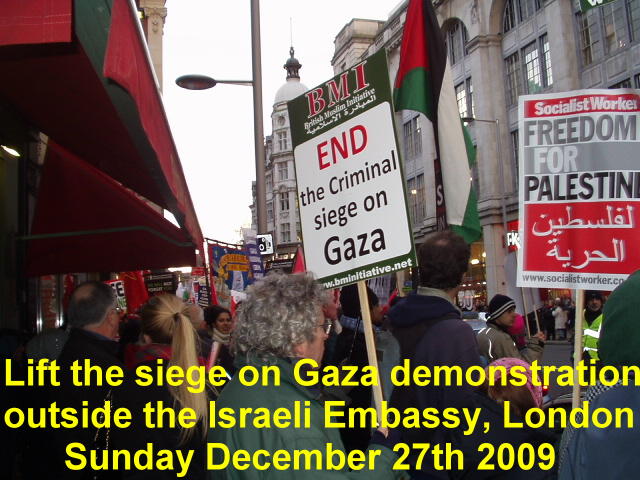 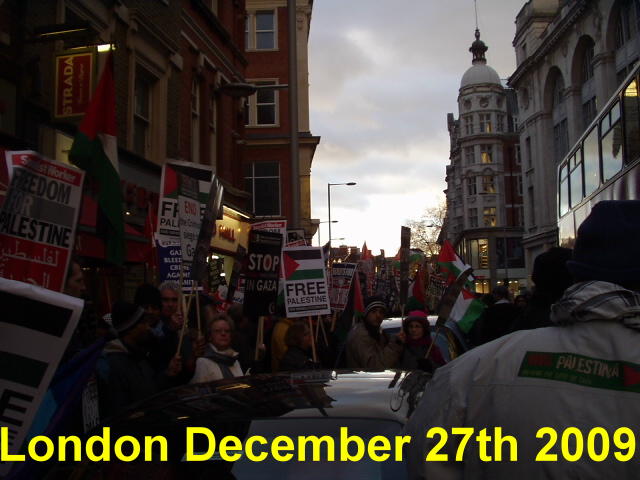 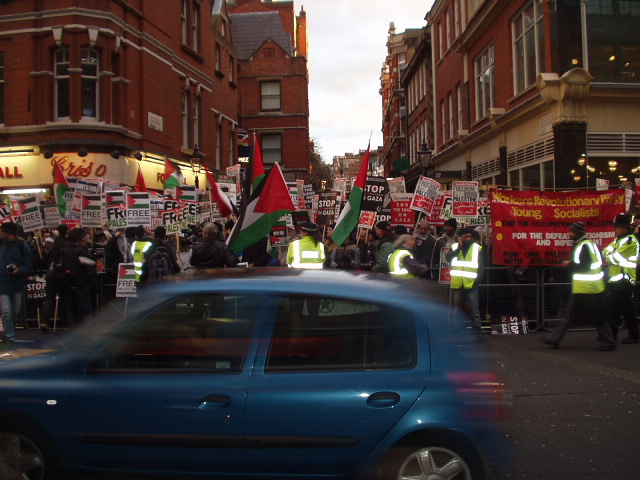 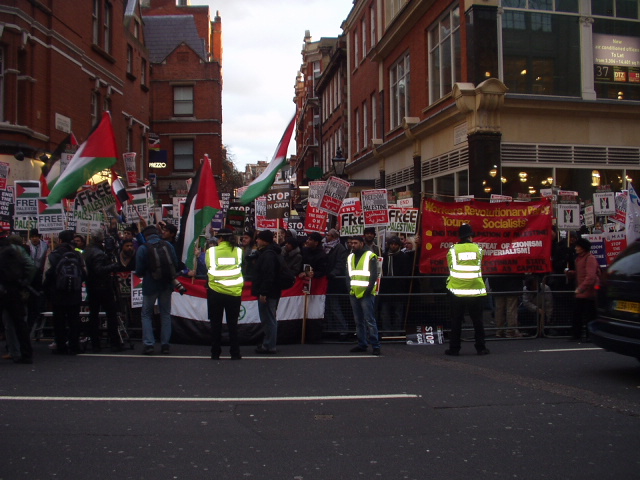 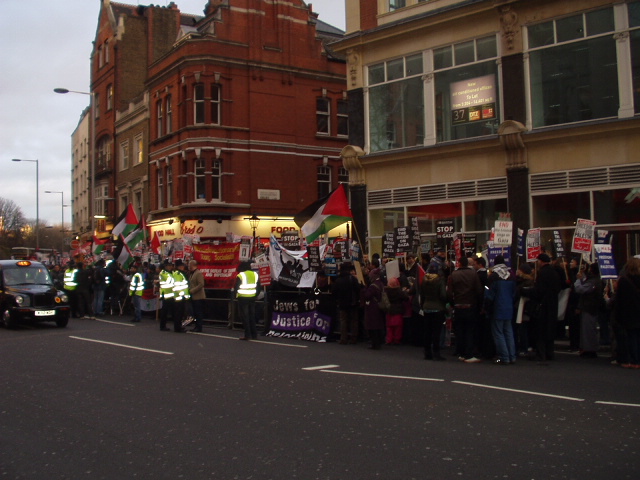 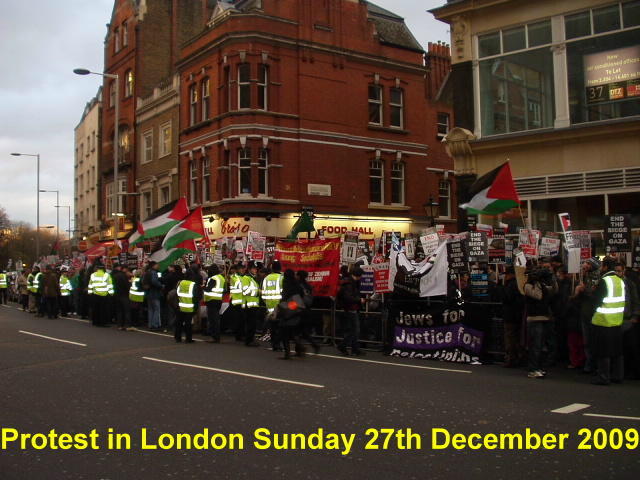 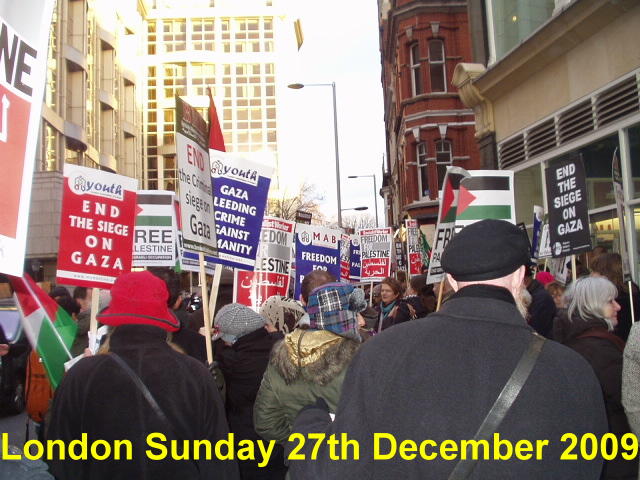 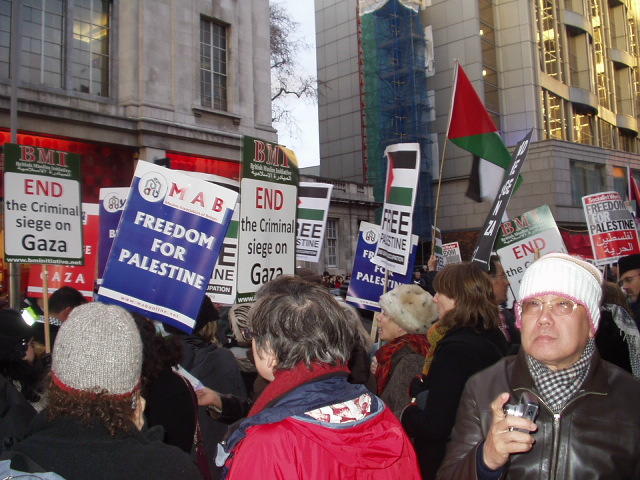 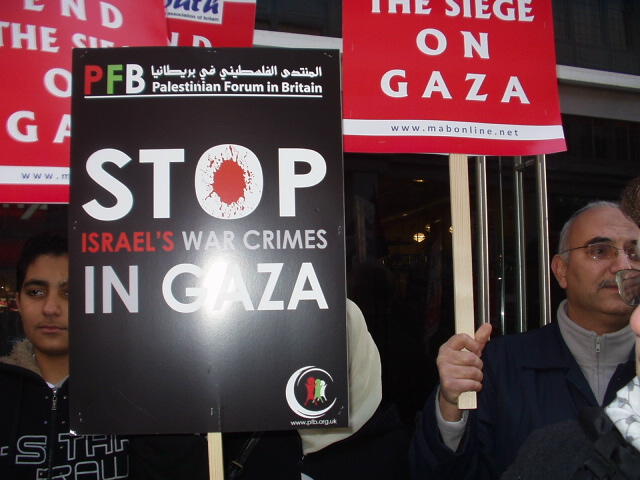 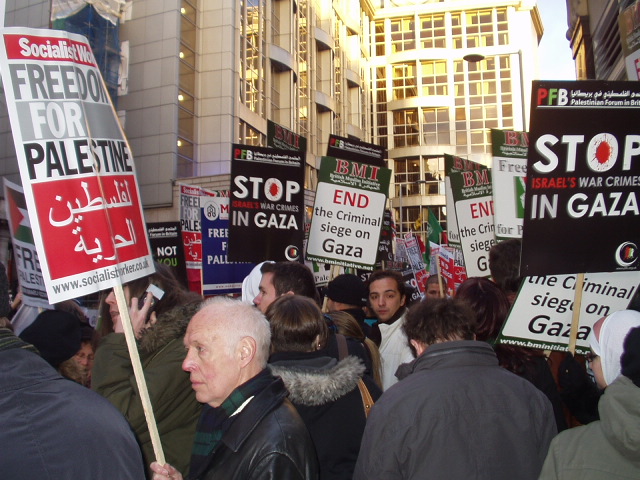 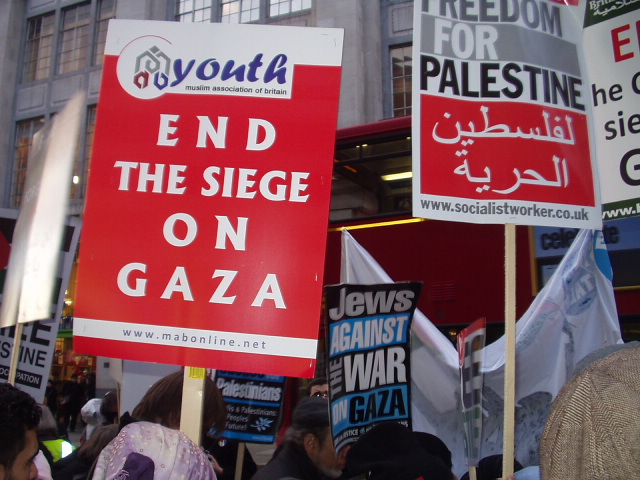 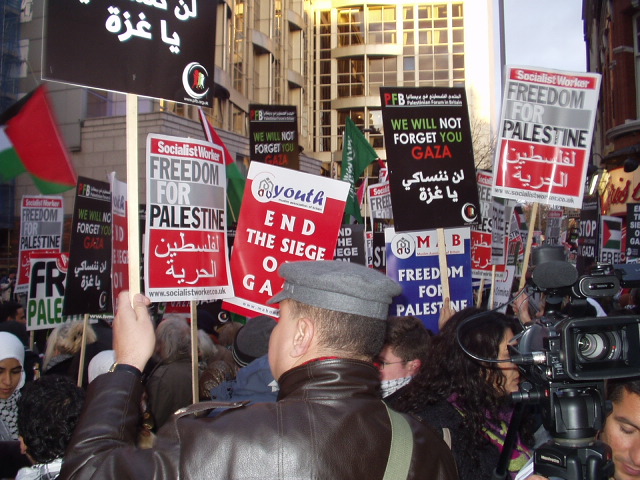 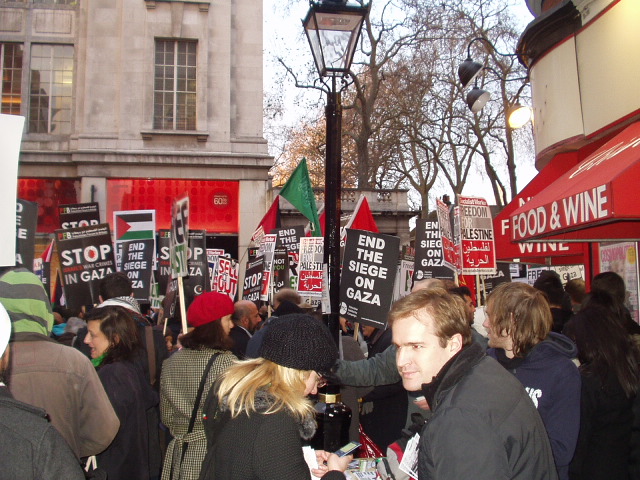 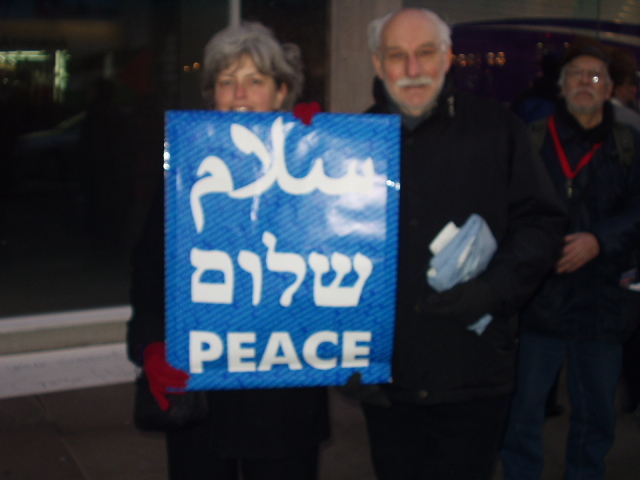 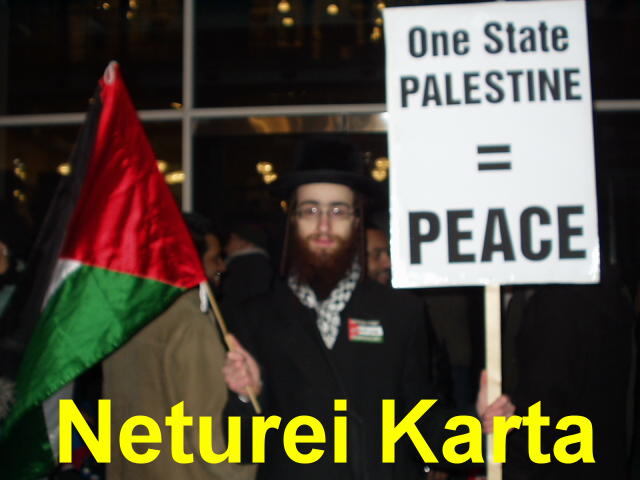 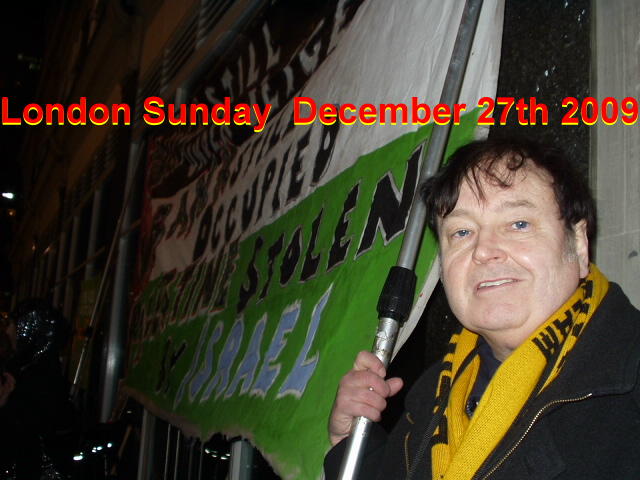 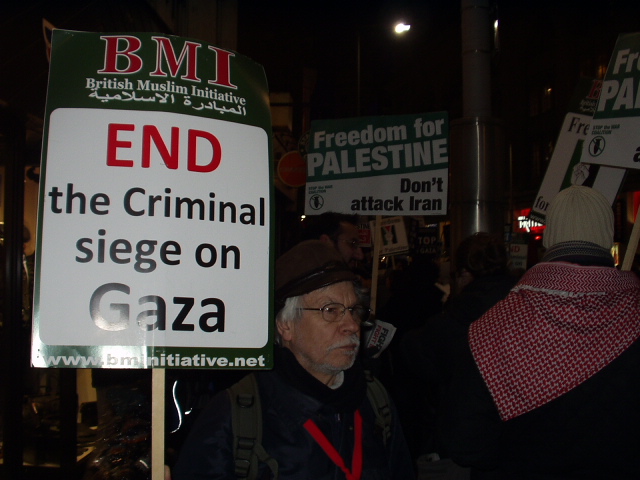 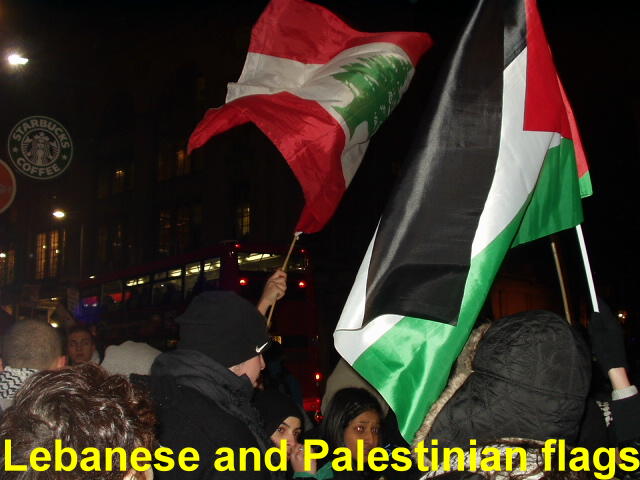 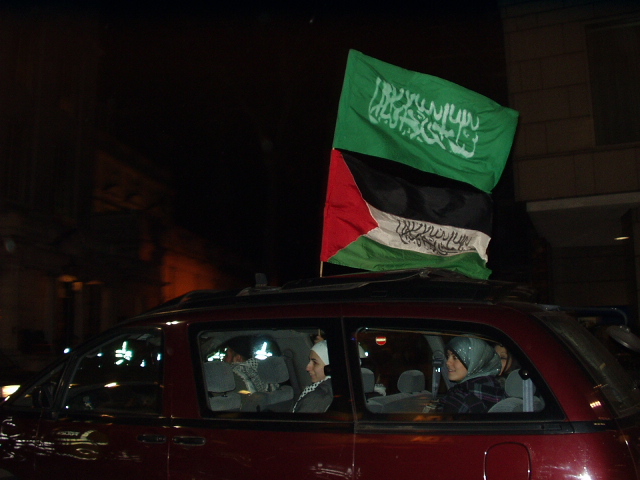 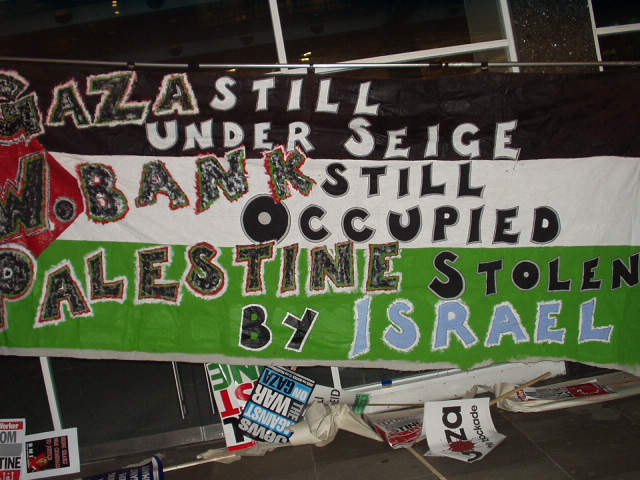 
There was a large demonstration of at least 500 people outside the Israeli Embassy in the High Street, Kensington, London on Sunday 27th December 2009. Here is a report by Mathaba reporter Karen Dabrowska along with a number of photos taken by myself. The turnout which was variously estimated as between 500 and 2,000 was impressive on a freezing cold London day. I was at the protest from its start at 3.00pm until its finish at around 5.30pm. The demonstration was both lively and colourful and also very visible. There were no reported arrests. As can be seen below many MPs (Members of Parliament) endorsed the demonstration for Gaza.


London Demonstration Calls For An End To The Siege Of Gaza


Around 1000 protestors from all sectors of British society called for an end to the siege of Gaza in a demonstration outside the Israeli Embassy today.

The demonstration, held on the first anniversary of the start of Israel’s 22-day military offensive against Gaza which began on December 27th 2008, was organised by the Palestine Solidarity Campaign, Stop the War, British Muslim Initiative and the Campaign Against Nuclear Disarmament.

Henning a social worker said he was appalled by the conditions in Gaza and the fact that Israel was getting away with murder. He was hopeful that the protest would raise awareness about conditions in Gaza. “At present there is very little media coverage, they are playing things down and diverting attention away from Gaza”, he said.

Lindsay, a medical secretary, said she did not like the way Israel thinks it can throw everybody off the land. There is enough land for all the people to live in peace. The Palestinians cannot continue living on the edge of society.

Donal a medical consultant commented that Israel has very little policy other than taking more Palestinian land. The war crime that is Gaza started a year ago and is continuing with the siege of two million people. The Palestinians are being subjected to collective punishment and have been deprived of medical facilities and all facilities essential for everyday life. There will never be peace as long as the Palestinians have no peace.

Jenny of Jewish origin said she felt ashamed about what Israel is doing. “What they are doing is not in my name”, she emphasised. “As a people we have known displacement, persecution and discrimination and this is what we are inflicting on the Palestinians. We are breaking all international laws and for me this is scandalous. I would be here even if Israel was not in the West Bank and Gaza because of the way the Palestinians are treated in Israel itself. The concept of a state based on an ethnic identity is bound to lead to discrimination. I would like to see one state where everyone has equal rights and is equal in the eyes of the law. A state like South Africa today. The four million Palestinians who are stranded around the borders of Israel should be allowed to return”.

Jeanne, a pensioner, said that the Israeli occupation of Gaza is a crime. “They have flouted international laws through the building of settlements. I have great sympathy with the Palestinians as I have seen what occupation is like”. Jenny and her husband visited Palestine last year. Their first visit was in 1974 and they were shocked by the changes and the separation of the Palestinian people. “They can’t go on the new roads; they can’t get to their places of work. The attitude of the soldiers in dealing with the Palestinians at check points in shocking. It has been reported that the operation against Gaza was in retaliation at Hamas for firing rockets but it was Israel which broke the truce. Not all the facts are always brought out. There is an extraordinary absence of a public outcry about what is happening in Gaza. The anniversary of the demolition of the Berlin Wall would have been a good time to draw attention to the Gaza Wall but this did not happen”.

Roger a careers and education adviser said he was against Israel’s policies with regard to the Palestinians. “We are attempting to influence our own government to take some action on Palestine and to lift the siege of Gaza so good can be let through”.

A group of British MPs have called for an end to the blockade of the Gaza Strip, in an open letter published today.

The letter said: One year on from Israel's invasion of the Gaza Strip the Israeli government continues to imprison 1.5 million Palestinians and prevent the rebuilding of its shattered infrastructure. Israel's blockade of Gaza, described by the UN Fact Finding Mission as "collective punishment", stops reconstruction materials and all the necessary humanitarian aid from reaching those that so desperately require it, whilst the continued lack of access from the Rafah crossing on the border with Egypt only adds to the suffering of the population.

Over 1,300 Palestinians, including 352 children, were killed during Operation Cast Lead, which damaged or destroyed 50,000 homes, 280 schools and kindergartens, as well as numerous hospitals.

As a result of the blockade however homes cannot be rebuilt and the civilian population is forced to survive in the most appalling conditions, with many Palestinians, now suffering in the grip of winter, forced to live in temporary shelters or partially destroyed homes. Essential food items and fuel are routinely prevented from entering the territory, with the result that over two thirds of the population currently live in poverty and require United Nations aid merely to survive. Tens of thousands of children meanwhile suffer from iron and vitamin deficiencies.

We call upon all parties to alleviate the suffering of the people of Gaza and specifically the British government and the international community to apply meaningful pressure upon Israel to abide by UN Security Council Resolution 1860, to end this flagrant abuse of international law and lift the blockade. The confinement and punishment of an entire population is no way to bring about peace for all of the people of the Middle East.

Graham Bambrough, Parliamentary Officer at the Council for Arab British Understanding, welcomed the publication of the letter:

"This letter demonstrates the level of concern that exists within the British parliament for the people of Gaza. I hope that the UK government will apply meaningful pressure upon Israel to fulfil its obligations under international law and end this collective punishment of an entire population."

"The people of Gaza are sheltering throughout the winter in inadequate accommodation, living off food aid and wondering why the world has forgotten about them. This intolerable situation is not the result of an act of nature however; it is the result of a political decision. The suffering could end tomorrow; Israel must abide by UN Security Council Resolution 1860, lift the blockade and allow reconstruction materials and humanitarian aid reaches those that so desperately require it."