On Thursday, 31 December 2009, a video was released through the UK’s Guardian Newspaper, claiming that “after a year-long investigation, GuardianFilms has exclusively uncovered the story of what happened to the five Britons kidnapped in Iraq on 29 May 2007, as the only survivor, Peter Moore, is released”.

Granted, this PR effort on behalf of the British Secret Intelligence Services, using Guardian Newspapers as a front, is a cut-above U.S. IntelCenter’s amateurish video releases of ‘Al-CIA-Duh’ agents. 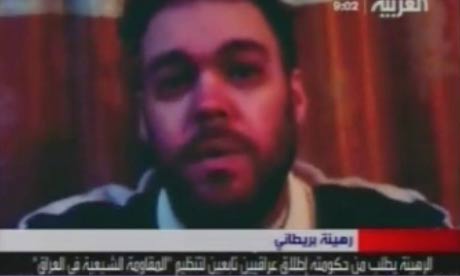 On Thursday, 31 December 2009, a video was released through the UK’s Guardian Newspaper, claiming that “after a year-long investigation, GuardianFilms has exclusively uncovered the story of what happened to the five Britons kidnapped in Iraq on 29 May 2007, as the only survivor, Peter Moore, is released”. [1]

"So — so I believe you. My whole point here is — is that al-Qaeda — al-CIAda
didn’t carry out the attacks of 9/11 as you yourself have said. His first interview
said that he didn’t do it. Then they produced these computer-morphed videos and
fake audios that have been checked. And the Intel Center, headed up by
Rumsfeld’s former lieutenant, the private group was caught putting the same video
layer in with the original video. So it’s been proven that they’re creating these fake
videos."

But wait.. there is also another US angle to this .. An article in the Guardian yesterday (1 Jan 2010), Moore was ‘certainly’ held in Iran, says Petraeus [4] – “American intelligence contradicts foreign office line as Peter Moore arrives in UK”, by Julian Borger, diplomatic editor (SIS asset).

"US intelligence is convinced that Peter Moore spent at least some of his 31
months of captivity in Iran, one of America’s most senior military commanders
said today.

As Moore, a computer consultant from Lincoln, flew back to Britain, General David
Petraeus, the head of US central command, confirmed the American assessment
that Moore – seized with four bodyguards in Baghdad in 2007 – had “certainly”
been taken across the border into Iran. The Iranian role in the abduction, reported
on the Guardian website on Wednesday, suggests Tehran’s influence in Iraqi
politics is even more pervasive than previously thought.

The Foreign Office has repeatedly said that there is no evidence Moore was ever
held inside Iran, dismissing the report as “speculation”. But General Petraeus flatly
contradicted the official British view at a Baghdad press conference."

Are the US and Britain gearing up for an actual attack on Iran? or possibly there is now a change of tactics and the US and Britain have decided to go the road of a more prolonged ‘Dirty War’ with PR stunts such as the video below, they have been using Al-CIA-Duh within Iran to carry-out terrorist atrocities for some time now. Certainly Petraeus is a liar. The one truthful statement in the Guardian article came from the Iranian side:

"Iran has denied involvement in the abduction of the Britons, and state television
in Iran has described the Guardian’s reporting as 'part of a psychological war
against Iran'."

Here is GuardianFilms video, judge for yourselves:

The Guardian: Iran test-fires missile that could hit Europe


1) The Guardian: Iran test-fires missile that could hit Europe (December 2009)


excerpts from: US condemns Iran's 'provocative actions' as regime test-fires missile that could hit Europe (*)

The US and its allies yesterday branded as provocative Iran's test-firing of an upgraded version of its most advanced [ballistic] missile, one claimed to be capable of hitting parts of Europe.

The launch […] follows a spate of reports, by the Guardian and the Times, suggesting that clandestine military aspects of Iran's nuclear programme may be more advanced than was previously realised.

The missile launched yesterday, thought to be more accurate than its predecessor, the Shahab, offers Iran the prospect of creating mayhem not only by retaliating against the west's oil lifeline in the gulf but also against Israel and targets in Europe.


(*) title of the print edition

Iran is working on a longer-range version of the Shahab-3 [ballistic] missile it flight-tested last week and it could be deployed in two to five years, […] Martin Indyk, assistant [US] secretary of state for Near East affairs, told reporters […]

U.S. intelligence agencies estimate that the Shahab-4 will have a range of up to 1,240 miles - enough to hit targets as far away as Central Europe.

As usual, not a shred of evidence has been provided by the likes of serial fruitloop Alex Jones that these are 'computer morphed videos and fake audios'.

And if you are going to cite the 'voice morphing' technology used in 9/11 then don't bother, because it is bollocks, and the inventor of the technology has himself said as much.

Well, as you acknowledge, the Guardian said it spent a year on this story. You, on the other hand, spent a whole four days. That may well explain why your story is so weak.