Early this morning the Japanese whale killing ship Shonan Maru2 rammed and destroyed the Sea Shepherd protest vessel the Ady Gil. It was a miracle no Sea Shepherd crew were killed or seriously injured. 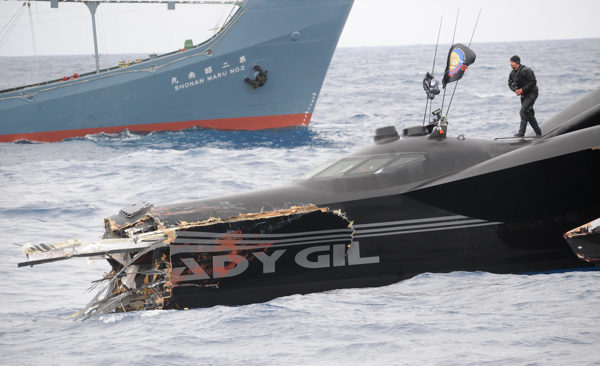 From Sea Shepherd CEO Steve Roest.
I was woken at 4am GMT to hear that the Japanese whaler and security vessel Shonan Maru2 had deliberately rammed the small Sea Shepherd intercept vessel Ady Gil. The Ady Gil had lost the front 3 metres of her nose completely and it is a miracle nobody was seriously injured or killed.

Captain Watson has made the following statement to the press:

Six crew crewmembers, four from New Zealand, one from Australia and one from the Netherlands were immediately rescued by the crew of the Sea Shepherd ship Bob Barker. None of the crew Ady Gil crew were injured.

The Ady Gil is believed to be sinking and chances of salvage are very grim.

According to eyewitness Captain Chuck Swift on the Bob Barker, the attack happened while the vessels were dead in the water. The Shonan Maru #2 suddenly started up and deliberately rammed the Ady Gil ripping eight feet of the bow of the vessel completely off. According to Captain Swift, the vessel does not look like it will be saved.

“The Japanese whalers have now escalated this conflict very violently.” Said Captain Paul Watson. “If they think that our remaining two ships will retreat from the Southern Ocean Whale Sanctuary in the face of their extremism, they will be mistaken. We now have a real whale war on our hands and we have no intention of retreating.”

Captain Paul Watson onboard the Steve Irwin is racing towards the area at 16 knots but still remains some five hundred miles to the north. The Bob Barker will has temporarily stop the pursuit of the Nisshin Maru to rescue the crew of the Ady Gil. The Japanese ships refused to acknowledge the May Day distress of the Ady Gil and used the incident to break away from the scene of the ramming.

Until this morning the Japanese were completely unaware of the existence of the Bob Barker. This newest addition to the Sea Shepherd fleet left Mauritius off the coast of Africa on December 18th and was able to advance along the ice edge from the West as the Japanese were busy worrying about the advance of the Steve Irwin from the North.

“This is a substantial loss for our organization,” said Captain Watson. “The Ady Gil, the former Earthrace vessel, represents a loss of almost two million dollars. However the loss of a single whale is of more importance to us and we will not lose the Ady Gil in vain. This blow simply strengthens our resolve, it does not weaken our spirit.”

“Australia needs to send a naval vessel down here as soon as possible to protect both the whales and the Australian citizens working to defend these whales.” Said Steve Irwin Chief Cook Laura Dakin of Canberra. “This is Australian Antarctic Territorial waters and I see the Japanese whalers doing whatever they want with impunity down here without a single Australian government vessel anywhere to be found. Peter Garrett, I have one question for you. Where the bloody hell are you?”

It is worth remembering that the sea shepherd organisation has not only sunk a number of other people's boats but has also celebrated the fact. So for them to cry-wolf and say this is despicable is a bit two-faced in my opinion

Looking at the video the Ady Gil is clearly moving with the japanese ship so I don't believe they were caught unawares like they like to give the impression. Given sea shepherds track record, they have clearly repeated flouted international regulations, particularly using all means to determine the risk of collision and taking positive, clear actions that are done in good time to avoid collision. I would also question their historic evidence in proceeding at a safe speed in order to take avoiding action in the prevailing conditions. They have also appeared to neglect the regulations where a power driven vessel must always give way to a vessel that is engaged in fishing

Their seamanship has always been questionable at best and they have always been an accident waiting to happen.

Videos of the ramming on Indymedia

The whalers are criminals under international law. The SSCS use very moderate tactics in pursuit of these criminals. If they were poaching in some other places they would be shot. The whalers have no right of resistance seeing as they are the ones in the wrong (e.g. the law won't let you hit a member of the public if he/she is arresting you lawfully) so SSCS has the right to complain even if there tactics were similar. In any case SSCS tactics are not in anyway similar as they have never sunk a boat with people on board.

There's still two other ships, several rigid speed boats, and a helicopter for the Japanese to deal with. They're not going to get off lightly.

The Ady Gil was an accident waiting to happen though really, it's constructed from light weight polymers as opposed to steel. It was obvious the Japanese would try to ram Sea Shepherds new vessel knowing full well that it wouldn't stand up to the damage. To be fair they were risking the lives of the activists by allowing the vessel to sail with them. However no doubt the activists knew such risks when they signed up to confront the murderers.

I'm all for whales, but it is a tactic of sea shepherds crew to cut across moving craft. If they insist on sailing that closely to other vessels then they are bound to come into a colision at some point

You can't be 'all for saving whales' and against SSCS enforcement tactics as no one else is saving the whales from the poachers. I don't know about that video you link to but SSCS has used ramming before - you are right, but have never harmed anyone. If the criminal whalers choose to poach then they can't complain when people try and stop them. The SSCS crew all choose to do what they do as well, so what's there to criticise?

will there be a demo outside the japanese embassy?