Anonymity: or how I learnt to stop worrying about FIT and masked up well 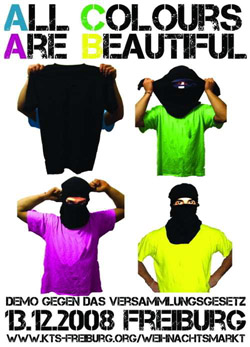 A note on caution and paranoia:

It will be suggested that the threat of surveillance we outline here is exaggerated and paranoid. So we thought it necessary to clarify our stance. We choose to prepare for the worst case scenario. We accept that, for instance, the chance of the police both bothering to, and being able to obtain CCTV from third parties in the event of most “public order” situations is low. However, we believe to prepare for the fact that they may is cautious. We would be paranoid if our fears stopped us from acting, but careless if we did not let our fear inform us to prepare.

This has been a long time coming for us to write. Over the past few years we have seen an huge increase in police surveillance at demos. This has taken many forms:
Forward Intelligence Teams (FIT) -
The FIT was formed in the early 1990's. Its purpose is to film, photograph and watch us whilst in plain sight, wearing blue and yellow fluorescent jackets. Their aim is to intimidate us.
The FIT have been highly effectively combated at demos by the tactics developed by FITwatch, please see www.fitwatch.blogspot.com if you haven't already and join their fantastic work.

Evidence Gathering Teams (EGT)
Similar to FIT, the EGT film demonstrations and in effect have the same job, only they don't belong to the FIT unit. Similarly annoying and obnoxious, and as well targeted by FITwatch.

Drones
Right, now this sounds really paranoid, and we would say it was, had it not happened recently (at the anti-bnp demonstrations against the red, white and blue festival last year), but the police may use unmanned drones to film demonstrations from the air. These may be nullified on demonstrations in the same way any police surveillance can, through proper clothing and masking up.

Helmet Cameras
These are cameras attached to the side of cops' heads and look like small cylinders. Some may have sound recording. Fortunately, they are new and expensive, but are becoming slowly more common. In reports on the death of Ian Tomlinson and the G20 protests, senior police officers concluded that this was a more suitable surveillance tactic to FIT teams. This is because, though we may see the cameras, the “general public” will not, thus making the state look less authoritarian.
Again, mask up.


CCTV
Is supposedly everywhere in city centres where demonstrations tend to
take place, but it isn't as common as they want you to think. Be wary, and look around before masking up and unmasking, but it shouldn't be hard to get out of the gaze of the cameras. Most commercial CCTV only points down to the doors of the shops it is there to protect.
Recently, police have been equipped with portable CCTV robots that climb lamp posts and can be deployed on the routes of demonstrations.
We should remind everyone that these are very expensive pieces of equipment. They are also no more effective than any other tactic if we protect our anonymity well.

We must be honest, we have not adapted to the increase in surveillance well. Our ideas of anonymity are still caught ten years ago, from the black blocks of Seattle and the summit protests. We need to accept that now we cannot simply get away with wear darkish clothing and half covering our faces. While that may make you hard to pick out of an identity parade by an individual officer, to positively identify you for your file, and is pretty effective against standard old grainy CCTV, it is not a match for modern surveillance. By trawling through hours of high definition footage, police have picked out people before and then long after they lifted a mask over their face, and proved it in court by pointing to distinguishing clothing, piercings, tattoo's or hair. They have pointed to people in the corner of shots, or half in shots, and identified them from their other footage.
Police have also used footage to arrest and raid houses months after demonstrations. We do not wish to create fear or paranoia, but it is important not to underestimate the sometimes unbelievably tedious lengths cops will go in the attempt to secure protester convictions. Yet all this can be easily combated simply by masking up well.

So, why mask up on demos?

The first and most obvious reason why we should wear masks on demos is to protect ourselves from the ever watchful eyes of the surveillance state. The police and intelligence services are using an increasing variety of methods to document and gather evidence at protests. By effectively masking up you avoid being caught on police evidence gathering footage and/or CCTV and can dodge having further information on yourself being put on the police protester database (

http://www.guardian.co.uk/uk/2009/mar/06/police-surveillance-protesters-journalists-climate-kingsnorth). It does not matter if what you do is entirely peaceful, the police will still attempt to identify you, create a file and if possible prosecute you. Even the most law-abiding protesters have been the target of police investigation and prosecutions. If you are going to participate in direct action or confrontation with the cops then be especially aware that police will be pouring over video/photo footage of the event afterwards and will seek to pin-point known activists and recognisable faces. It is not advisable to engage in these activities without first masking up properly.


Secondly, even if you do not plan on participating in direct action or confrontation masking up allows you to give solidarity to those who do by hiding them within our ranks. It is much harder for the cops to identify and isolate masked up activists if they are part of a larger masked block or one of many similar dressed people.

A note of caution: It is often claimed by activists and liberals who are opposed to masking up that if you are proud of what you do you should not be afraid to show your face. Don’t listen to them. Be proud of what you are doing but mask up to avoid the inconvenience of getting nicked. The system does not reward our pride.

Masking up to avoid police surveillance properly involves more than simply wrapping a scarf or bandanna around your face. Effective masking up means consideration must be given to how you are dressed as well. Ideally we would all dress the same and mask up in the same way. However, where there is not a consensus on clothing it may be good to dress identically to your affinity group to at least make it a little bit harder. Here we will provide you with some tips but it is by no means the bible on masking up and the best advice is to just use your common sense and ingenuity.

Head and face: This is by far the easiest part of your body to be identified by and must be properly covered. People have been identified by the police on the basis of the cops recognising their hair and even their distinctive brow. The best advice is to make sure that no part of your head is showing; a hat pulled low with a scarf and a pair of sunglasses works well to cover most of your face. Remember that you need to stay masked at all times when police are filming. Try not to pull your mask right down if you need to eat or have a cigarette as that is an easy time to get snapped. Alternatively you can wrap a t-shirt round your head to give you the ninja-protester look (see image). When a section 60 A (A) order is being implemented and masking up not possible then wearing your hood up with a baseball cap pulled low and a pair of sunglasses helps to obscure most of your face especially from mounted cameras. It is paramount that you cover your hair!!!

Body: Cover all piercings/tattoos/scars that you can be identified by. Wear simple plain clothing all of one colour (it doesn’t have to be black!) and if a demo has called for a colour scheme then stick to it. Do not wear clothes with any visible distinctions that can be noted and used to identify you later. Wear an alternative coloured t-shirt and carry a different coloured jumped in your bag in case you need to quickly look like you’re not that person from just before who was masked up. Ideally, protester looking trousers (such as black combats) are not the best idea, unless suggested that all on the demo wear them, as they make disappearing away into a crowd once de-masked harder.

Shoes: Again, another way a lot of people get identified and pulled out of a crowd. Wear plain shoes with no visible markings on them and if you are wearing black, make sure they are black! Boots are good, but may create the same problems with de-masking as black combats. Undercover cops may often be identified by their shoes, let us not fall into the same trap.

Masking Up/De-masking: A classic mistake made is to mask up/de-mask at the wrong times. De-masking whilst still in a crowd is a good idea if you have just done something you would not like to be caught for as long as you do not keep wearing other bits of clothes you can be identified by. After an action it is important to not de-mask in an area where there are cops or CCTV you can be identified by.

For more info on masking and riot situations read