Cuban Medical Brigade, Refused by Bush During Katrina, Treated Over 1,000 Haitians in 24 Hours, Including Dozens of Life-Saving Surgeries .... Cuban doctor with a Haitian man who is a recent graduate of Cuba’s Latin American School of Medicine providing much needed treatment to the people of Haiti. 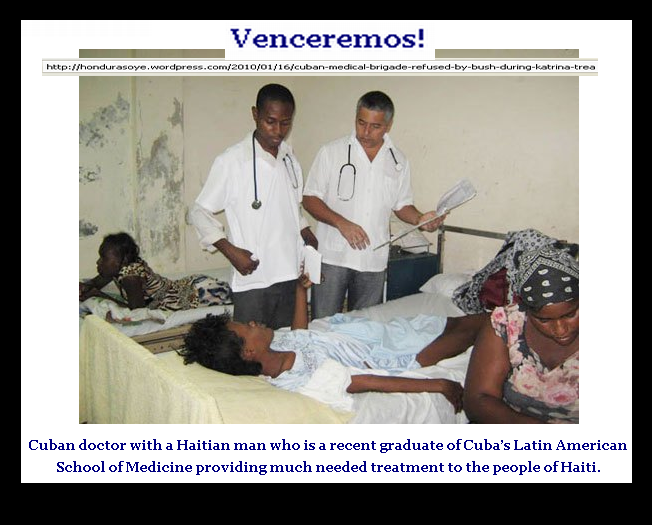 Despite repeated aftershocks following the 7.2 earthquake that shook Haiti on Tuesday, a 60-member relief team of Cuban healthcare professionals is already providing medical assistance in that country.
The team is part of the Henry Reeve emergency medical brigade, a contingent of Cuban doctors specializing in disaster situations and epidemics created by Fidel Castro to bring professional assistance to peoples in need in any corner of the world.
In a catastrophe report published by the Cubadebate website, Cuban radio correspondent Isidro Fardales reports that this group of specialists brings the total number of Cuban doctors working in Haiti to 300, many of whom were sent to Puerto Principe in the aftermath of the earthquake.
Upon arriving in Haiti, Fardales reports the following, “We arrived at a field hospital located in the central courtyard of a place Haitians call the El Anexo, a facility within the Military Hospital facilities.
“There, under a big tent, Cuban surgeons tirelessly treat every patient that comes in, injured or mutilated; although the line of people waiting for assistance seems to stretch on forever.
“As I write this, our medical staff has already treated more than a thousand patients in little more than 24 hours, and dozens of them have undergone emergency life-saving surgery.
“Another field hospital has been set up in the Renacimiento Ophthalmology Center, the hospital that used to house the Milagros mission [Cuban-Venezuelan Free Eye-Surgery Program] in Haiti.”
According to other reports, a medical team headed by anaesthesiologist Humberto Perez —one of the members of the relief team who arrived in Haiti on Wednesday— brought the three Cubans that were injured in the catastrophe back to the island. Cuban university student, Joel Melo Torres, who suffered serious physical injury, has been undergoing specialized care since Thursday at the intensive care unit of the Juan Bruno Zayas Hospital in Santiago de Cuba; while Alina Almeida Figueroa, from the westernmost province of Pinar del Rio; and Adalberto Bravo Carbonell, from Sancti Spiritus, escaped with minor injuries. .... MORE: