1 year inside without trial for smashing edo

Elijah Smith is still in jail 1 year on from his part in the decommissioning of the EDO/MBM/ITT factory in Brighton. EDO make parts for the weapons used by the Israeli army to bomb civilians in Gaza. Nobody was injured or harassed during their action, which was one of damage to property only. Elijah and his co-defendants did not resist arrest. 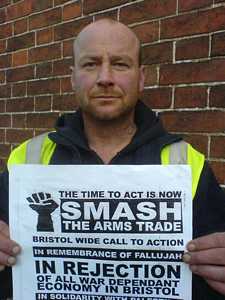 Matters are looking worse and worse for former British soldier Elijah who is still on remand after one year in gaol.

Yes that’s right – one year in prison without trial.

After the decommissioning case he will have another trial in September as his trial for the occupation of the Raytheon roof in Frenchay business Park is scheduled for September 2nd at Bristol crown court.

His trial for witness intimidation resulting from a minor comment made in court to EDO/MBM/ITT Managing Director Paul Hills is set to take place in August.

We believe that the witness intimidation charge is a malicious act by the state designed to keep Elijah in prison without trial for as long as possible so we are calling for his immediate release.

The committal hearing for the Raytheon roof was at the beginning of December 2009 and the trial is not likely to be that lengthy so why September?

There is no excuse for his continued incarceration as Elijah has an acceptable bail address and people who will stand surety for him.