Council does the dirty on the Save Victoria Bath Campaign

Nottingham City Council is trying to close Victoria Leisure Centre on 31 March 2010, despite having no approved plans for development and no planning permission to demolish what is already there. If they succeed, the current Leisure Centre will be lost forever and the local community will have nowhere to go.

The Council must be persuaded to change their mind! 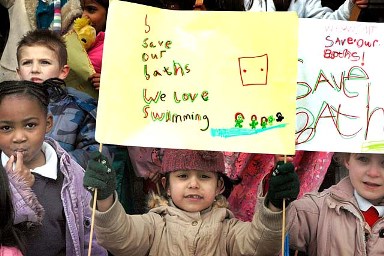 At a carefully stage-managed meeting in April 2009 the St Anns and Dales Councillors voted to recommend demolishing Victoria Leisure Centre and rebuild it as a smaller facility. At the meeting, no evidence was presented that this was what the majority of local people wanted. Tellingly, at the Council meeting where the vote was taken by full Council to demolish the Baths, the concerns of local people and the Campaign didn’t even feature in the 12 page report into land development around the Leisure Centre.

Previously the The Council had not released any information about the development but had apparently handed over development of the planned new building to private contractor, Carillon. But according to a newsletter from Amber Valley Council, new pools currently being built for them by Carillion have been delayed by construction difficulties since 2006! Carrillon currently run East Leake Leisure Centre (built in the same way) which, according to this article is now facing closure only 5 years after being opened because the local council can’t afford to pay Carillon the extra £285,000 it is asking for annual running costs.

Now it seems like a new pool may never be built. This could of course have been the plan all along. In spite of a campaign to save Northern Baths on the other side of the city in the 1990s alongside council promises for a leisure complex on the Forest that noone wanted, nothing else happened except the closure. Noel Street still hangs on but is continually threatened.

Getting rid of Victoria Baths will no doubt go hand in hand with the Eastside development, the City Council's big project to 'regenerate' the area close to Sneinton and the city centre side of St Ann's. How many more flats, shops and commericial spaces can they plan to build? What about neighbourhood leisure facilities that are affordable and close to where we live? It is already known that school swimming time is seriously affected by the need to bus children out to other pools, once local pools are closed.