On the first anniversary of the end of the Israeli war against Gaza, Smash EDO activists in Brighton organised a demonstration against arms manufacturer EDO MBM/ITT who made some of the weapons that killed 1417 Palestinians, mainly the elderly, women and children, during the three-week assault. Pictures Copyright (C) Peter Marshall, 2010, all rights reserved 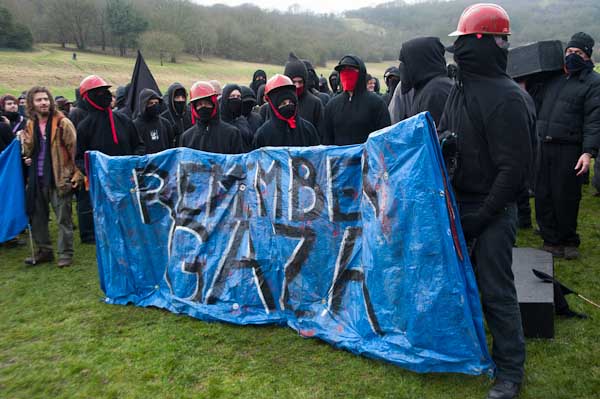 Ready to start the march 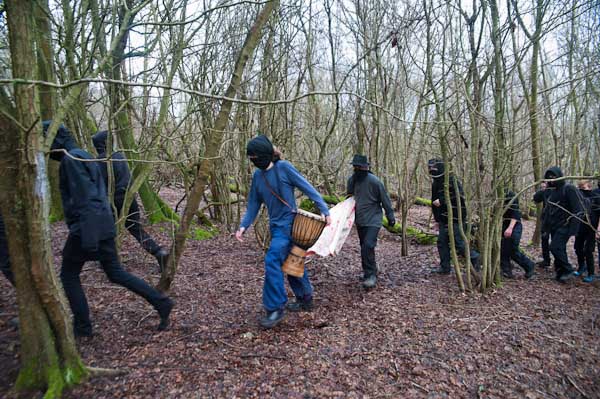 Filing through the woods 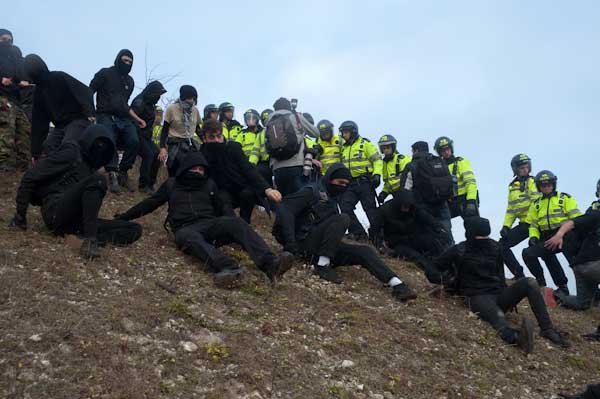 Sliding down the slope next to EDO 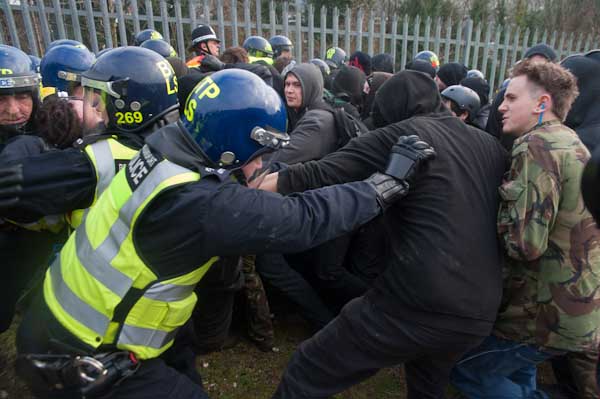 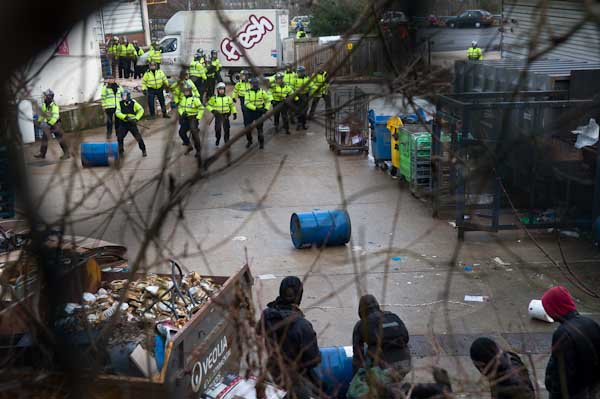 Inside the EDO site 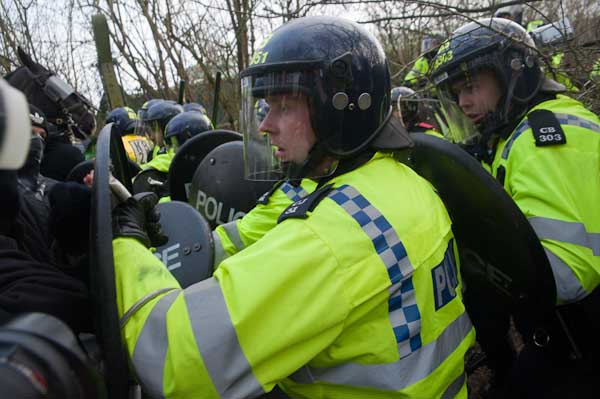 Police push on the footpath behind EDO 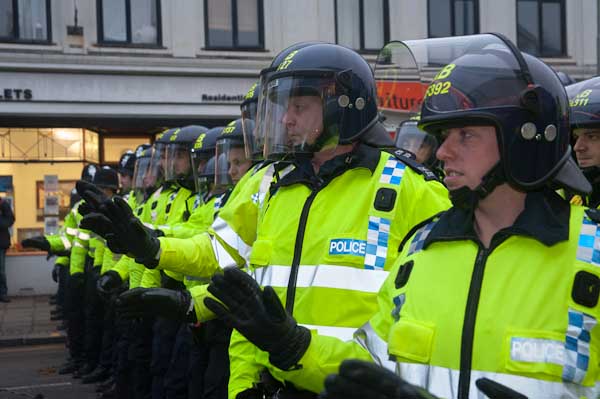 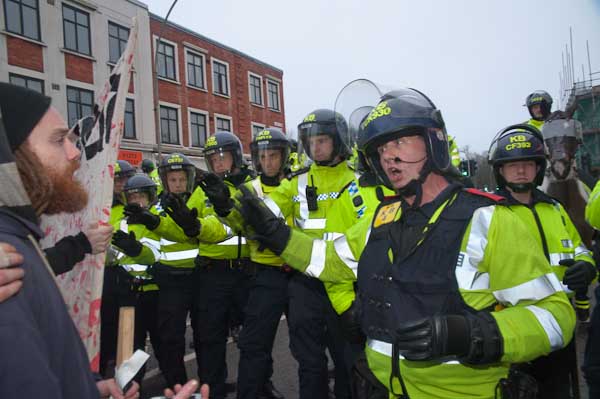 Section 14 - you can't come into Brighton

Around three hundred demonstrators mainly dressed in black as the organisers suggested, assembled at 1pm in Moulscoomb Wild Park, a short walk from the EDO factory. They intended to march up Home Farm Road for a demonstration outside the factory. Demonstrators had been advised by the organisers to wear masks at all times during the event as both police and press would be taking photographs.

Police watched the build-up, with four mounted police and several officers on foot on a ridge overlooking the meeting point, and others in the area around. A couple of officers attempted to hand out 'Section 14' notices under the Public Order Act, but few took one. These orders allow police to impose conditions on demonstrations "to prevent serious public disorder, serious criminal damage or serious disruption to the life of the community" and they may set limits on the location, duration and number of people allowed to take part.

Eventually the march moved off towards the EDO arms factory, but when the reached the bottom of Home Farm Road they could see that there was a large police presence blocking their intended route to prevent them demonstrating outside the factory.

Most of the people on the march decided to run up the hill and into the woods to try to reach the factory. I went with them, and as we neared the back of the factory we were met by a small group of police with dogs who warned us we would be bitten if we approached. The demonstrators turned away and walked further through the wood and across an open space where they were met by a line of police.

After a while the several hundred protesters decided to continue through the line of police; a few officers made a half-hearted attempt to stop them and were then told to allow them through, and they walked down beside a fence at the rear of the factory to a footpath leading to the far end of Home Farm Road. This meant that the factory was effectively surrounded by the demonstrators and all entrances and exits blocked.

At this point they were stopped by another line of police, this time defending a fairly narrow footpath. The demonstrators tried to push through but were repelled and then scattered when the eight mounted police rode in. They regrouped a few years back but as a number of police with riot shields arrived they decided to go back the way they had come.

Halfway up the path at the back of the factory, people realised it was possible to lift up the bottom of the wire fence and scramble under the bottom of it into the factory site. I decided not to follow them and could only photograph through a wire fence and some branches. Around 20 had made their way through when police came to meet them with batons drawn. The protesters rolled a few oil drums down towards them, but once police with dogs arrived they quickly scrambled back under the fence onto the path.

By this time the police horses and riot police had followed the protesters up the hill and there was a little shoving and fighting with at least one protester needing attention from the protest medics after having a baton blow. After a while the protesters were forced to move on and up to the top of the hill, where the police formed a line to stop them going down again.

After a few minutes standing around, the protesters moved away and down through the woods to join the smaller group of demonstrators and the sound system who had waited at the bottom of Home Farm Road.

The protest then set out to march back to Brighton. About a quarter of a mile down the road the police attempted to block off the road and stop the march outside Brighton University, but people found a way around the police line through a car park. The police repeated the attempt to stop the marchers a number of times but without a great deal of success. At one point the police announced that they were only stopping the march because there had been an accident down the road that needed emergency vehicles to attend, and the marchers did stop for a while.

As we got close to the centre of Brighton and the street was narrower the police again stopped the march. The officer in charge said that he was not going to allow them to continue to march through the city and disrupt shoppers and people going home from work, and was imposing a Section 14 order to prevent the marchers going beyond The Level, a nearby open space, where they could stay for as long as they wished.

Eventually the police withdrew towards The Level, and the marchers then rushed past them and the march continued across the centre of The Level and on into town.

At this point I had to leave to catch a train home, and as I walked past on my way to the station cordons of police appeared around KFC and McDonalds. Later I heard these was a demonstration at a Barclays Bank and partying in the streets, and four or five arrests were made, mainly for breaching the Section 14 Order.

This story with a few more pictures on Demotix:

More pictures from the event on My London Diary shortly.