Fascist pub The Gloucester Arms at 59 - 61 Leighton Road has been the centre of protests from anti racists following the decision by landlord John Coyne to let hardline neo nazis, the Jobbik Party hold meetings in the pub. The Jobbik Party are part of a European Alliance of Nationalist Movements drafted by the BNPs Nick Griffin. During the past 24 hrs most of the pubs windows have been shot out. 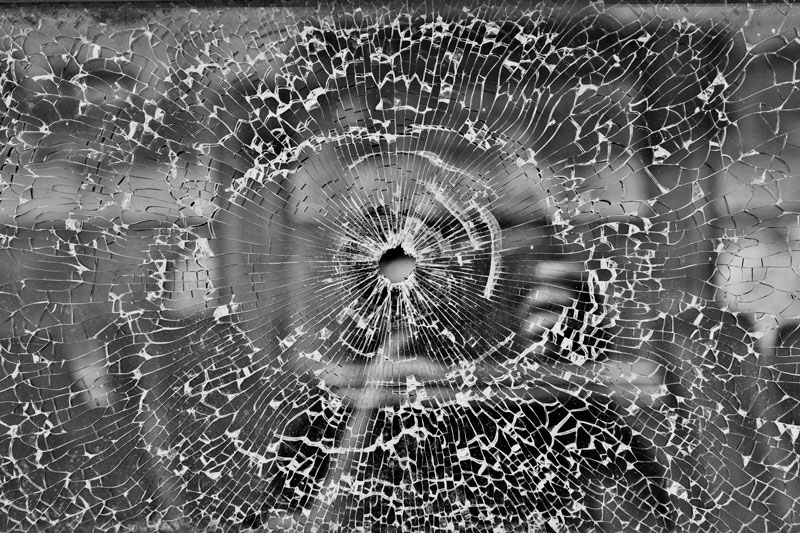 The majority of the pubs windows, including the window to the bedroom used by John Coyne and his wife have been shot out.
The pub walls have been daubed with "Close BNP Pub", anti racist lealfets have been sellotaped to the pub and an Irish Triclor flag has been draped across the pub. [A very large pair of knickers and an outsize pair of bloomers were draped across the other side...]
The anti racist campaign began when anti fascists learned that the pub was ameeting place for organised racists. A protest was called by Camden Anarchists against the pub.
During the meeting held by the Jobbik Party, the landlord of the Gloucester Arms John Coyne came out and told the Camden New Journal and anti racist protesters to "go whistle". He also told the Camden New journal that the neighbours were "all a bunch of swearing tossers and they're all barred anyway".
He said that when he first bought the pub he barred over 70 people. The CNJ interviewed Coyne in the empty pub while the fascists, mostly in sunglasses and bouncer style black bomber jackets sat in a circle having a meeting in the back room.
The pub and the occupents have become the centre of a simmering feud between the pub and neighbours some of whom share an adjoining wall to the pub which hasn't been soundproofed for the level of noise generated. They have complained that children have been let into the pub where Coyne watches hardcore porn in the bar on the pub TV.

Residents have called for a week of action and have asked that people contact Camden Council and ask that the pub license [held by Trust Inns LTD] be revoked.
Camden Council
Camden Town Hall
Judd Street
Camden
WC1

Camden United Against Fascism are holding a meeting next week, Tuesday 26th January at 7pm, 99 Torriano Avenue, Kentish Town Camden NW5 to discuss how best to keep nazis off of Camden's streets and to adddress the problem posed by the pub. We ask that anti fascists turn out in force for this as the situation is a serious one.