Here are some pics from the protest by migrants in Calais earlier in the week, and our press release which sheds a bit more light on the events.... 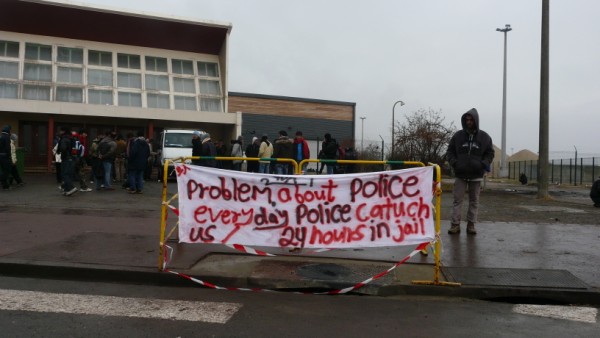 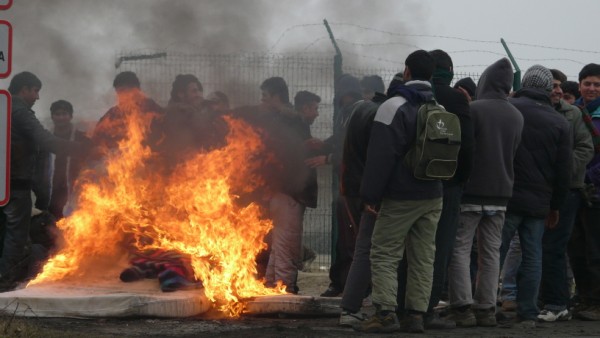 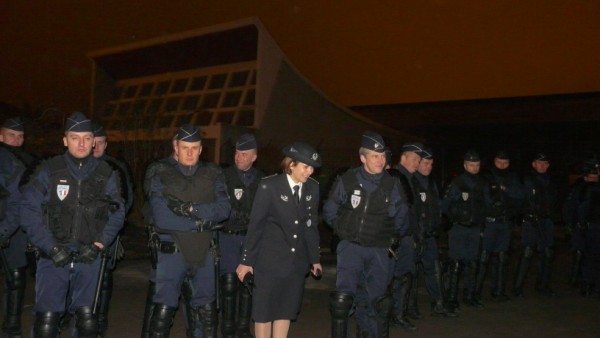 - Officers declare orders to destroy all migrant shelters in the area

- Escalation in repressive tactics leave migrants with nowhere to go

In a rare show of defiance, around 100 migrants camped around a gym which
had been used by local charities to provide urgently needed night
shelter over the harshest weeks of winter, before its closure on Tuesday
[1]. The migrants, primarily from war-torn Afghanistan, also burned some
blankets and banners in opposition to the closure, which comes on the
back of the repeated eviction of migrants from their camps.
Within half an hour, scores of police officers descended on the site
threatening to destroy the makeshift camp on failure to disperse.
Following a stand off, the migrants were permitted to leave the area, but
were closely pursued as they searched for alternative sites to shelter.

Having actually been advised by some police officers to do so, some men
set up shelters on the site of one of the former camps, or 'jungles', and
were given assurances that the police would not attack.
But within hours, the officers had entered the camp several times,
arresting six people, in what has now become a daily routine of arresting
those without identity documents in Calais in an attempt to flush them
out of the area [2].
By midday on Wednesday, 20 CRS (riot police) vehicles had surrounded the
new camp, and anything resembling a shelter was destroyed.

Following a relentless routine of police pursuit, arrest and assault this
winter, the migrants returned in desperation to the closed night shelter
and installed some of the tents that had been discarded by the
authorities following the eviction that morning. The police promptly
arrived at the scene, announced that they had orders to disperse
assemblies and destroy shelters, before seizing the remaining tents.

Throughout the night, the hunt continued as migrants were followed by
groups of police, who pre-emptively destroyed any half-erected structures
they found.

“The police were quite literally swarming everywhere last night. They were
pursuing migrants in case they dare set up shelter, or following any
activists who might assist them,” said Joanne, a British activist from the
No Borders network who is present at the scene [3].

“This is all part of a carefully planned strategy by the French and
British governments to drive the migrants away from the area. But when you
think that many of these people are coming from conflict zones like
Helmand province, where else are they expected to go?” Joanne continued.

Alex has been involved in documenting - and directly intervening in - the
police harassment in Calais for some time. “As shocking as it is, we find
that the presence of European citizens during police raids can make a real
difference, because the arrests are so arbitrary. It shows that ordinary
people do have the power to help migrants defeat this enormous show of
force by our governments. I really think that resistance from the
migrants themselves and support from ordinary people is the only hope we
have of stopping this horrendous repression.”

[1] The night shelter opened on 15th December, and was intended to provide
sleeping space for around 150 of the approximately 300 migrants in the
town of Calais over an exceptionally cold few weeks

[2] For a summary of police activities in December, please see our report
here:

[3] The No Borders Network uses direct action and practical solidarity to
fight for freedom of movement for all. They form part of the Calais
Migrant Solidarity group which has maintained a continued presence in
Calais since the early summer