Hardcore Nazis of the EDL

The "peace-loving, tree-hugging non-violent non-Nazis" of the EDL (as they would have us believe) poured into Stoke today intent upon chanting racist slogans, making Nazi salutes and wreaking havoc upon another British town centre. 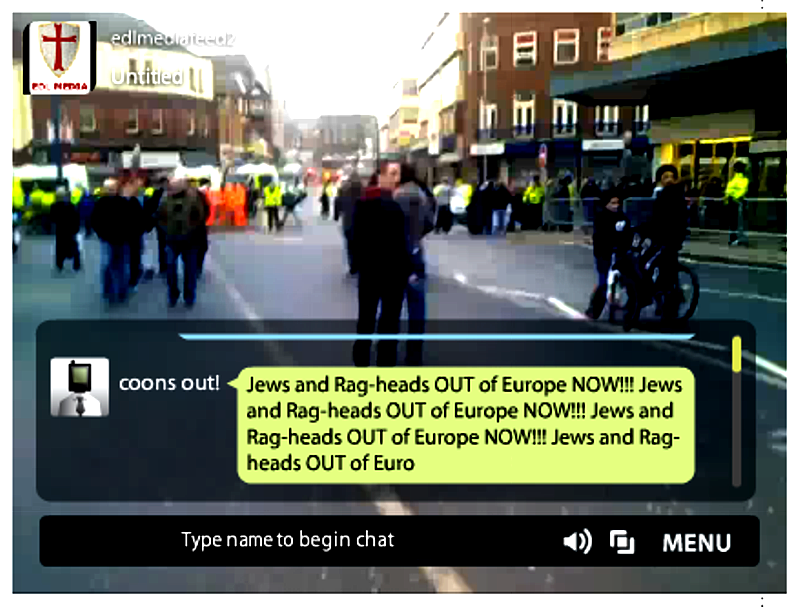 In a city where BNP councillors make up the political microclimate, and football hooligans veer towards the far right, the neo-Nazi thugs of the EDL attended in larger numbers than expected, and anti-racist demonstrators were down on turnouts in Manchester, Leeds and Nottingham.

Christian, Muslim, Jewish and Sikh faith leaders signed a pledge against all forms of racism, ahead of the event on Saturday, and there was an antiracist rally where resiliant locals dodged the Redwatch cameras to make there opposition to organised racial hatred known, but given the historical significance of this part of the Midlands, when Oswald Mosley chose to march through the very same place, many anti-fascist individuals felt intimidated to stand up to be counted. Those people who did join the meaningful anti-fascist protest however, were a broad cross-section of society, unlike the monocultural biggoted Islamophobes of the EDL.

Before every "anti-extremist demo" as the far right EDL like to cleverly brand their racist gatherings for the benefit of the press, deceitful public relations supremo and Portsmouth supporter Trevor KKKelway puts out public declarations to his own supporters to "behave nicely", knowing full well that his street army of hardened soccer hooligans, (for all of their anti-immigrant racism, setting up Facebook groups calling for the expulsion of Non-English speakers from hallowed shores of England), their (almost) totally white membership do not understand English.

Dogs bark, cows moo, cuckoos cuckoo, and brainless football hooligans scuffle and fight. The Police described the UAF protestors as being no-problem, however when the Wetherspoons bevvies had worked their way into the bloodstreams of the EDL thugs, they "turned native", chucking missiles at riot police, attempting to fatally crush policemen and women to death by attepting to turn over a police van, (see the BBC video

So much once again for the lies and spin of the EDL. When will the media stop being "political correct" about the EDL and stop calling a violent drunken gang of English nationalist racist football hooligans "anti-extremist protestors" with pussyfooting regularity. It's time that the media come clean about the hatred and violence of the EDL.

If anarchists such as G20 protestors had clashed with the police in such a way, trying to turn over police vehicles, attempting to cause grevious bodily harm to police officers, World War III would have erupted in the Sun, Daily Mail and the Daily Express, with gargantuous full-font headlines along the lines of "Lawless Anarchy Wrecks City", but when the aggressors are the violent Islamophobic EDL,media reports are predictability muted, which does little to quell rumours that the neo-Nazi organisation are part of a contrived state conspiracy to shore up the War On Terror, and maintain support for the War In Afganistan.

Several people have commented about the EDL's plans to become a political organisation to take over from the BNP after Old Nick finally pulls the plug from under his comrades feet and switches the lights off. Masquerading as a charity, working in conjunction with the BNP's Soldiers Off The Street charity, the EDL held unlicensed collections of cash for war victims, as the EDL hope to do what the BNP failed to do, infiltrate the British Army.

Politicisation of the British Armed Services sets a dangerous precedent, and the stupid actions of the EDL actually endangers the lives of British soldiers, as as well as fighting Taliban forces across the hills and valleys, they also work with Muslim villagers in matters of security, protecting villagers from violent Tabliban insurgencies. If British forces were to be infiltrated with the institutional racism of the EDL, and racist Muslim-hating bigots become commonplace in our armies fighting in Afganistan, the British Army would be labelled a Crusade.

The crusading theme continually recurs in EDL mythology. The sham "nationalism" of the EDL is a whimsical excuse for old-fashioned racial and religious prejudice, xenophobia and mass ignorance, and contrary to their parroted protestations, the EDL are happy to accomodate their hardcore nazi element. Wigan Mike is the mere tip of the Iceberg.

Attracting national socialists like flies to a fetid dungheap, the crude ignorant loathings of this dispicable far right organisation attract no end of racist nutters to their organisation, a fact self-evident from a random surf of not just the uncensored wastelands of Facebook, nor YouTube, but the EDL's very own "live outside broadcast channel".

Take a look at the screenshot taken from "EDL Media", as they so-slickly call their hate-driven moby phone broadcasts.