Germany: Repression against anti-fascists goes on... 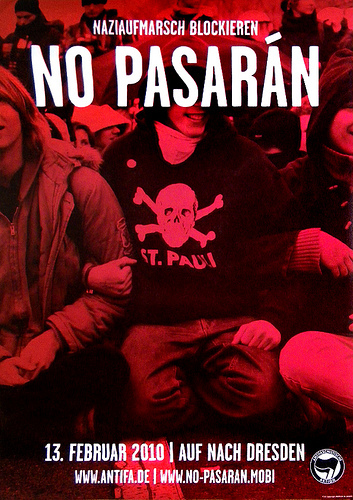 In the past week, the German police raided two places in Berlin and Dresden in search of posters for mobilisations against the world's biggest neonazi march in Dresden on February 13th with expectedly 7000 nazis from all over Europe. The prosecutors say appeals to block that march violate the law and are therefore illegal. All materials for the mobilisation they could find have been confiscated. Left politicians that pasted posters to protest against the police justice have been arrested. The mobilisation homepage dresden-nazifrei.de has been blocked which is in accordance with censorship in Iran and China.
It looks like Germany did not learn from history. In the shadow of democracy thousands of nazis may march on February 13th, which will be protected by more than 4000 police officers. The state of Saxony, which is ruled by a coalition of the conservative „Christian Democratic Union“ and the „Liberal Democratic Party“ made up a law who was to forbid both nazi and antifascist protests. While this law is likely to be rejected by the Constitutional Court and also contains vulnerabilitiesthat make it tough to use it to forbid the neonazi march, the state repression against the antifascist goes on. The State Institutions alienate law to their own purposes, most their action are likely to be declared illegal in hindsight.
Antifascist groups call upon all forces to come to Dresden in order to block the march. The bombing of Dresden 1945 was not an act of terrorism, but legitimate action in wartime, and may not be used for their purposes to spread hatred and their national-socialist ideology.

Talking is over – no place to hide for fascists, revisionists and nazis!