Last night members and supporters of No Borders Brighton and London No Borders picketed the Crawley Borough Council planning meeting where an application by Arora International Hotels Ltd. to covert the Mercure Hotel into a detention centre was rejected by the Development Control Committee. 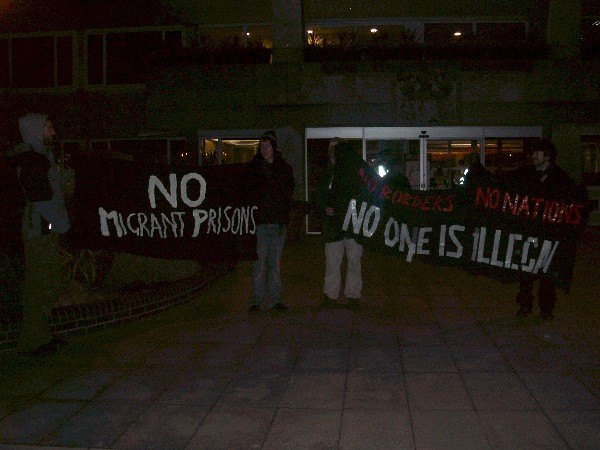 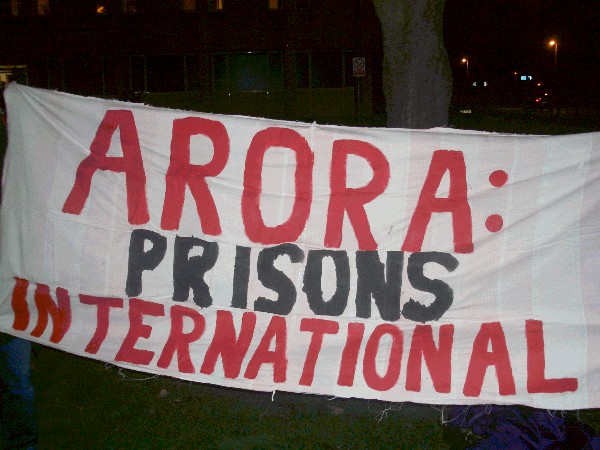 During the meeting, apart from the council planning officers, only two people spoke in favour of the application - the applicant himself, Tim Jurdon, Head of Planning Arora Management Services Ltd., and Surinder Arora, sole owner of the Arora hotels chain. Those that spoke against it included a representatives of 11 of the 12 nearest residential houses to the hotel, a neighbouring hotel, a Reigate and Banstead councillor and Bill MacKeith representing the Close Campsfield campaign and SERTUC.

Members of the planning committee itself spoke out almost universally against their own planning officers recommendations, placing special focus on their interpretation and claimed misrepresentation of the wording of GAT4 in the Crawley Borough Local Plan 2000. This states, "planning permission will not be granted within the airport boundary which is not CLEARLY required for operational, functional, safety or security reasons." [our emphasis - see footnote [4] for explanation]

Unfortunately, the planning meeting also revealed the general level of ignorance of the role and function of Immigration Removal Centres (IRCs), even amongst supposedly informed elected representatives. The function of IRCs is not solely, or even largely, that of holding of so-called 'failed' asylum seekers prior to removal, it is the 'administrative detention' of people within the asylum process and those prior to removal. Each year hundreds of people pass through IRCs that are eventually granted leave to remain in the UK.

Additionally, nothing was made of the objection by Sussex Police, which stated that only 13% of detainee removals from Tinsley and Brook Houses, the 2 existing Crawley detention centres, had been via Gatwick Airport itself. As Tinsley and Brook Houses only represent approximately 18% of the UK detention estate, Gatwick can hardly be considered an immigration removal hub and any additional development would have required significant additional vehicle movements from Crawley to Stanstead and Heathrow, the 2 main airports used for deportation flights, contrary to local authority sustainability commitments.

[1] The planning application and relevant details can be found at:

http://tinyurl.com/AroraApp
[2] Established in 1999, Arora International Hotels is one of the UK's fastest growing privately owned hotel companies, with six luxury hotels in and around Heathrow and Gatwick airports and one in Manchester city centre. For details of the Mercure, see:

http://www.mercure.com/gb/hotel-7059-mercure-london-gatwick-airport/index.shtml
[3] For more background on the application, see:

http://www.corporatewatch.org/?lid=3432
[4] As represented in point 4.6 of the report [No. RS. 13] drawn up for the Development Control Meeting, the councils planning officers appeared to have miss represented the text of the Crawley Borough Local Plan 2000 by stating: "Policy GAT4 states that planning permission will not be granted within the airport boundary which is not required for operational, functional, safety or security reasons", leaving out the word 'clearly'.
[5] No Borders Brighton had lobbied all 37 Crawley councillors with a signed statement in opposition to the development, based on the health effects on detainee children, that was endorsed by Dr Caroline Lucas Green Party MEP for SE England, Ben Duncan Brighton and Hove City Councillor and a Green Party parliamentary candidate & the South East Region TUC amongst others. See: