A group of nine anti-nuclear campaigners staged a two-hour protest outside the Nuclear New Build Conference in central London this morning in protest at industry attempts to paint nuclear power as a “green” technology and win public support for new nuclear reactors. 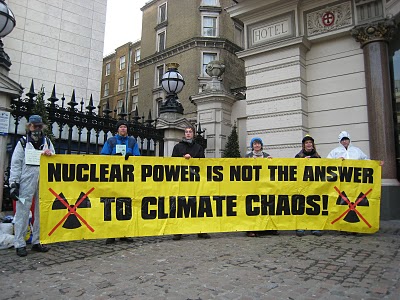 Standing outside the Guoman Hotel adjacent to Charing Cross railway station in the morning rush hour dressed in white overalls and masks, the protesters displayed a large banner reading “Nuclear Power is Not the Answer to Climate Chaos”, handed out leaflets and detailed briefings explaining why they believe nuclear power to be a false solution to climate change and detailing other problems with this form of energy. During the demonstration, the conference's keynote speaker, former energy minister Malcolm Wicks MP, exchanged views on nuclear power and energy policy with one of the campaigners.

The Department of Energy and Climate Change is currently undertaking a public consultation on its draft nuclear National Policy Statement (NPS). Once this is approved, decisions on new nuclear reactors will be left to an unelected quango called the Infrastructure Planning Commission, with no further opportunity for local objections to be heard.
The Government is keen to push through a new generation of costly and highly controversial nuclear reactors, despite widespread opposition and the lack of any long-term solution for over 50 years' worth of high level radioactive waste from existing reactors. Campaigners are concerned that the high cost of building new reactors would divert essential investment from renewable and decentralised energy and energy efficiency measures. They say that new reactors take too long to build and would not in any case make a significant contribution towards meeting the UK’s carbon emission reduction targets. They also remain concerned about the health effects of radioactive emissions, such as the cancer and leukaemia clusters found near nuclear power stations, as indicated by the 2007 German-government sponsored KiKK study, and the risk of a terrorist attack or catastrophic Chernobyl-type reactor meltdown. A former director of the Forsmark nuclear plant in Sweden said of an incident at the site in 2006: "It was pure luck that there was not a meltdown."

Daniel Viesnik, 35, a London-based activist, said “The nuclear industry’s long history of secrecy, cover-ups and shoddy and dangerous practices stretches back over fifty years. It wants us to believe that a leopard can change its spots, but the only thing that really seems to change is the industry's PR tactics.”

Ian Mills, 44, a long-term anti-nuclear activist from Chippenham, Wiltshire said, “Nuclear power is a dirty, dangerous and expensive distraction from the major investment needed for a radical transition to a safe and sustainable low-carbon future and green industry, based on more modest consumption, energy efficiency and conservation, and renewable and decentralised energy.”

Mell Harrison, 38, Eastern Region CND's campaigns officer, who lives near Sizewell nuclear power station in Suffolk, said: "It is frustrating that we are not included in the talks happening at the conference, especially as the energy needs of the UK concerns us all. A seat at the conference costs over £1300 and the future costs if new nuclear goes ahead are far greater. Surely now it is time for the nuclear industry to be open and accountable? But yet again as we have seen time and time again, all the 'real' talk goes on behind closed doors.' Mell added ' This protest is just the start- we need real solutions to climate change - not nuclear green wash.'