Mossadegh and Ahmadinejad: Iran faces almost the same dilemma as 1953

There is a stark similarity between some aspects of the political atmosphere dominant over Iran today and those under Prime Minister Mohammad Mossadegh right before the U.S.-led coup of 1953 that resulted in the overthrow of the legitimate government of Iran and the establishment of a U.S.-puppet government of the Shah. 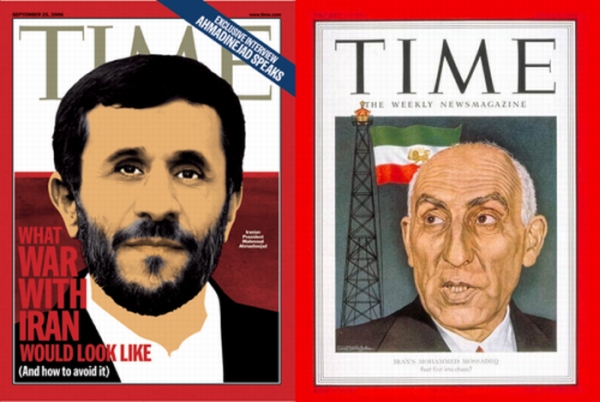 There is a stark similarity between some aspects of the political atmosphere dominant over Iran today and those under Prime Minister Mohammad Mossadegh right before the U.S.-led coup of 1953 that resulted in the overthrow of the legitimate government of Iran and the establishment of a U.S.-puppet government of the Shah. In the period between 1951-53, the U.S. in a close collaboration with the British colonial power through their channels within Iran's military and political apparatus, particularly the Shah’s court, was able to contrive division within the ruling circle and as a result the society at large.

The U.S.-U.K. sanctions of Iran's oil export at the time pursued a multitude of purposes: political instability, economic hardship, and international isolation. In the final year of Mossadegh's rule, the government was unable to pay the salaries of the civil servants in full, which had resulted in resentment towards the Prime Minister's policy of oil nationalism and his capability to rule. Secondly, Iran could not import consumer and industrial goods necessary for maintaining the normal course of economic and social reproduction. Thirdly, a layer of the ruling class whose interests were the extension of the U.S.-U.K. domination over Iran's natural resources and political system, made every effort to turn the wheels back or make the political system unmanageable. As a result, during the first eight months of 1953, Iran was in constant political turmoil and the ground was being prepared for a coup d'etat by the forces hostile to Iran’s nationalization plan, as well as to its independent direction in its domestic and foreign policies.

The U.S.-U.K. intelligence services under the covers of their diplomatic corps took advantage of the chaotic atmosphere, artfully promoted by the landed aristocracy and their spokesmen in the national congress and Mossadegh's administration. Iranian society in the early 50's was basically agrarian and hence a great majority, up to 65 percent were engaged in farming and played a miniscule role in shaping national policies. In a few large cities of Tehran, Isfahan, Tabriz, Kerman, Abadan and Shiraz, the politically active population was led by several political and ideological groupings. Among them the Tudeh Party that had organized a fraction of the workers, women and the intelligentsia under the banner of socialist ideals was a modern party merely in its infancy. The organizers of the Tudeh Party were Iranian intellectuals who were educated mainly in Western Europe, where the communist parties were strong during and after WWII, and the Soviet Union's army had effectively defeated the Nazi forces in Russia and Eastern Europe.

This party lacked experience and suffered from lack of deep understanding of the character of Iran’s social-economic development, the corresponding class forces and the necessary strategy for transition from a semi-feudal and a semi-colonial society to an independent and democratic social order. Although from the viewpoint of social justice, the Tudeh Party put the working class demands forward and achieved some successes, but in respect to the vital question of nationalization of the Iranian oil industry and the essentiality of forming a united front of working class and the national bourgeoisie which Mossadegh was the representative, the Tudeh did not seize the opportunity of uniting in time to prevent the success of the U.S. coup of 1953.

Ironically, this could be a useful lesson to be learned by all those Iranian groups today that wear the mantle of modernism and progress; however, in the recent unrest they joined the crowd whose aim was to overthrow the legitimate and democratically-elected government of President Mahmoud Ahmadinejad. Such association between pro-working class groups and counter-revolutionaries within the "Green Movement" makes some charges by the conservative elements against the "Marxists" and "Socialists" seem credible.

The second political grouping that associated itself with Dr. Mossadegh and his foreign policy was an amorphous amalgamation of individuals, tendencies and parties in a broad forum of what was known as the "National Front" of Iran. This conglomeration of loose political groupings represented mainly the interests of the merchant class that viewed the socialist movement and the Soviet Union as a "communist" neighbor with apprehension. In the camp of Mossadegh, in addition to the middle merchants, retailers, artisans, younger intellectuals and students who supported nationalization of Iran’s oil industry and hence Mossadegh's premiership against the Shah's despotism, there were big landlords, rentier strata, speculators, big businessmen, particularly in the import-export sector, and the families of the aristocracy and high echelons of clerics who hand-in-glove conspired to undermine the nationalization of oil movement.

The political organizations that made up the National Front headed by Dr. Mossadegh were: Iran party, Pan-Iranist Party of Nation of Iran, Islamic Mojahedin Party, and Toiling Masses Party of Iran. The leaders of some of the organizations served as representatives in the Iranian Parliament and spokesmen of Mossadegh’s Cabinet. In this group, representatives Shams Ghanatabadi, Abdol-ghadir Azad, Mozafar Baghaee, Hassan Imami, the leader of the House, actively opposed Dr. Mossadegh's plan for nationalization and hand-in-glove collaborated with the agents of foreign powers in undermining the national security and government stability from within the system. Before the final attack against the government of Dr. Mossadegh, on August 19, 1953, the U.S.-U.K. axis with the support of the domestic military and civil agents of foreign powers carried out several "mini-coups" that were neutralized by the great support of the Iranian people.

Today, 57 years later, Iran faces almost the same dilemma in which the imperialist forces are planning to undermine Iran's political and economic system, using the UN sanctions, while the well-to-do classes frightened by President Ahmadinejad's pro-working class and national independence policies, are engaged in activities aimed at fostering insecurity domestically and weakening Iran's position internationally. The unceremonious role of this segment of the population led partly by the "reformists", is in fact preparing the ground to enhance U.S. influence in Iran, strengthen its supremacy in the Middle East region and change the balance of forces in Central and East Asia. The leadership of this "movement" attempted to use the tenth presidential election as a stepping stone to seize state power by slandering the result of the election, in which President Ahmadinejad with 63% of the votes defeated the reformist candidate Mir-Hossein Mousavi.

But here is where similarities between Mossadegh's period and today's situation under Ahmadinejad ends and important differences begin. In sharp contrast to the liberal government of Dr. Mossadegh, President Ahmadinejad's government is an outcome of a revolution. Secondly, Iran is much more developed in comparison and the U.S. in the last 30 years has not been able to bring down Iran's social-economic system and lastly, but not the least important, the Islamic Republic's security forces are the result of the revolution and are trained, equipped and ideologically armed by the world outlook of the Islamic leaders, while the Shah's military forces were trained by the colonial and imperialist powers and were at the service of the monarchy allied with foreign interests. Finally, the economic sanctions of the West have been to some extent derailed by China and Russia that have lost their potency in undermining the Iranian economy.


* Ardeshir Ommani is an Iranian-born writer and an activist in the U.S. anti-war and anti-imperialist struggle for over 40 years, including against the Vietnam War, and now the Iraq war. During the past seven years, he has participated in the U.S. peace movement, working to promote dialogue and peace among nations and to prevent a U.S.-spurred war on Iran. He holds two Masters Degrees: one in Political Economy and another in Mathematics Education. Co-founder of the American Iranian Friendship Committee, (AIFC), he writes articles of analysis on Iran-U.S. relations, the U.S. economy and has translated articles and books from English into Farsi, the Persian language.