Bita Ghaedi is an Iranian woman who has been living in London since fleeing domestic violence in her native Iran. She has been on hunger strike for nearly two weeks and is terrified that the deportation to Iran will lead to her being returned to a country in turmoil as pro-democracy protests are now tearing at the very fabric of the Iranian clerical regime. 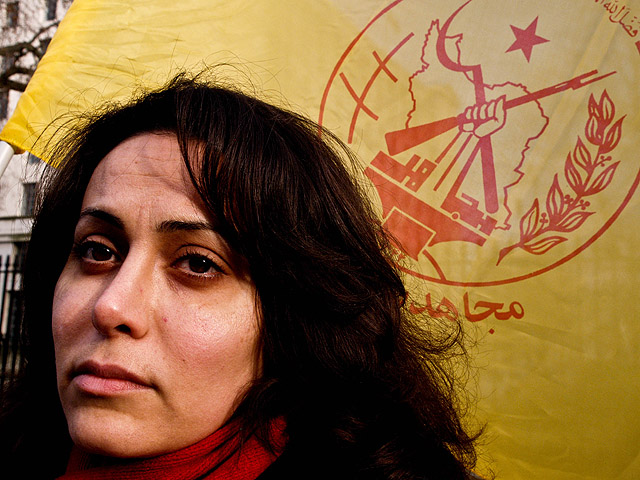 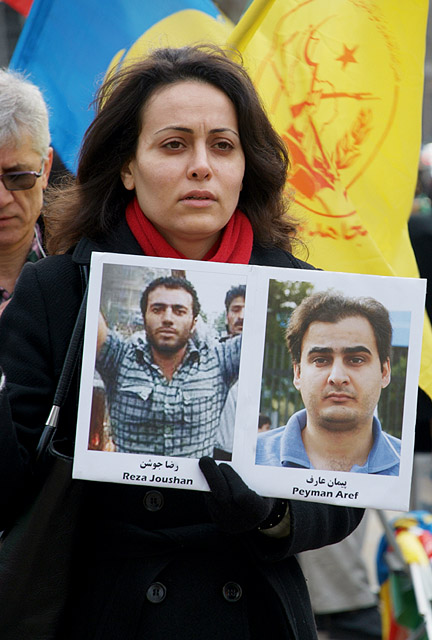 In support of Iranian pro-democracy PMOI. 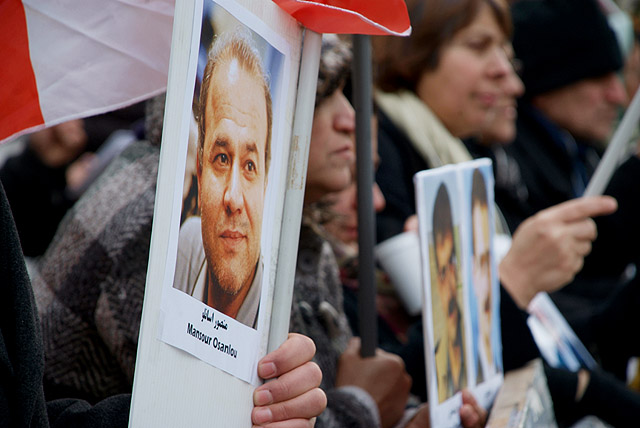 Bita Ghaedi is an Iranian woman who has been living in London since fleeing domestic violence in her native Iran. She has been on hunger strike for nearly two weeks and is terrified that the deportation to Iran will lead to her being returned to a country in turmoil as pro-democracy protests are now tearing at the very fabric of the Iranian clerical regime.

In recent days, two of eleven protesters have been killed in public as enemies of the Iranian regime after being proscribed as 'Mohareb' (fighting against God).

Bita has been refused an asylum application by British Immigration authorities and has been placed on a fast-track scheme by the UK Border Agency. If successful, she could be forcibly returned to Iran within two weeks.

Since originally arriving in London, she has endured the trauma of incarceration at Holloway prison for women prisoners, and has been held at Yarls Wood detention center twice, while UK authorities have assessed her application.

According to an article that appeared on February 1st in the Hendon Times regional newspaper:

She said: “I feel my life is going to be finished. I'm so scared. I can't sleep during the night, I think immigration will come any time and take me away."

"My mother was beaten by my father every day. When I was a teenager he started beating me too."

Ms Ghaedi said she was also attacked by her younger brother, who is six years younger than her.

She added: “There wasn't really a specific reason, it was just because he was a man.
I saw other people were different but I couldn't go anywhere, you can't come out from your family in Iran.”

She has been taking part in pro-democracy protests in London, outside Downing Street and notably, outside the embassy of the United States during the appalling treatment of the residents of Ashraf City in Northern Iraq in the middle part of 2009.

In July of that year, Iraqi security forces attacked the encampment killing eleven people after they attempted to force its capitulation to leave Iraq and return to Iran. Had they have done so, executions would have awaited. The operation ended with Iraqi security forces taking 36 key members of Ashraf into violent custody.

The 36 residence were only saved after sympathetic Iranians all over the world, including Bita, staged hunger strikes. After 72 days, the action ended with the release of the 36 prisoners and the forced retreat of the Iraqi Government. Throughout, US authorities refused to intervene.

As a result of her campaigning, she faces almost certain execution if she is forced to return to Iran. Many of the protests she has been engaged with have been organised by the National Council for the Resistance of Iran (NCRI) and its more common Peoples Mujahedin Organisation of Iran (PMOI). The Iranian regime blame the organisations for the pro-democracy protests currently taking place all over Iran. The NCRI are widely considered to be Iran's Parliament in Exile.

Bita now lives with an Iranian man who has been a long-time opponent of the clerical regime. Her current partner, Moshen Zadshir has warned that Bita is becoming desperate and has attempted suicide.

As a result of her looming deportation, she has begun a hunger strike and has become terrified that her campaigning has placed her into direct confrontation with the Mullahs in Iran.

In recent weeks, the regime has accelerated efforts to deal with those engaged in protest in the country. Under the premise of 'Mohareb' (fighting against God), the regime has executed two men. Mohammad Reza Ali-Zamani and Arash Rahmanipour are two of eleven men hanged in public squares. The remaining nine are unlikely to survive for much longer.

On February 11th, Iran will conduct the anniversary of the 1979 uprising which swept the current regime into power and signaled the end of the deeply corrupt regime of the Shah.

Since then, the Iranian regime has consolidated its power on the International stage most recently with the giving of aid and support via the UN to the Sri Lankan Ultra Nationalist Government of Mahinda Rajapaksa in his final assault against the Tamil Tigers of Tamil Eelam (LTTE). The operation directly led to the deaths of over 35,000 people and ended with the violent defeat of the LTTE and the transit of almost a third of a million people into concentration camps, where many still remain.

At the end of January, Ahmad Jannati, Secretary of the 'Guardian Council' of the clerical regime and leading figure in the Khamenei faction called again in his Friday prayer session for the need to uphold the 'velayat-e faqih' (absolute rule of the clergy) by saying “Rioters [and] advocates of corruption on earth...those who try to shatter the structure [of the regime]...must not be treated with compassion. It is now time for toughness”. He has also addressed the head of the Iranian Judiciary saying “As you swiftly execute two Mohareb's, you must act firmly with the rest of them too”.

For many Iranians living in the UK the regime has, like its counterpart before it, become horrendously corrupt and nepotistic but chooses to consolidate its domestic power within Iran with executions deliberately carried out in public with the intent of maintaining its rule by violent force.

In just a week from now, the Iranian regime will find its celebration of its imperial power sorely tested by its own citizens as pro-democracy protesters clash with regime loyalists.

Bita has just two weeks to convince the UK Border Agency not to forcibly return her to a country likely to be in bloody turmoil, and actively searching for foreign activists to punish.

You can sign the petition to save Bita from deportation here.