Last month’s severe earthquake in Haiti could not have been prevented. The death toll may reach a quarter of a million. Some three million Haitians – a third of the country’s population – have been directly affected by the disaster. But the earthquake’s effects, the likelihood of far fewer people dying, and the extent to which corporate greed and power can – even now – make matters much worse for Haitians could all have been mitigated. 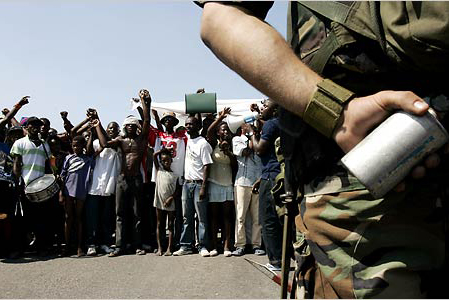 You’ll search far and wide in the US TV, radio and printed propaganda get past the stories of ‘brave US marines’ being diverted from other ‘duties’ to save lives. Not a hint that, were it not for the imperialist interference with the country by France and the US in particular, the scale of the disaster – and now of the recovery – would be very different.

Kim Ives, journalist with Haiti Liberté, puts it well when he says, “this earthquake was preceded by a political and economic earthquake with an epicenter 2,000 miles north [of Port-au-Prince], in Washington, DC.… [The] coups d’états and subsequent … foreign military occupations, in a country whose constitution forbids that, were fundamentally destructive, not just to the national government and its national programs, but also to the local governments or the parliaments, the mayors’ offices and also the local assemblies, which would elect a permanent electoral council.”
In fact, the US client political infrastructure has deliberately prevented these councils from being effective. Préval’s (the president of Haiti since the US overthrew the previous incumbent) cronies and henchmen and women, effectively dominated this structure and used it to their own ends. As anarchists, such political manoeuvres scarcely excite us. But the economic oppression wrought by successive western élites is alarming.

Two Centuries
For two centuries the big powers have bullied Haiti and its people: from the harsh reaction to Haiti’s independence as a republic of free slaves to the US-backed overthrow of President Jean-Bertrand Aristide (twice) and his replacement with unpopular puppet régimes. In 1804 the first and so far the last slave revolution in history produced Haiti as the first black republic in the world. The country was also the first independent nation of Latin America; in many ways that revolution became the touchstone for other similar revolutions. But not until 60 years later (at the time of the US Civil War, when lip service to blacks was fashionable) did the US recognise the country.

In 1915 US Marines invaded Haiti taking control of the bank and government. They occupied the country for almost 20 years – until 1934. On leaving, they installed an outfit called the Garde d’Haiti; it acted as a proxy force to maintain US interests there. In 1957 it evolved into the notoriously vicious dictatorship of François ‘Papa Doc’ Duvalier.

He was president for life and passed that title to his son, Jean-Claude Duvalier, when he died in 1971. The US actively supported the family, its oppression and further degradation of life for Haitians. By the 1980s it was obvious to Washington that so great was the oppression that resistance movements were becoming effective. The solution was to stage faux elections (the first was in 1986) to lift the lid on such pressure. In fact Haiti was the first country in Latin America to expose and confound these bought elections by choosing a poor parish priest, Jean-Bertrand Aristide, as president.

Aristide had no illusions about what Haiti needed – real independence from the US. At his inauguration on February 7 1991, he actually declared Haiti’s independence (from US control) a second time. One of his first moves was to increase the minimum wage. Less than a year later Washington responded with a coup d’état. Aristide was removed for the first time by Clinton (now appointed – along with George W Bush, who staged the second coup, in 2004 – by Obama to oversee Haiti’s ‘recovery’). Aristide remains in exile. Security Adviser at the time Condoleezza Rice forbade Aristide from setting foot “anywhere within the Western Hemisphere”, threatening Jamaica in the process.

Economics
Aristide had a nationalist agenda; it was to try and build the national self-sufficiency of the country. Washington couldn’t allow that. The US élite insisted that the nine principal state and publicly owned industries be privatised and sold off to US and foreign investors. So towards the end of the 1990s they forced through the privatisation of the Minoterie d’Haiti (which produced flour for bread) and Ciment d’Haiti (cement). The former was sold to a company of which Henry Kissinger was a board member. The mill was closed and Haiti now has no flour mill. Flour (and rice in a country once self-sufficient) for hungry Haitians has had to be imported over the last decade – at great cost… from the United States. Haiti is a country mostly made of limestone (the foundation of cement). When the Ciment d’Haiti was closed down, US (-backed) corporations began using the docks of the cement company to import cement – again at greater costs. Now, with buildings flattened, Haiti is going to have to pay for the import of millions of tons of cement, a commodity it once had in abundance.

One of the biggest challenges after the earthquake was the management of information between families and loved-ones. The Haitian telecommunications company, Teleco, was highly regarded amongst the Haitian state industries. Just a week before this earthquake, Teleco was privatised. It was sold to a Vietnamese company, Viettel. All the communications today are in the hands of the three private cell companies, Digicel, Voila and Haitel. Ives again, “…thirteen years ago, we were doing a delegation here to talk to the [telecommunications trade] unionists… A certain Jean Mabou, the union leader, took us to a room where it was filled with new, brand new, modern telecommunications equipment, boards, all sorts of things. He said, ‘We’ve got these, and they won’t allow us to install them. They are deliberately undermining the state company so they can sell it’.”