This morning students and campaigners commenced a solidarity hunger strike at theLondon Offices of Serco. Protesters will entertain a constant presencefor2 days between 8am and 8pmto draw attention to the violent response of the centre staff and UK Border Agency (UKBA) to the peaceful hunger strike at Yarl’s Wood Immigration Removal Centre, Bedford as a build-up to a London-wide protest held at the same location on Friday at 2:30pm. 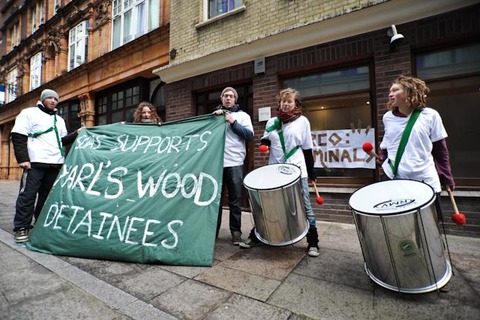 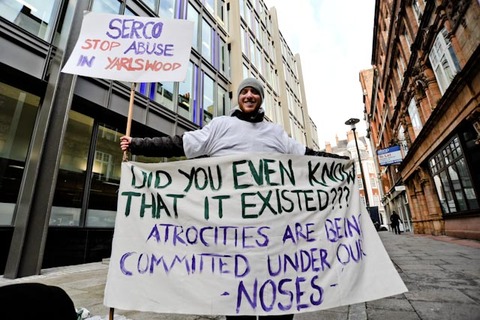 Over 75 women detained in Yarl’s Wood I R C began a hunger strike on the evening of Thursday04/02/10.In their statement the women call for an end to detentionand appeal to the UKBA to "allow enough time and make resources available to residents who need to fully present their cases". On Monday 08/02/10 this protest was broken up by force: 70 women were locked in a corridor for up to 8 hours without access to water, health care or sanitary products. Many collapsed and twenty who climbed out of a window were beaten and
remain in isolation.

One woman trapped in the corridor reports that"the guards were doing a roll call by holding up photos of us to the window. They did not help us when women started to collapse."While some officers stood by laughing at the women having to urinate on the floor of the corridor, others made sure not to film their colleagues assaulting the women. Another woman outraged over the guards' behaviour says:"Many guards behave like we are in prison. They should go to the army, this place is not for them."

Protesters are calling for Serco to end their complicit behaviour in kettling peaceful protesters inside the detention centre without allowing access for emergency services. Protester Jane Peder says, "Serco is running Yarl's Wood as a business at the cost of women and families who come to the UK to ask for protection. Serco staff is acting as front-line immigration staff - they clearly overstepped their capacities and need to be held accountable for their actions
against the women at Yarl's Wood."


To date, women who sustained injuries have not received adequate treatment in the privately- run health care centre. Many women have been threatened and intimidated by centre staff. Four women are being held at Bedford Police Station without charges. Regardless, many women are continuing the hunger strike because they have not been given a response to their demands. "Without response to what the women have asked for from the UKBA and without
response to what happened at Yarl's Wood we will not stop.", says protester Carry Jon.


Throughout the day women have been calling to contradict claims by the Home Office that the hunger strike has ended. “Not at all” according to Ms Debo Doris, “up to twenty of us are refusing food on Avocet wing”. She had heard that eight to ten women are still striking on Dove wing. Women on Bunting wing told us “we are on hunger strike still but we are scared of what they might do to us”.

One woman, Blessing Felix, who was detained on arrival three months ago was given removal directions on Saturday. She has been taken to Heathrow tonight and faces return to Nigeria. She has no lawyer, and was unable to get legal advice yesterday since the whole centre was “locked down” and all visits including legal visits were cancelled. We know that Ms Felix reported to the authorities that she suffered violence in Nigeria. How can the Home Office claim that it is safe to send her back; the full facts of Ms Felix’s case can’t be known if she didn’t have a lawyer to represent her. It seems that the Home Office will stop at nothing to punish women for protesting.

Earlier today Ms Gladys Obiyan, together with three other women, was taken to Bedfordshire police station. They were not arrested or charged. Her friends believe that the authorities have targeted her as a hunger strike ring leader and are punishing her by taking her to Dungavel, denying her contact with her partner who has British citizenship, and her many supporters. Ms Obiyan has a compelling case to be released from detention. Her asylum claim based on years of domestic violence in Nigeria, the threat of FGM and inability to get protection from the State, is pending.

Many other women are clearly at risk of reprisals for their courageous action, including transfers and fast tracked removal. The more protest that comes from outside the more protection women will have.

Please call Virgin airlines and urge them not to deport Ms Blessing Felix on Flight VS 651 to Lagos, 10.20pm – even at this short notice it is worth doing especially as Virgin have in the past agreed not to carry those who are terrified of being returned to the violence they fled.

Write to Phil Woolas MP, the Minister of State for Borders and Immigration

UKBApublicenquiries@UKBA.gsi.gov.uk to protest at retaliation against vulnerable women which is potentially a breach of human rights, and detention centre rules.

free movement for all