2009 was a particularly bad year for the Italian prison system, especially if you happened to be one of its ‘guests’ having to suffer the severe overcrowding that was exacerbated by an overall lack of funding in the system. As a result, the summer saw a series of prison protests, including mass hunger strikes and riots, as well an explosion in a historically already high rate of suicide, self-harm and other ‘suspicious’ deaths. 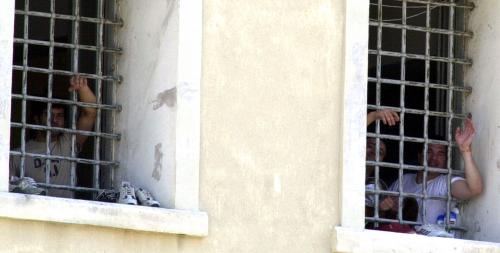 This overcrowding crisis means that the prison population currently stand at 64,910, its highest level since 1946, a population housed in jails built for only 43,480. The most obvious effect of this overcrowding is on the suicide rate. In the decade 2000-09, there were 1,568 deaths, 565 (36%) of which were suicides (with 12 times that number of attempted suicides). Last year there were 174 deaths in Italian prisons, of which 72 (41%) were classified as suicide. That is 27% higher than the average for the previous decade, against a 10% for the overall death rate. This is the highest suicide rate since 2001 (12.11 per 10,000 vs. 12.52), and by far the highest number for more than 20 years. It is also the highest in Western Europe apart from France, Luxembourg and Switzerland! And just to reinforce the dangers of being a prisoner in Italy, in the first 2 weeks of 2010 there have already been 5 suicides.

The initial response of the Italian government to the unrest last summer was to announce a series of draft emergency plans last August. These plans have now come to fruition with the announcement of a yearlong state of emergency throughout the Italian prison system. Presented to the Council of Ministers on the 12 January by Justice Minister Angelino Alfano, there are four elements to these plans:

* the building of 47 new prison wings, largely using private investment, creating 21,749 new beds and bringing the prison capacity up to 80,000;
* to amend Article 385 of the Penal Code and bring in home detention for those with less that a year to serve on their sentences (estimates put this at 32% of the current prison population) and ‘community service’ for those sentenced to less than 3 years;
* 2,000 new prison officers;
* and an extension to the powers already granted to Franco Ionta, head of the DAP (Dept of Prison Administration) as special commissioner for prison construction. The later means that he will be able to summarily decide on all contracts involved in the new €600m building scheme, answerable only to Berlusconi himself. Planning will be simplified and projects will follow the pattern of 24 hour working followed in the aftermath of the L’Aquila earthquake.

Needless to say the plans have not been universally popular. During the debate there was a demonstration by public sector unions outside the Italian parliament organised by UILPA Prisons (Italian Workers’ Union – Civil Servants section), OSAPP (Autonomous Union of Penitentiary Police), FP-CGIL (Civil Servants section of the Italian General Confederation of Labour) and SI.DI.PE (Union of Prison Directors and Officers). FP-CGIL, UILPA, RdB (Rank & File Union) and FLP (Federation of Public Workers & Functionaries) have also declared a strike by judicial workers for 5 February in opposition to the plans.

The PSD (Party of Security and Defence Professionals – effectively the Military’s trade union even though they are banned from joining unions) has claimed that no new building scheme is needed as there are already 40 prisons standing empty across Italy. Some, like San Valentino (Pescara) and Arghillà (Reggio Calabria), have never been occupied. Others, such as Morcone (Benevento), are standing empty after extensive refurbishment.

The government’s scheme has also been denounced by prisoner support groups such as Antigone and Hands Off Cain, and the opposition PD (Democratic Party) have introduced a counter-motion declaring that the whole judicial system is broken and building new prisons is not the solution. They point out, amongst other things, that 50% of all prisoners are currently on remand and 30% will be inevitably have the charges against them dismissed. Other have pointed out that the government’s anti-immigration policies and the general racism in Italian society means that 37% of the prison population are foreign prisoners, where as only 6.5% of the total population are foreign nationals.

Inevitably criticism has also focused on the role and powers of Franco Ionta and the potential for corruption given the sweeping powers that have been invested in him, under the direct supervision of il Dude Berlusconi himself. Given the government’s professed anti-mafia/anti-corruption stance, it is to be seen whether the financial corruption alleged to have occurred around the L’Aquila projects will be repeated with the prison building schemes.