On Saturday, 13 February at 12 noon, UK and Canadian environmental activists opened the ‘Oil-ympics’ at Canada House in Trafalgar Square. The event, timed to coincide with the opening of the 2010 Winter Olympics in Vancouver, highlighted the role of British companies in the single biggest industrial project on earth, the Canadian Tar Sands (1). 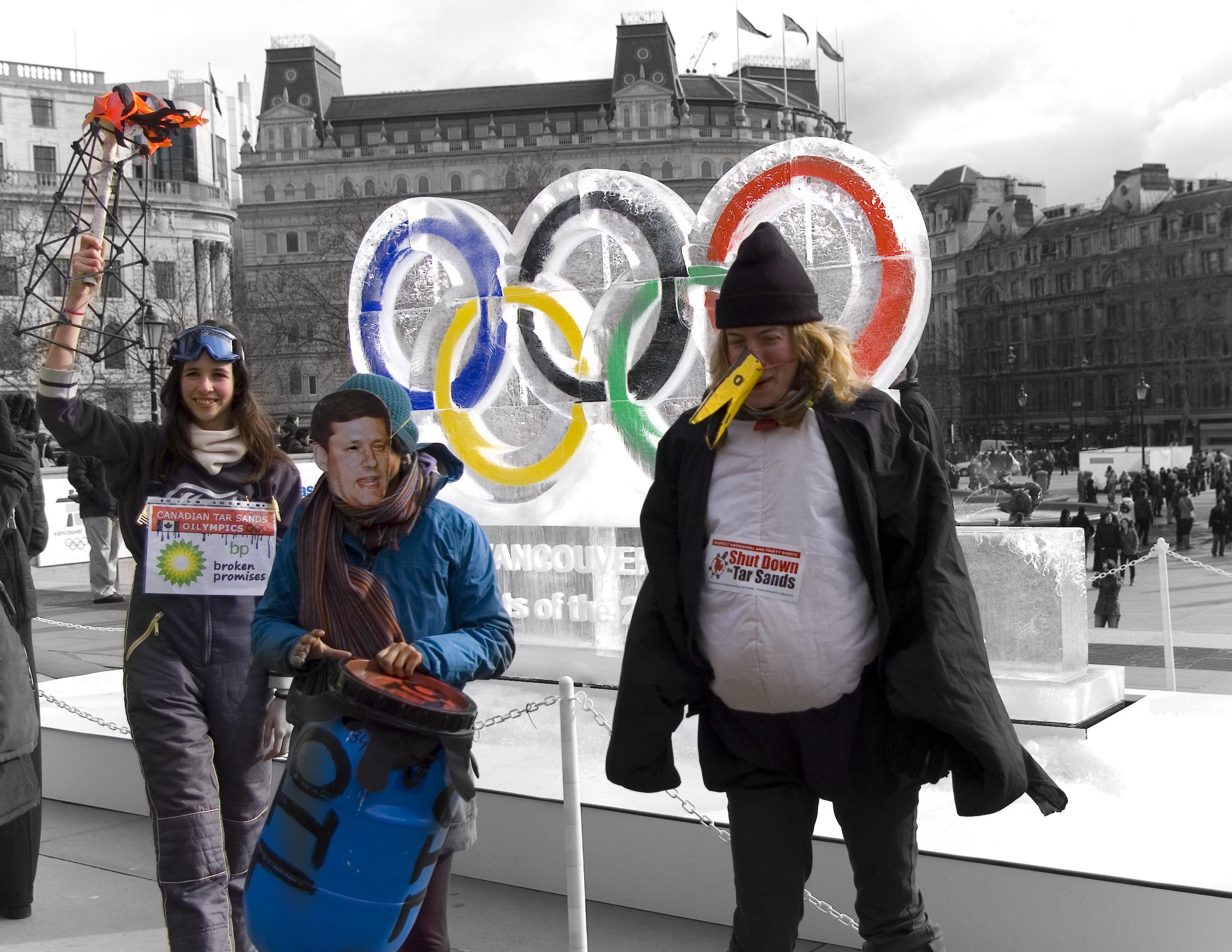 The Oil-ympics event saw activists divided into three teams: BP, Shell and RBS, all ready to ‘Race to the Tar Sands’. Traditional winter sports were subverted to illustrate the irony of Canada portraying the Vancouver Winter Olympics as an event which celebrates Canadian indigenous culture and environmental sustainability, while in the neighbouring province of Alberta, Canadian First Nations are finding that their lands, communities and health are being devastated by the Tar Sands (2).

BP received special attention after it recently unveiled plans to embark on its first Tar Sands extraction project. BP had previously sold its potential stake in Alberta in 1999, when BP’s chief executive at the time, Lord Browne, deemed Tar Sands extraction to be economically unviable and environmentally unpleasant. However, BP’s new chief executive, Tony Hayward, is now set to make BP a major player in the Tar Sands with a partnership with Canada’s Husky Energy – a venture that is facing sharp criticism from BP’s own shareholders (3, 4).

Alice Hargreaves, of the UK Tar Sands Network, said: “BP has been trying to prove that they are ‘Beyond Petroleum’ for years, but with their entry into the Tar Sands project, we can see the truth: Beyond Petroleum is nothing more than a Broken Promise.(5) BP shareholders are rebelling over this betrayal, and so are we. Over the next two months, we’ll be putting the pressure on to make sure BP get the message – stay out of the Tar Sands!”

(1) Deposits of Tar Sands are spread out over 54,000 square miles of prime forest in northern Alberta, an area the size of England and Wales combined. Producing crude oil from the Tar Sands generates up to five times more carbon dioxide, the principal global warming gas, than conventional drilling: see

(2) This action is in solidarity with Canadian First Nations who have called for a moratorium on the Tar Sands. For more information see the Indigenous Environmental Network:

(3) BP has entered a joint venture with Husky Energy to develop a Tar Sands facility which will be capable of producing 200,000 barrels of crude a day by 2020. In return for a half share of Husky’s Sunrise field in the Athabasca region of Alberta, the epicentre of the Tar Sands industry, BP has sold its partner a 50 per cent stake in its Toledo oil refinery in Ohio. The companies plan to invest $10 billion in the project, making BP a major player in Tar Sands extraction. The final investment decision will be made in the next few months.

(4) A coalition of shareholders has tabled a resolution for BP’s AGM on April 15 highlighting the environmental and social risks of Tar Sands extraction.