For the first time europe`s biggest annual nazi-march at Dresden, Germany was stopped by mass-blockades and antifascist action.

Translation press release of Alliance "Dresden Nazifrei" and some further information plus translation of antifascist ticker. 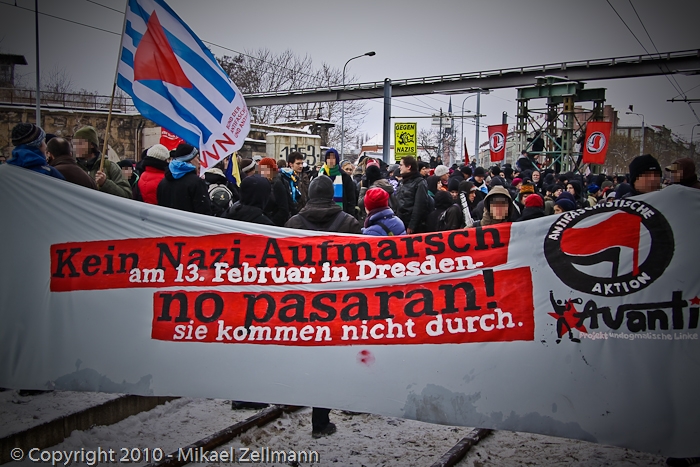 "no pasaran" - the slogan of the day 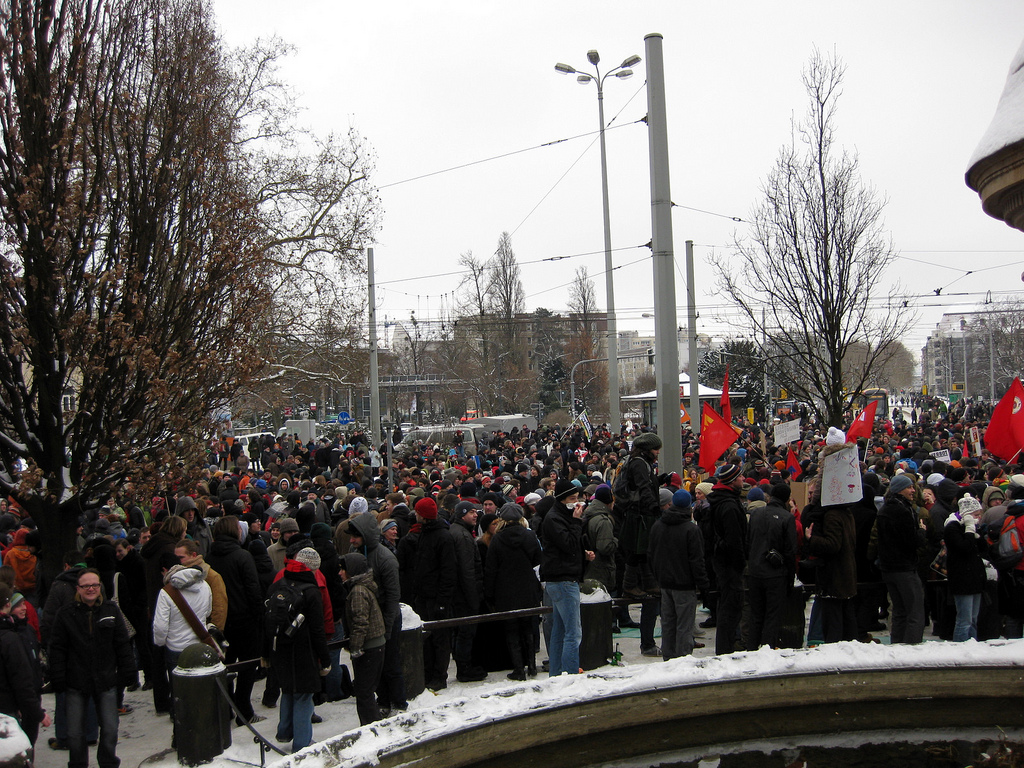 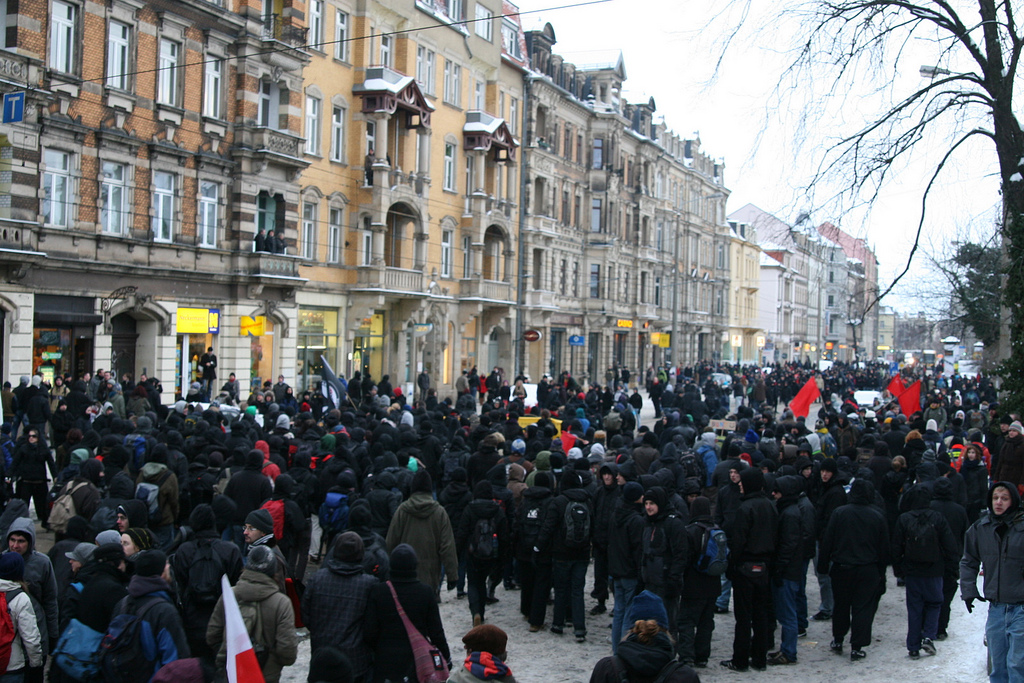 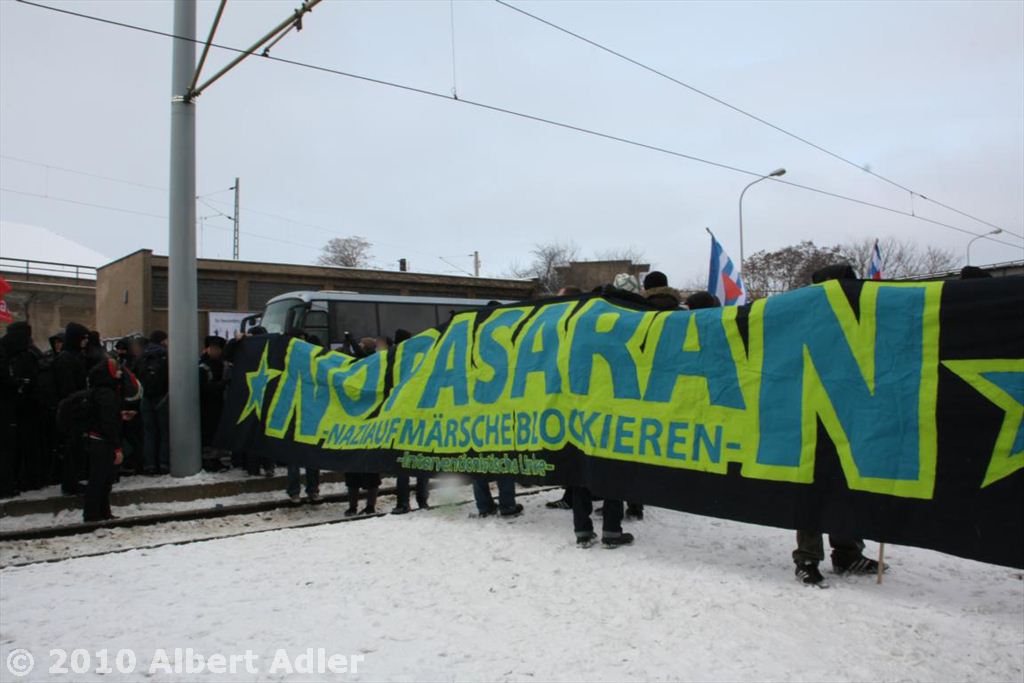 protestors sitting on the street 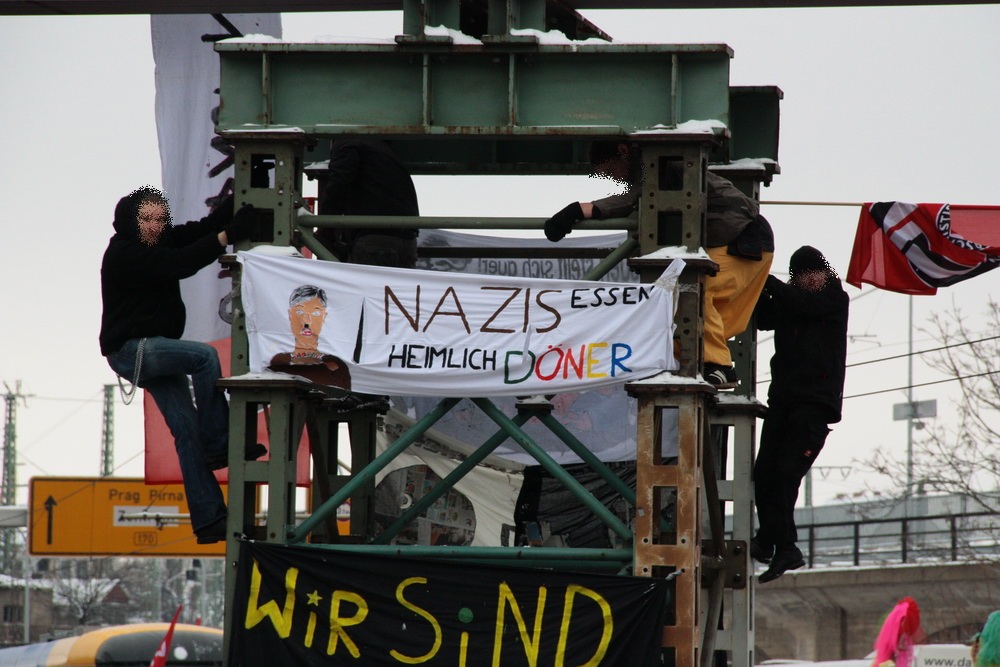 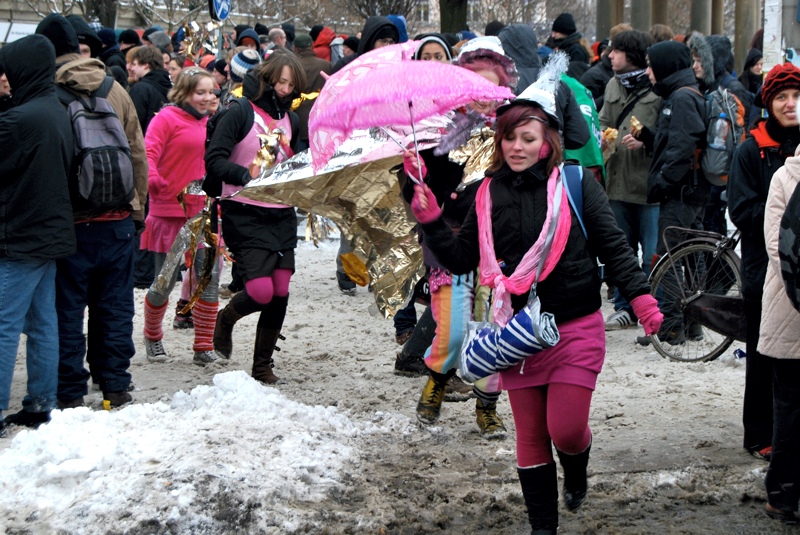 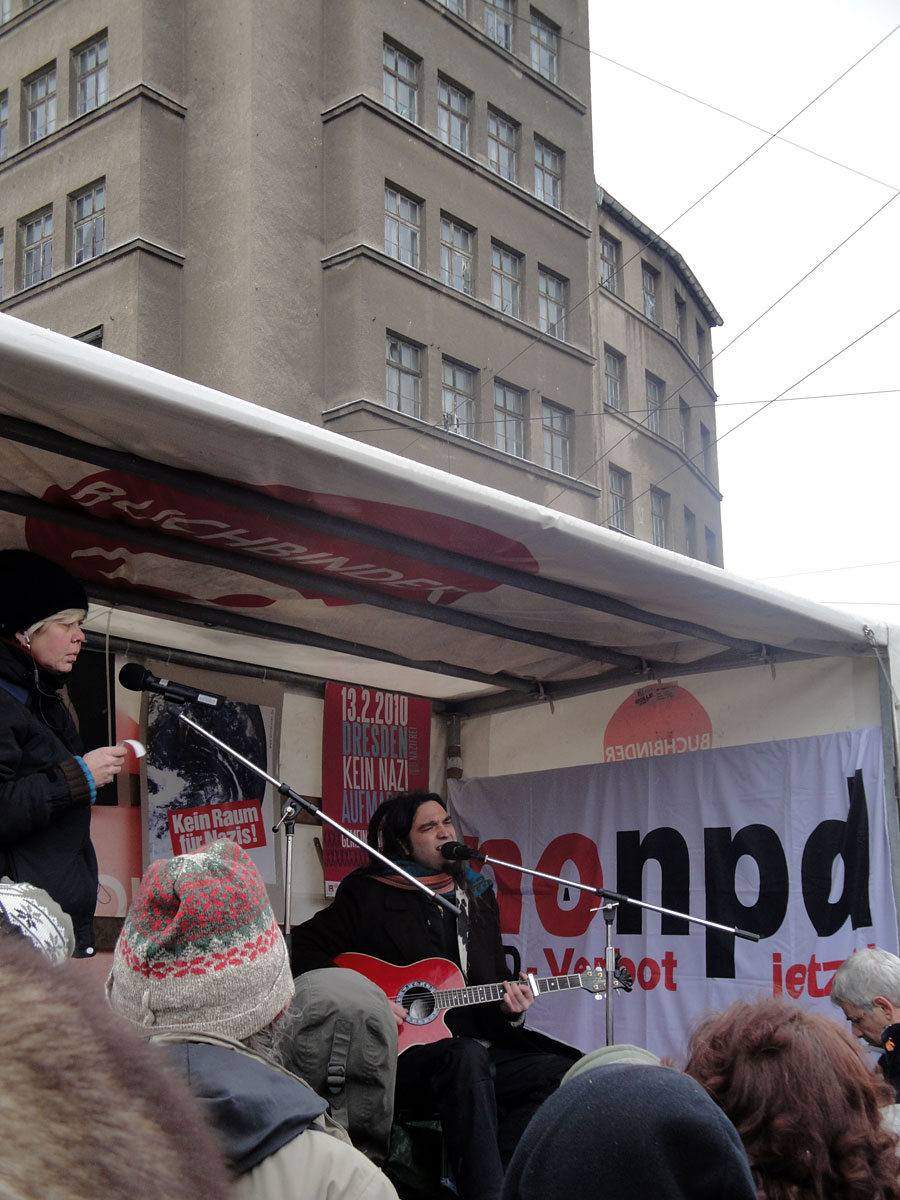 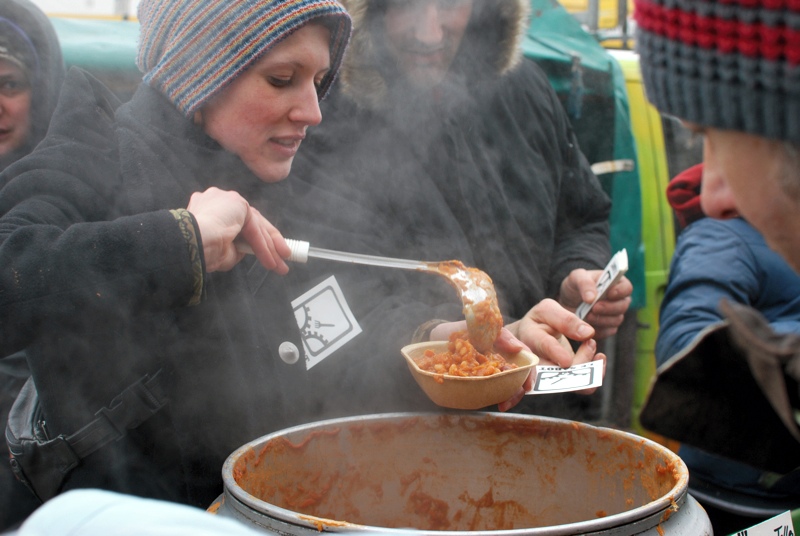 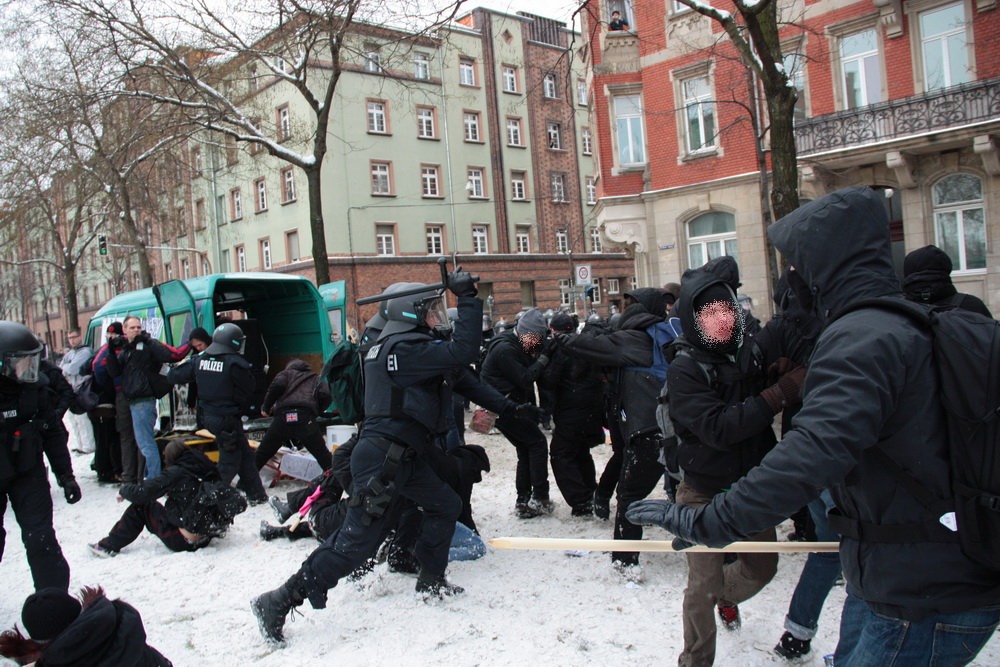 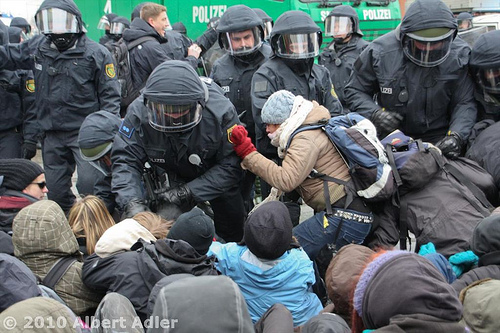 police tries to break the blockade 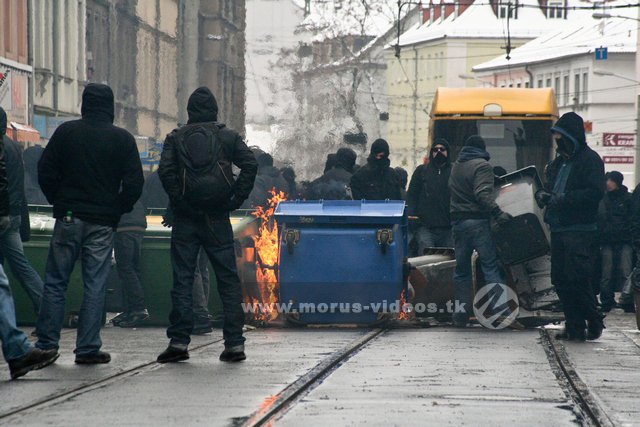 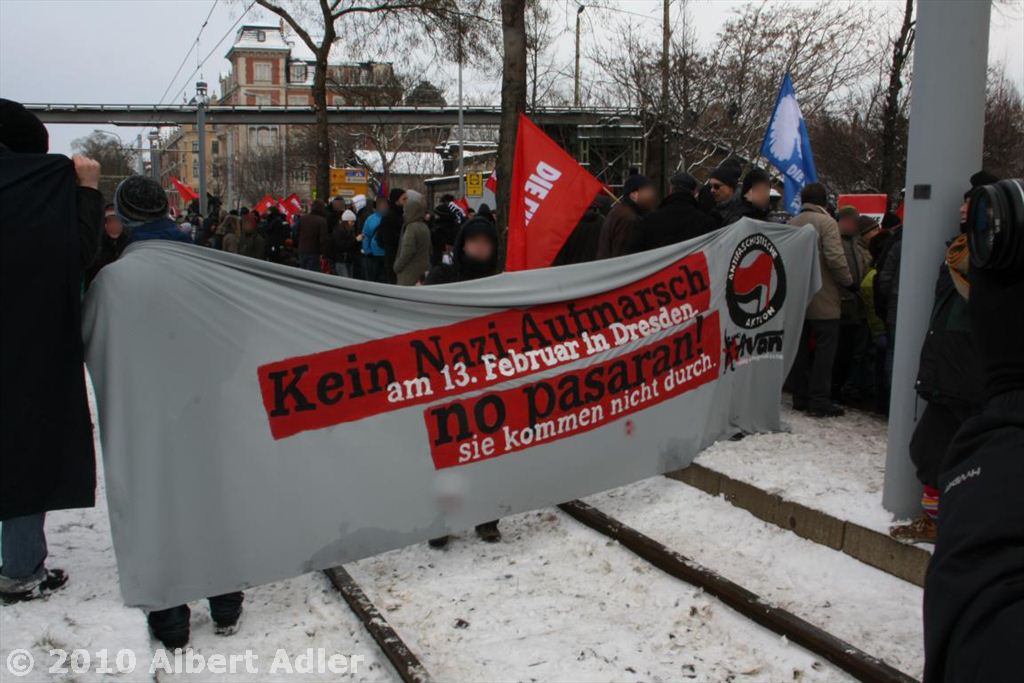 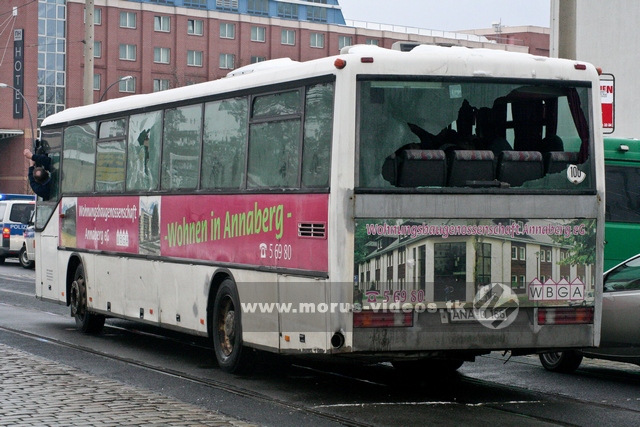 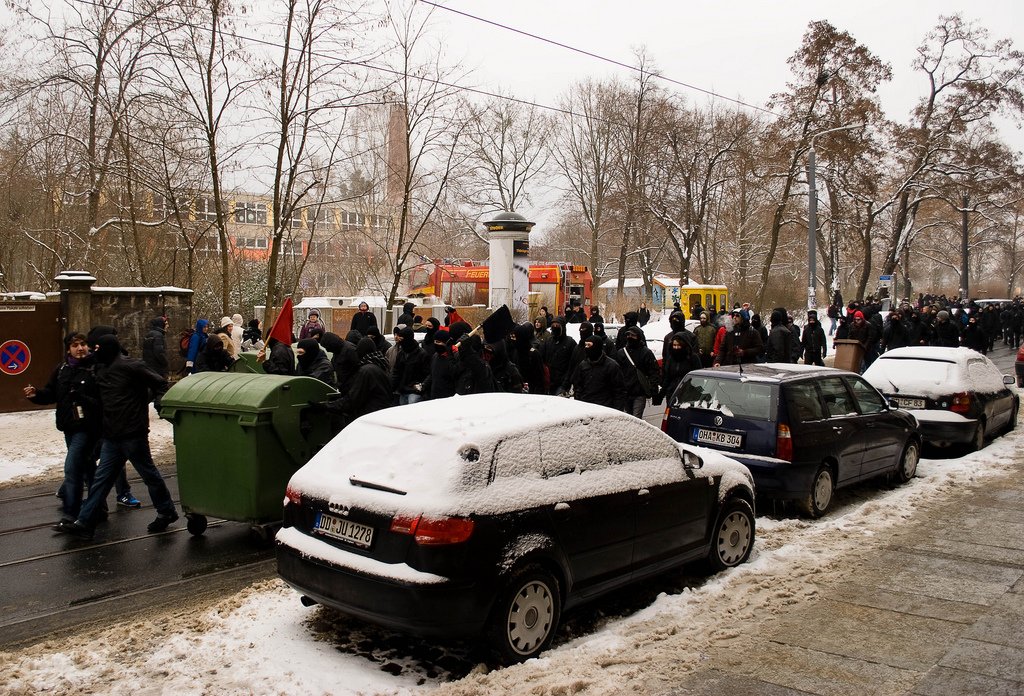 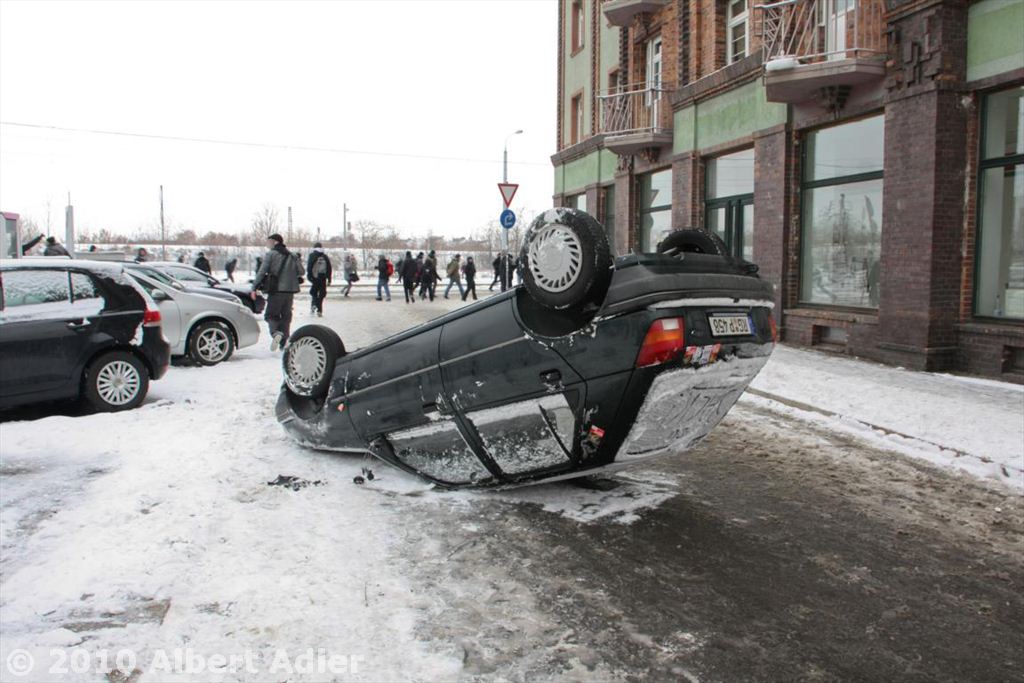 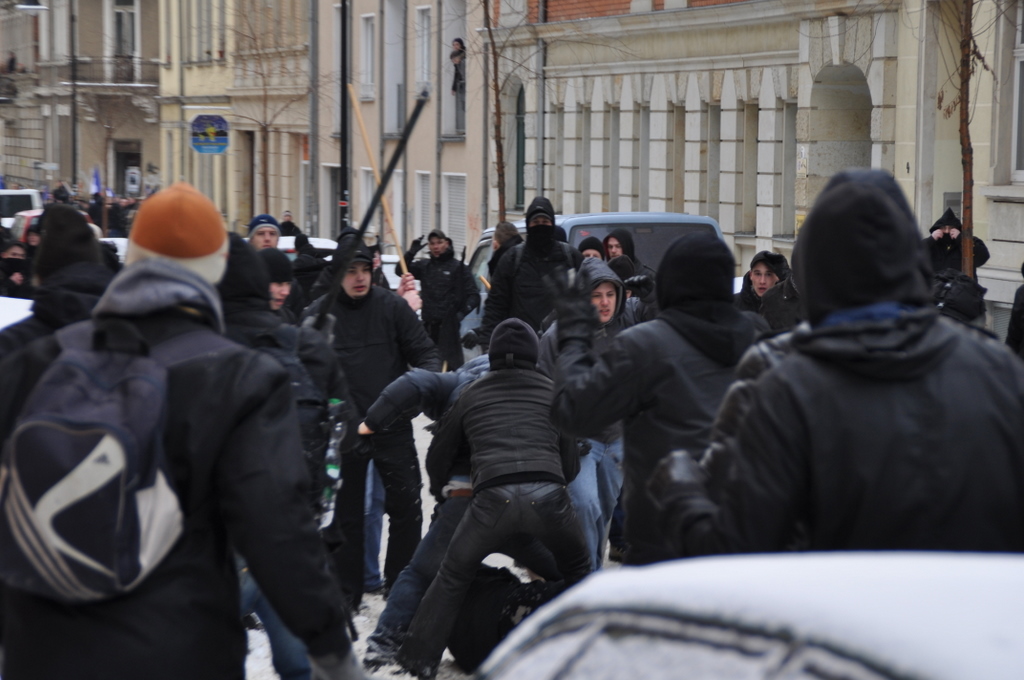 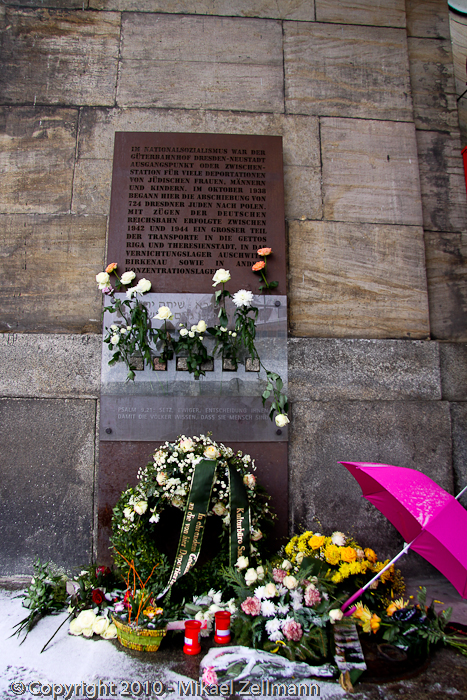 # 12.000 antifascists joined the protests at Dresden-Neustadt

The Alliance „Dresden Nazifrei“ (Dresden without Nazis) is trilled: For the first time 12.000 people prevented the annual nazi-march in the capital of Saxonia. For several hours they occupied streets and plazas close to Dresden-Neustadt train station. Around 17:00 o`clock the message of success came: die police cancelled the nazi-march because of the protests.

"Stopping the Nazi march was a great success for the Alliance „Dresden Nazifrei“. 12.000 people from Dresden and the whole nation surrounded the gathering point of the nazis, thanks to everybody who participated in our mass-blockades without fearing repression“, said spokeswoman Lena Roth. "It wasn't easy -- there were people injured in Nazi attacks and it was horribly cold, but it was worth it," she said. Roth stresses the fact that for the first time the biggest nazi-march in europe was stopped. Crucial for this success were the diversity and determination of the Alliance „Dresden Nazifrei“ and the clear blocade-concept.

„The previously followed strategy of intimidation by the Dresden authorities did not work. On the contrary: After the human chain, organized by Helma Orosz [konservative major of Dresden] ended thousands of people were pouring into Dresden-Neustadt to support the blocades“ declared Roth. The human chain far away from nazi-gathering point critized Roth as „symbolical and ineffective show“. Orosz alsways wants to send just „signals“ but nazis are laughing about this. It was our blockades in Dresden-Neustadt which really prevented the nazi-march.

After the attempted but blocked nazi-march departing nazis gathered in Pirna, near Dresden and attacked a bureau of the Socialdemocratic Party (SPD) and flats of „known antifascists“.

The mass-blocades were organized on the initiative of the antifascist alliance „No Pasaran“ a german-wide network of antifascist groups and were supported by civil society groups, [left/liberal] parties and unions. In the run-up more than 600 organizations and more than 2000 individuals signed a list of support, declaring that they would come to Dresden to block the nazis. Some weeks before Dresden Authorities confiscated posters of the Alliance, which mobilized for the mass-blockades and forbid rallies, nazis attacked supporters of the Alliance and the police proudly announced the acquisition of american pepperball-guns

All in all there were five mass-blockades surrounding the gathering point of the nazis in front of Dresden-Neustadt train station. Police tried several times to break the blockades but did not succeed. Additionally for short time even the railroad tracks were blocked by antifascists causing massive delay of trains filled with nazis. Because of the blocades a lot of nazis did not manage to reach their gathering point in time. It was not untill around 14/15 o`clock when all the 5000 nazis reached their gathering point.
While the action-consent of the blockades was „We do civil disobedience against the nazi-march. We do not escalate the situation. Our mass-blockades are human blockades. We are showing solidarity with all people, who share our goal to prevent the nazi-march.“, groups of militant autonomous antifascists moved through Dresden-Neustadt nearby the blocades building several „material blockades“/barricades, set some on fire and clashed with arriving nazis who tried to reach their blocked gathering point. During this confrontation literally no police was present. Several nazis, but also antifascists got hurt. Nazis attacked a alternative/left center/squatt in Dresden-Neustadt, the „AZ-Conni“ while they tried to reach their gathering point. Several nazi-busses were smashed (attacked with stones causing brocken windows), some nazi-cars were overturned. The more than 4000 policemen and -women partly lost control over the situation and did not allow the nazis to start their march because they could not guarantee for their safety. „Only“ 27 people were arrested, this appears to be a little number compared to the actions going on.

„They did not come through“ stated the antifascist „No-Pasaran“ network. And further „Antifascism is a do-it-yourself thing, you cannot count on the state“ (source:

To sum up: The peacefull blocades were the key to succes, the surrounding direct action of little militant antifascist additionally confused the situation for the police. This can be a first step to fight the growing neo-nazism in Saxonia which was in the last years a stronghold of the nazis. The years before up to 7000 nazis marched without any interruption – protest was not strong enough then to stop them.

After the nazi-march was cancelled all protesters gathered at Albertplatz – a plaza in Dresden-Neustadt to celebrate their victory in a final rallye. After the rallye with different speeches a spontanious antifascist demonstration marched through the city.

To celebrate their victory, antifascists created a little song, dedicated to the stopping of the nazis march on saturday:

pictures of the nazis:

9:10 already 60 nazis at the train station neustadt. police with tanks and hydrants.

9:35 more and more nazis come to the train station neustadt. a lot of them dressed up as "autonomious nationalists" (neo-nazis dressed in black, with scarfs to cover the faces and leather gloves...). police sais their mood is agressive.

9:45 150-200 activists with red banners try to break through the police lines into the train station neustadt. police stops them with pepper spray.

10:45 already 2000 people at the mass blockade in hansastr. police closes the bridges, no way to come from the east to west part of the city any more.

10:55 police doesn't allow neither journalists nor members of parliament to enter to the train station neustadt in order to get informations about the situation there.

11.05 the railways are blocked by 20 people on the rails between the train stations neustadt and the main train station.

11:40 police proclaims not to evict blockades as long as they will be peacefull. all four bridges around the train station neustadt blocked now with 200-500 people. other blockades in hansastr. (ca.2000), albertplatz (3000-4000) and bischhofsplatz (300). nazis, that arrive in trains at the station neustadt refuse to get out of the trains.

11:55 railways still blocked. 360 nazis got stuck in the main train station in the east part of the city. attacks on nazis in hoffmannstr., one nazi car turned onto the roof.

12:15 nazis attack blockade at the bischhofsplatz.

12:45 eskalation at the bischhofsplatz: police loses control about the situation. the blockade is directly on the route of the arriving nazi-busses. one bus attacked by antifascists. 30 nazis escape from the bus and have to flee down the street.

13:10 a huge group of nazis is walking from the north-west of the city towards the train station neustadt. will come in contact with the blockade in hansastr.

13:20 police evicts blockade at bischhofsplatz. people sit down and try to resist.

13:40 nazis in small groups walk through the city.

13:48 2000 nazis, that had to stop their busses in the north because of the blockades, walk now towards the train station neustadt.

13:52 police "pleases" the people at the blockade to go: "we don't manage it" although they are more than 4000 policemen.

14:05 big nazi group arrives at bischhofsweg from the north. police already evicted the blockade there.

14:07 fights between police and antifa activists close to albertplatz.

14:10 4000 "autonomious nationalists" walk through the city towards the train station neustadt.

14:30 police evicts blockade at königsbrucker str.; fights between antifas and nazis at bischhofsplatz, some people injured. other group of 500 nazis attack the alternative youth center "conni". lots of injured, one activist hardly injured.

14:37 antifa organisation team still insists on mass blockades. calls for supporting the blockades at albertplatz and hansastr. meanwhile huge groups of nazis walk through the city and attack people.

14:50 most of the nazis arrived the train station neustadt. police tells the nazi-march-organisators that they can't walk, because the police can't guarantee for their security. nazis insist on marching.

15:10 nazi-march cancelled. antifa doesn't trust the police news and calls for blockades until 17:00

15:40 activists gather at hainstr. in oder to block the south of the train station. if it works, there won't be any way for the nazis to leave the train station unless the police doesn't evicts the blockades.

15:50 nazis in march-formation but some of them leave in small groups towards the blockades. tension and small fights around the train station.

16:17 nazi-march-organisators deal with the police in order to march. police evicts blockade at dammweg. nazis will propably march to the north towards the direction of the alternative center "conni" that was already attacked twice by nazis today.

16:15 police evicts blockades in the north, showing up with hydrants and tanks. police sais: "maybe a small nazi-march we will allow."

16:30 police doesn't manages to evict the blockades in the north. so they tell the nazis that they can't march. thousands of nazis shout: "we want to march" and "streets free for the german youth".

16:40 police still tries to evict the blockades in the north at hansastraße/fritz-reuter-str and friedensstraße. police shows up with hydrants. antifas are hunted through the streets by the police. situation escalates. cars used as barricades. antifas fight the police back with firework, bottles and stones.

16:45 nazis freak out. attack the police with stones, bottles and firework in order to break through the police lines and march.

16:50 police special forces arrive with wooden weapons at hansastraße/fritz-reuter-str in order to attack antifas. police tries to turn off the burning barricade at hansastr. with a hydrant.

16:55 nazi-march-organisators call their foottroops for silence: "we are here for grief". nazis stop attacking the police.

17:05 nazis give up. they won't march today and go back to the trains. still no "all-clear" by antifascist organisation team. violent actions of nazis expected as a revenge for the defeat on the streets today.