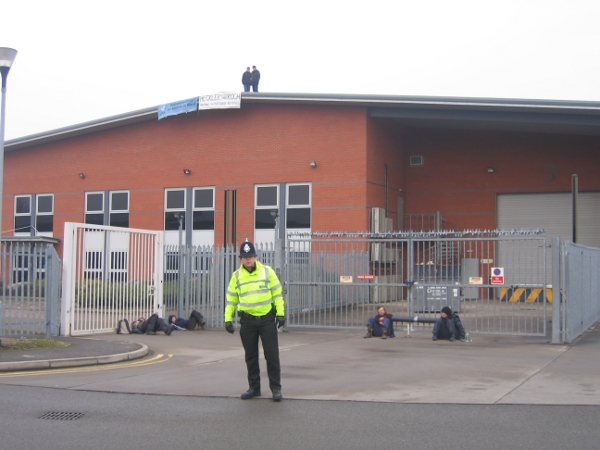 Giving up selling guns for lent? 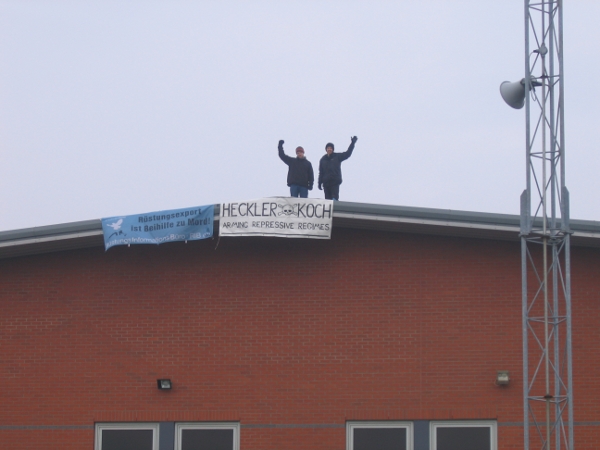 armed to the teeth

no arrests as of 11.30. police stopping anyone entering industrial estate. Managing director of H&K has come and asked the protestors to leave...

Early this morning anti-arms trade campaigners climbed onto the roof and locked themselves to the gates of the UK headquarters of the major arms company Heckler and Koch to protest against the company’s unethical activities; Unit 3, Easter Park, Lenton Lane, Nottingham NG7 2PX

Photo Opportunity: Those on the roof along with a large banner can be seen from the entrance to Easter Park industrial estate, as can those locked onto the gates.

Heckler and Koch is the world’s second largest manufacturer of handguns, assault rifles, submachine guns, machine guns and grenade launchers (1). Millions of H&K weapons are currently in use in over 90 countries, falling into the hands of child soldiers in Africa, terrorists in the Middle East, militias in Darfur, rebels in Nigeria, arms traffickers in the Philippines, mercenaries in Iraq and organised criminals in Serbia. Heckler & Koch weapons have been used by armed forces in conflicts in which those forces have been accused by international monitors of war crimes, including Bosnia in 1991, South Ossetia in 2008 and Sri Lanka in 2009. In total, H&K weapons are estimated to have caused 1.5 million deaths worldwide to date.

Heckler and Koch’s office in Nottingham is responsible for ‘international customer sales and customer services’ for non-NATO countries. There is evidence to suggest that Heckler And Koch have used the UK to make and sell weapons to countries that it has been prohibited from selling to by the German government due to concerns over repression and human rights abuses, including Nigeria, Kenya, Indonesia, Sri Lanka, Nepal, Lebanon and Georgia. Those who flee the suffering and conflict caused by these weapons often seek refuge and asylum in countries such as the UK, to be met with violent and oppressive border regimes and immigration systems that force them to return against their will to the countries they fled from.

The office in Easter Park in Lenton has been a target for the Shut Down H&K campaign for over a year. The campaign was established by local residents in 2008 who were outraged at the presence of such an unethical company in their city, and has been holding monthly demonstrations and pickets outside the offices and in the market square to raise awareness and protest against the company’s unethical activity. In December 2009, the campaign sent an open letter to the company asking for information regarding Heckler and Koch’s recent activities, but is yet to receive a reply (2). It is due to this lack of response from the company that the campaign feels today’s activities are necessary in order to place further pressure on the company.


Notes for the editor:
(1) Heckler and Koch are a German company with offices in the UK, France and the US. Sources for the information presented here are available on request. For more information regarding the sale of Heckler and Koch guns to repressive regimes, conflict zones, and human rights abusers, please see recent posts on the campaign’s website (address given above).
(2) A copy of the letter can be found here:

The last lock-on was cut free at 12.30 this afternoon after 6 and a half hours of blockading. The six of them are now at Bridewell Police station. The roof occupiers are still up there but have decided to come down now that the others are removed. They wanted to use a ladder, but health and safety officials decreed it too dangerous, so a cherry picker is unfurling to bring them back to the ground. They will be on their way to Bridewell.