Harsh sentences delivered
On Friday morning last week the waiting room inside Isleworth Crown Court started to fill with some of the protesters who had taken part in the London-Gaza protests in January last year. They were there to be sentenced for their role in those protests. The defendants had all pleaded guilty to charges of violent disorder, some because of pressure from their lawyers, others as part of a plea bargain and in fear of a heavier sentence if they stuck to their original "not guilty" pleas. Also present were family members and friends who had come to lend their moral support. The atmosphere was one of tense, nervous anticipation. Most of the defendants had been told that they could expect to be sentenced to community service, which is what the author of the pre-sentence reports had recommended. Others expected a custodial sentence but, in light of their early "guilty" plea and other mitigating factors in their favour, a relatively short one. 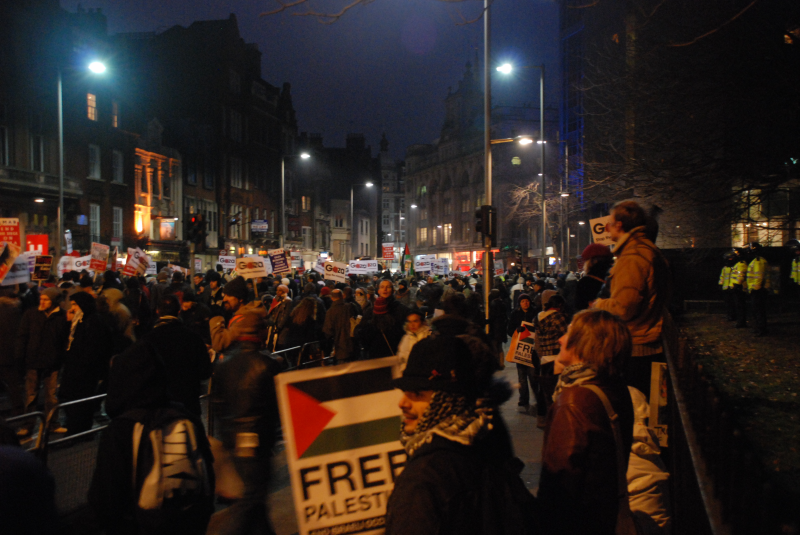 However, the mood changed abruptly once the first sentence was read out and the young man in the dock was led away mutely to serve two years in a young offenders' institution, while his family filed out of the court room in shock. As people in the waiting room crowded around trying to comfort the near-hysterical sister of the young man just sentenced, panic, fear and tears were evident among several of the others waiting for the court's judgement.

Mitigating factors
That young man's offence had been caught on CCTV: he had thrown a few sticks, struck a police horse twice and entered a branch of Starbucks after it had already been looted by others looking for things to throw during the demonstration. Despite his age at the time of the protests (19) and his of previously good character; the fact that he had entered a timely "guilty" plea (and was therefore entitled to full credit and a reduction in his sentence); was assessed to be a low risk in terms of re-offending and a low risk to the public; had shown remorse for his acts; he was a committed student in his second year of a three year course; and he cooperated fully with the police, it didn't seem to matter when it came to sentencing.

The context of the protest
Moreover, it was brought to the court's attention that the defendant was Palestinian and only came to Britain in 1990. He was, therefore, very naturally deeply affected by the war crimes that Israel was perpetrating in his homeland at the time of the demonstration he attended. He was there because the governments of the world were doing nothing to stop the Israeli onslaught. However, at no point in any of the cases before the court did the context of the protests get a mention. The prosecution at one point simply said that the protest was "linked to unhappiness with the conflict in Gaza", a gross under-representation of the situation. The issue of context is vital as it goes to the very heart of the matter. The court was not dealing with a bunch of hooligans but a moral protest for a cause which had motivated over a hundred thousand people in Britain alone to make a stand.

In the case of another defendant who was sentenced to 18 months imprisonment last Friday, he attended the protest just days after two of his cousins had been murdered by Israelis in Palestine. It may be entirely the fault of his legal defence not to have raised this in terms of the effect it would have inevitably had on his mental state. Nevertheless, the judge was aware of the facts and while he said he that he took it into account, the sentence he passed suggests otherwise.

Police misconduct during the riots.
Another issue pushed to one side by the court was the behaviour of the police throughout the protest. The young man mentioned above now serving 2 years in a young offender's institute, for example, said that the catalyst for his offence was being hit on the shoulder by a police baton. He also suggested that heavy-handedness by the police towards some women during the protest prompted many of men to react violently. The judge discounted this entirely, saying that of the 33 official complaints made against the police none were upheld. He failed to mention, however, that the complainants are now bringing civil actions against the Metropolitan Police because they are dissatisfied with the outcome of their complaints.

The judge also insisted that he had reviewed the police CCTV evidence as well as footage from SKY TV and had seen no evidence of police manhandling the women or of any police misconduct. Again, the defence team should have drawn to his attention a report such as that prepared by the Islamic Human Rights Commission which cites many sources and eyewitnesses supporting the defendants' claims. Even a quick Google search would have given the defence some footage showing police malpractice.

Harsh sentences intended to deter violent disorder or to deter protesters altogether?
Fears that the sentences would be of a severity sufficient to deter others rather than just punish the offenders - as mentioned by MEMO in a recent article were confirmed when the judge said as much. He made it very clear that the harsh sentences were being issued, in part, to make an example of the protesters before him and to send a clear message that violent disorder in such a context was not to be tolerated. In passing his judgement, the judge made it abundantly clear that "those who take part do so at their peril." He said that the public is entitled to look to the law for protection and that the number of people involved in the protest and the level of violence were aggravating factors. He admitted that the right to demonstrate is a hallmark of a strong democracy but said that what happened on that day went far beyond being lawful. Part of the reasoning he gave in passing his judgments was that the defendants had been in the "middle" of the crowd when violence broke out, or at the "front", implying that their presence alone was enough to warrant punishment.

The question is, though, who was he trying to deter? As he said himself, the protesters before him all matched a similar profile. They were young men (primarily between the ages of 18-22) most of whom are of "previously good character", they did well educationally and had bright prospects for the future. Many did volunteer work and other useful social activities in their free time. The judge admitted in his summing-up of each of the cases that MEMO sat through that none of the young men had set out deliberately to cause any trouble and he accepted that none of the misconduct had been premeditated. He made reference to the fact that no weapons had been brought from home and that no disguises, such as balaclavas, had been worn and that essentially they had all just got caught up in the events of the day. He made the point that there seemed to be a type of "mass-hysteria" afflicting the crowd and that the protesters simply got caught up in the events

In which case, who is he trying to deter by these sentences and what is he deterring them from? If he is trying to deter similar offenders, that means he is trying to deter other young men of good character and good educational and behavioural backgrounds. But what is he deterring them from? Is he trying to deter them from committing acts of violent disorder? Logic dictates that you cannot deter someone from a non-premeditated, spur of the moment act as committed by these young men and as admitted by the judge. That leaves us to conclude that part of the intention is to deter people from protesting altogether, which would be a travesty of justice in and of itself.

When Israel acts the way it did in December 2008-January 2009 and the evidence of its war crimes is transmitted into every household and no one with any power does anything to stop the Zionist state, it is vital that brave individuals such as those who came out in their hundreds of thousands to protest, feel safe enough to do so. It is important that protests are held in accordance with the law and in a peaceful, safe and lawful manner. Of that there is no disagreement. But when things go wrong it is also vital that the police and the courts take into account the context in its entirety. Instead of trying to deter people from protesting at all, they should work together to make sure that future protests do not degenerate into violence; that requires some modification of police behaviour and tactics as much as anything else. Lawful protest is a hallmark of our democracy and must be catered for in a safe environment. Protesters and police officers, please note.