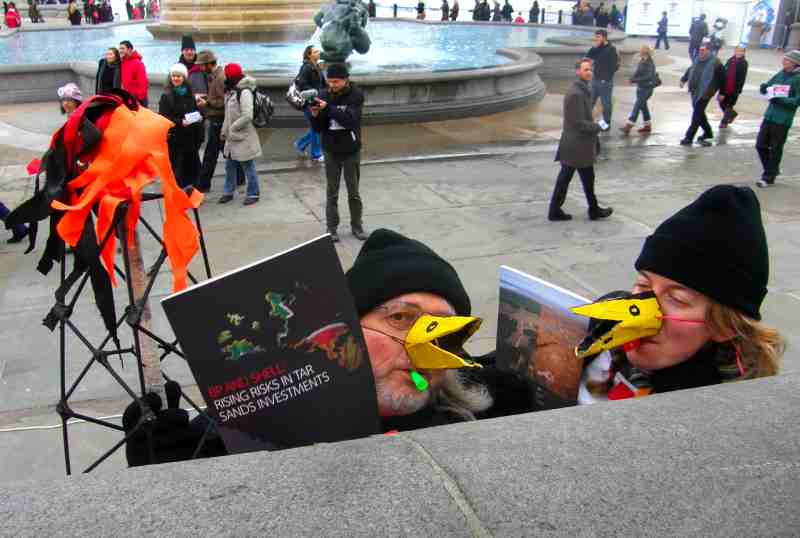 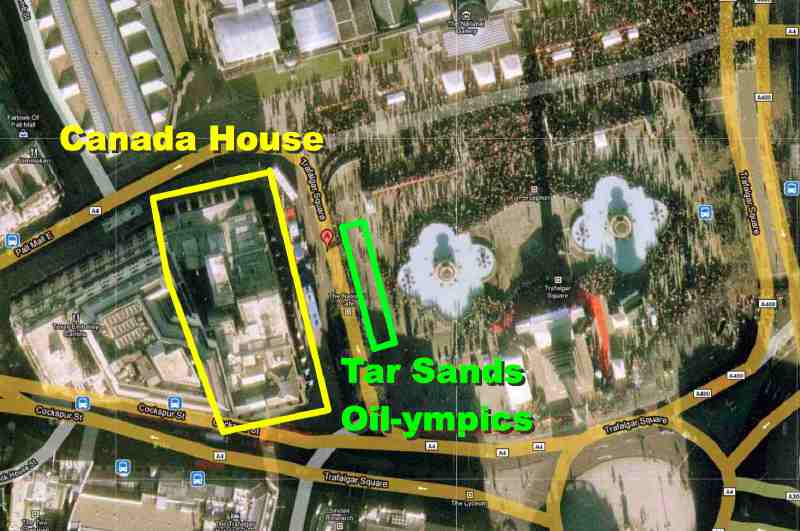 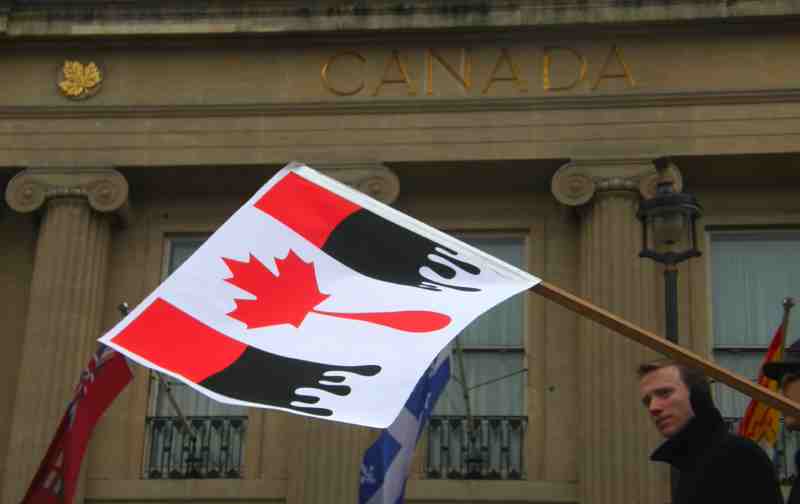 B1. Subvertising the Canadian Flag 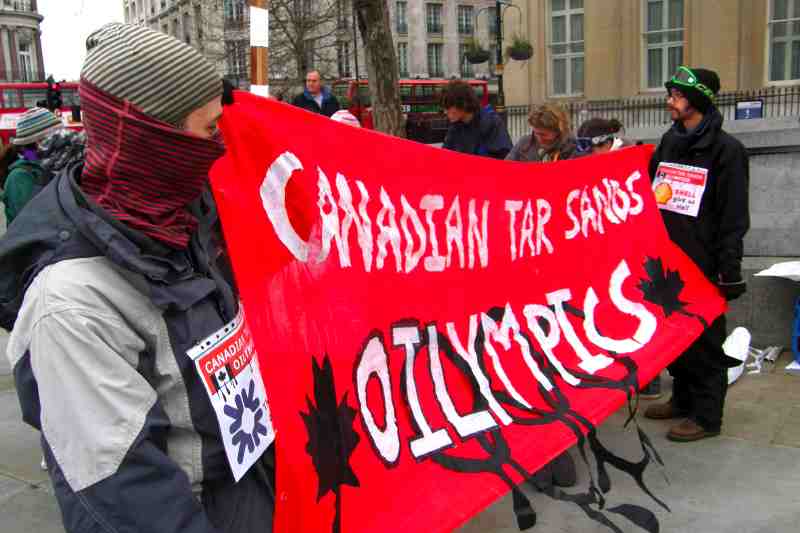 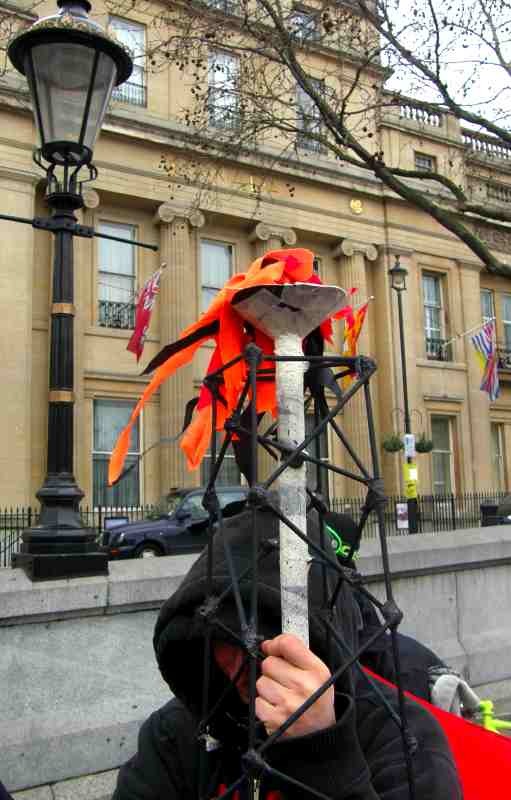 B3. The Filthy Dirty Oil-ympic Torch 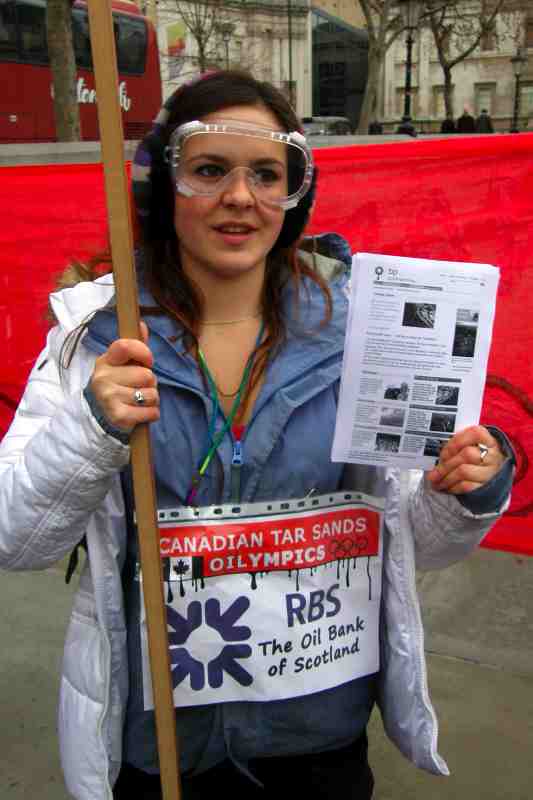 B4. Oil Bank of Scotland Competitor 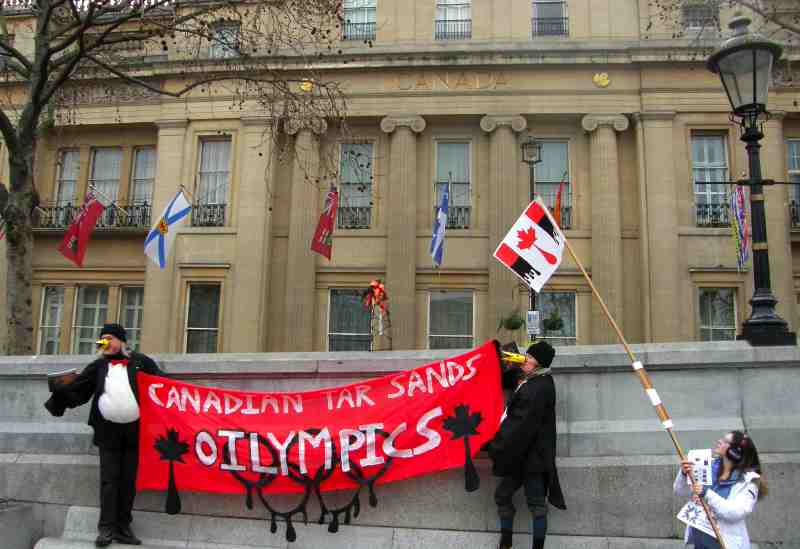 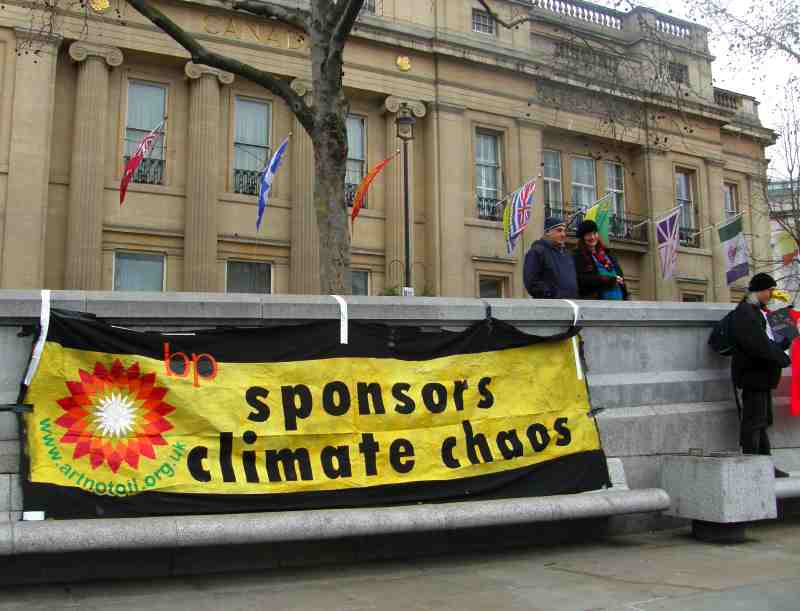 B6. Get Your Dirty Sponsorship Off Our Art! 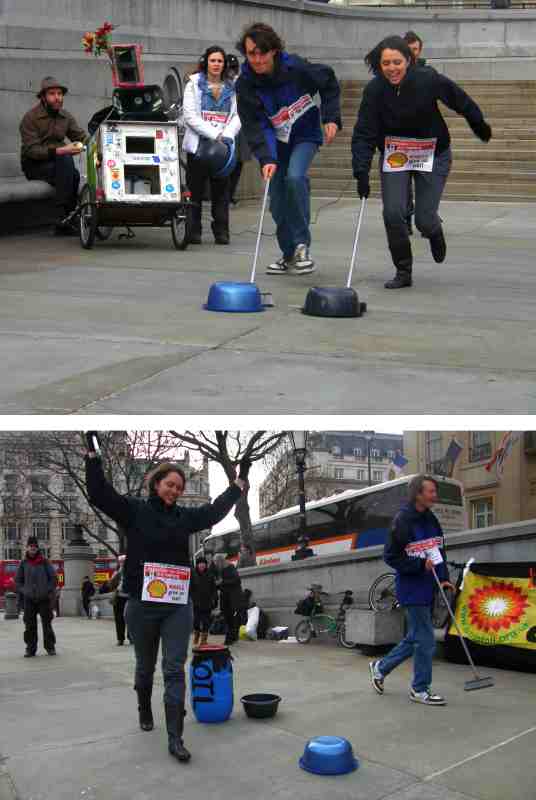 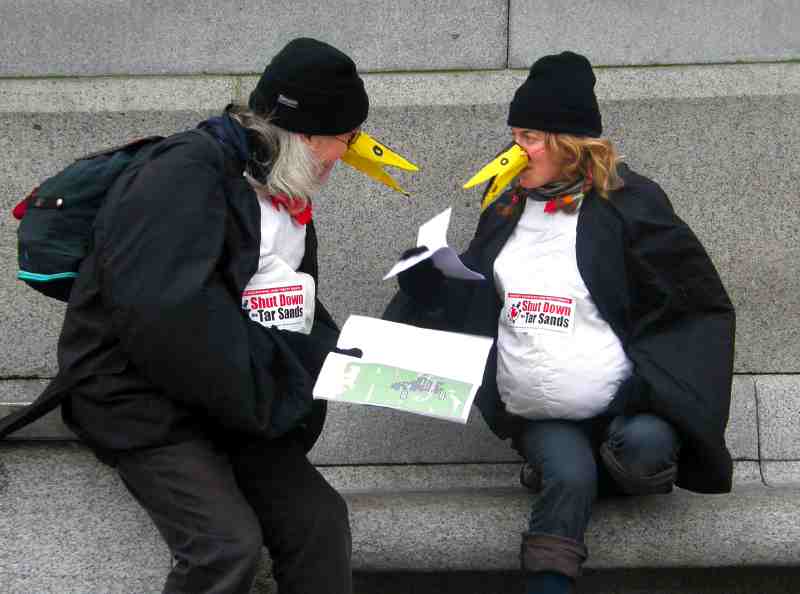 B9. Penguins Confer on Shutting Down the Tar Sands 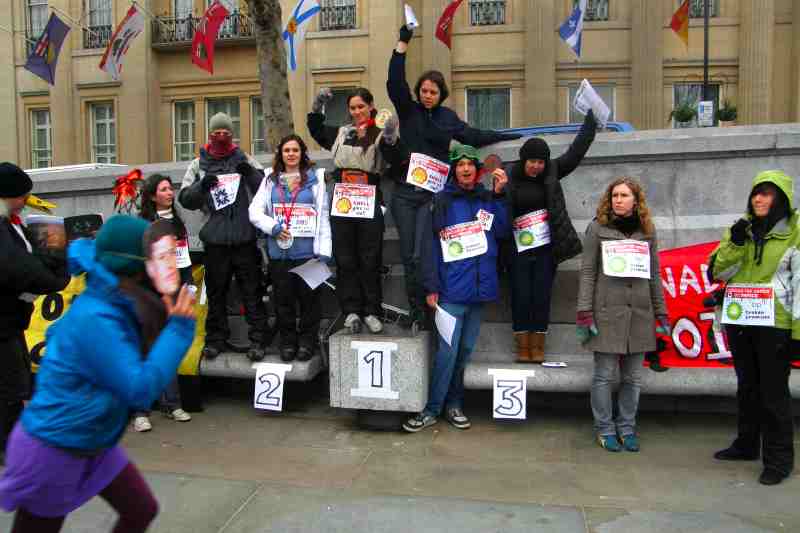 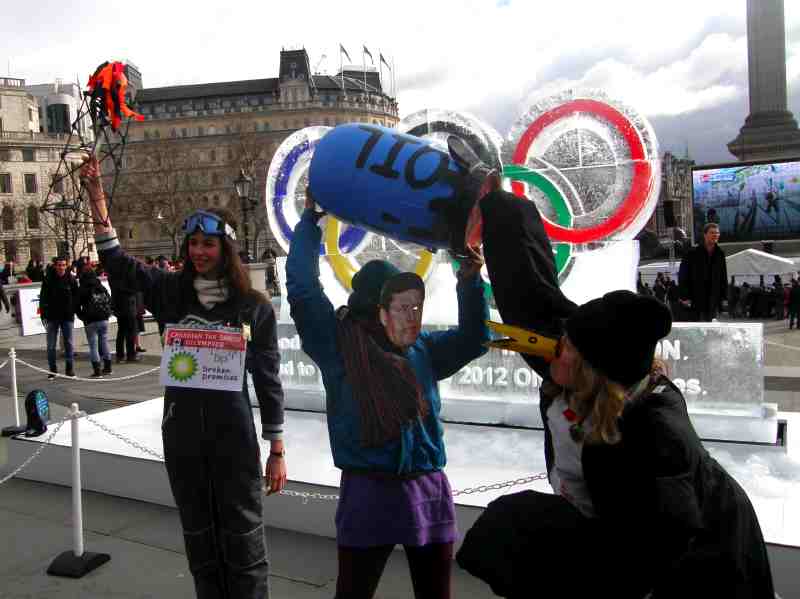 
Action Report
If the Great COP-15 Cop-Out in Copenhagen in December 2009 was a disaster for the false corporate "green" capitalist solutions to our catastrophic climate chaos crisis, then it could well turn out to be a victory for everybody else – in that it was a founding moment for the globalisation of a powerful Climate Justice International movement. In a similar way to the manner in which the anti-WTO Seattle protests of 1999 catalysed the blossoming of anti-capitalist social movements the world over, so too the convergence of those movements with climate change activists in Copenhagen is catalysing the blooming of a Climate Justice International, reflected is initiatives like the Climate Justice Action network, and the forthcoming "Peoples’ World Conference on Climate Change and Mother Earth’s Rights" in Cochabamba, Bolivia, in mid-April 2010.

Of the video activist coverage of the Copenhagen days I've seen [1], by far the most powerful was the protest led by our First Nations sisters and brothers outside the Canadian embassy. Who could listen to the anguish and anger of mother and daughter Susan and Eriel Deranger and NOT be moved to solidarity action? If Shell's Corrib gas climate crimes next door in Ireland demand solidarity actions on the street of London [2], how much more does the biggest single industrial climate crime on Earth demand we demonstrate our solidarity with Albertan (and global) ecology and the Chipewyan people?

After a very well attended 'Film Night and Action Planning Meeting' at the end of January, London Rising Tide most effectively turned concern into consequences, with the staging of the The Canadian Tar Sands Oil-ympics and the founding of the London Tar Sands Network group. Among the official, state-funded hullabaloo celebrating the opening day of the Canadian Winter Olympics, we had teams representing the biggest British climate criminals in the obscene oil-rush to the tar sands – BP, Shell, and RBS (the Oil bank of Scotland) – competing in reality-puncturing sporting events. With eco-sound from Bicycology, we lampooned Canadian Prime Minister Stephen Harper's craven welcome to foreign oil corporations to f*ck up Canada's native lands and peoples for a fast buck.

If 'Tar Sands' means little to you, take a listen to Jess Worth, of the UK Tar Sands Network, telling it like it is after the awards ceremony:
• Tar Sands Oil-ymics - Jess Worth Interview
» LINK to follow shortly in a comment below, once editing and uploading is complete


Whatever Next?
The Great COP-15 Cop-Out demonstrated the practical bankruptcy of the global capitalist class, a house divided amongst itself by national borders and competing power blocs, in even attempting to address our our catastrophic climate chaos crisis. So for a liveable world, we need to sweep aside these barriers to real solutions – national borders and the capitalist ruling elites who maintain them – into the dustbin of history where they belong. To do so, we need to make ourselves ungovernable by the bosses' representative democracy, because we are supplanting their class dictatorship with our own direct democracy – exercised through People's Assemblies.

To that end...
• Climate Camp UK have initiated an informal People's Assemblies working group; while
• the Election Meltdown collective are actively planning to convene a People's Assembly on May Day, Saturday 01 May 2010, in Parliament Square, after four or more May Day Carnival Parades converge there.


Fossil Fool's Day – Pull a Prank that Packs a Punch!
• WHEN: Thursday 01 April, 2010
• WHERE: Your Town, Planet Earth
• WHAT: Actions, Jokes and Pranks Galore to Stop the Fossil Fools
» website –


BP Fortnight of Shame
• Thursday 01 – Thursday 15 April, 2010
• Look out for further details from Rising Tide and others


My apologies for the delay in my reporting on this event, but I have been tied up with creating communications infrastructure for the Election Meltdown collective, and promoting EM plans for a People's Assembly in Parliament Square, London on May Day, Saturday 01 May 2010, at the Climate Camp National Gathering in Bristol last weekend.


All these photos and video clips are 'CopyLeft'
This means you are free to copy and distribute any of my photos and videos you find here, under the following license:
• Creative Commons Attribution-Noncommercial-Share Alike 3.0 Unported License
»